WHEN the Germans invade the Soviet Union  inn 1941, they thought victory would be swift. It wasn’t. It never came. German aggression cost millions of lives and created untold suffering. One plan was to coerce the Soviets into surrender. The German war machine created posters and leaflets exhorting Soviets to defects to a place of warm welcome, good medicine and lots of food. Fighting on was useless. Surrender was the only way to preserve life and limb. Surrender meant no longer working for the Jews – yep, those same Jews the Germans were slaughtering by the million.

If the German plan to murder their way to victory was not enough, they would invite you to join them. 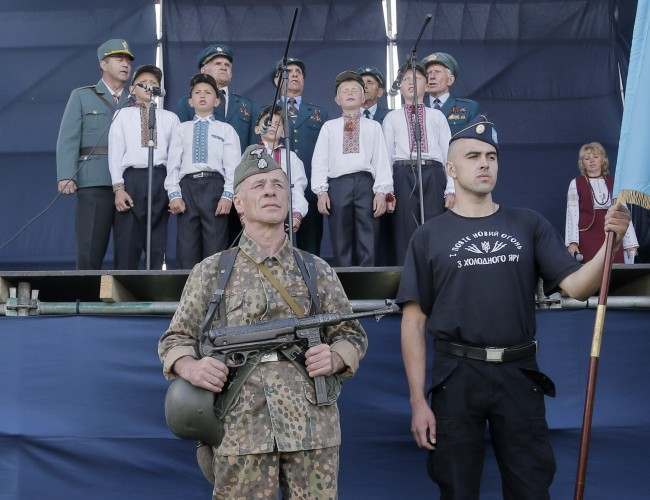 Two Ukrainians, one of them dressed in the SS Galychyna Division uniform, stand in guard of honor as children and SS Galychyna Division veterans sing during commemoration events in front of a monument to SS Galyhyna Division near the village of Yaseniv in western Ukraine on Sunday, July 21, 2013. Western Ukraine marks the 70th anniversary of creation of the SS Galychyna Division (the 14th Waffen Grenadier Division of the SS, 1st Ukrainian), a World War II German military formation initially made up of volunteers from the region of Galychyna with a Ukrainian ethnic background. Formed in 1943, it was largely destroyed in the battle of Brody, reformed, and saw action in Slovakia, Yugoslavia and Austria before surrendering to the Western Allies by 10 May 1945. The Galicia Division has been accused of committing war crimes in Norway in 1943; suppressing the Jewish Warsaw revolt in April-May, 1943; of suppressing the Polish Warsaw uprising of 1944; of fighting in May 1944 in Italy against the allies at Monte Cassino, other was crimes. However, in Western Ukraine it is largely seen as national heroes because they were fighting for Ukraines independence from the Soviet regime. 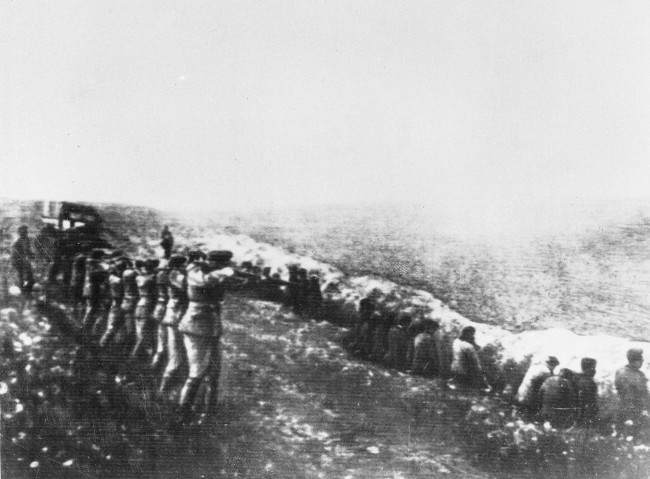 This photo was taken from a the body of a dead Germany officer killed in Russia, showing a German firing squad shooting Soviet civilians in the back as they sit beside their own mass grave, in Babi Yar, Kiev, 1942.

The pressure to join the Nazis was considerable: 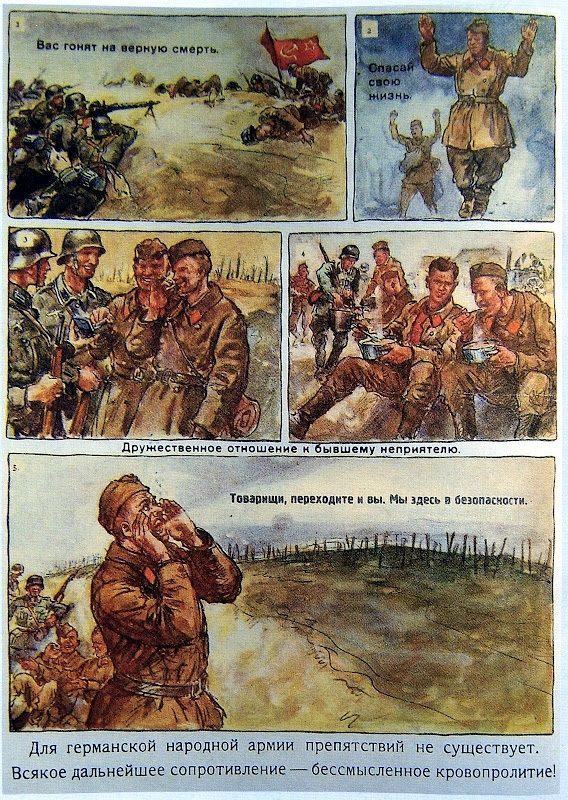 “You are sent to die! Save your life! Friendly attitude to the former enemy! Friends, you are safe here! There are no obstacles for the German Army, any further confrontation is a senseless bloodshed!” 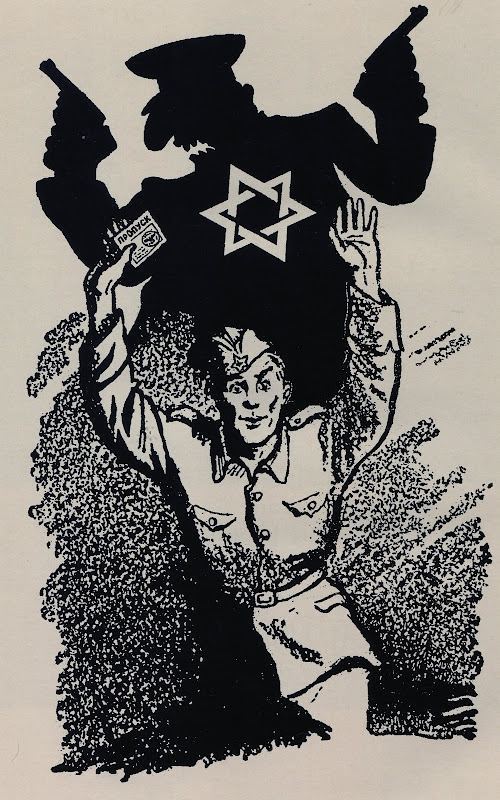 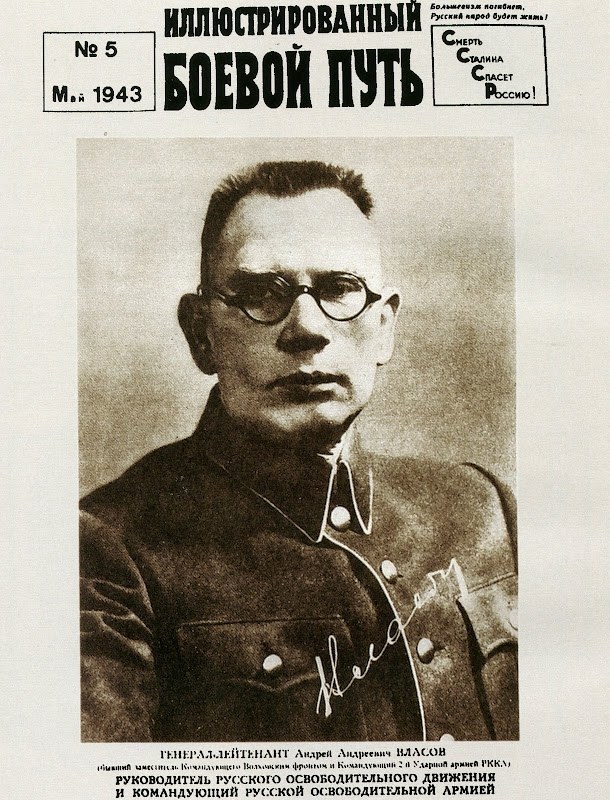 Head of the Russian liberation movement
“Bolshevism will die, Russian people will live”
“Stalin’s death will save Russia!” 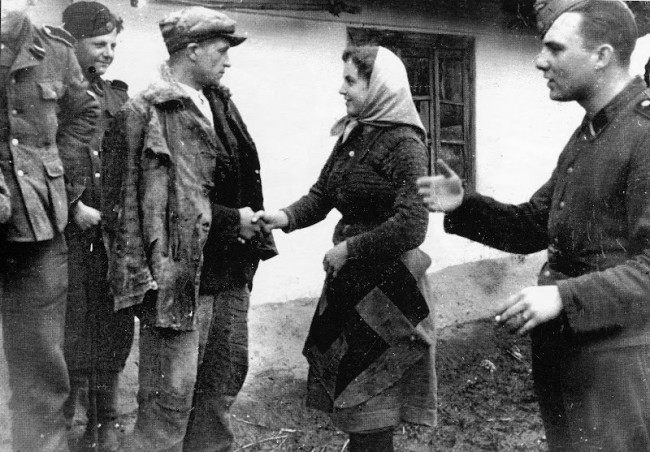 Parting with brother-volunteer of the 14th SS division, Western Ukraine, May, 1944 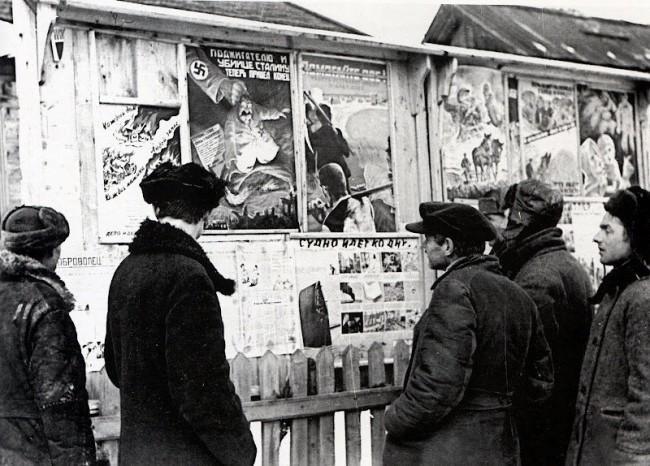 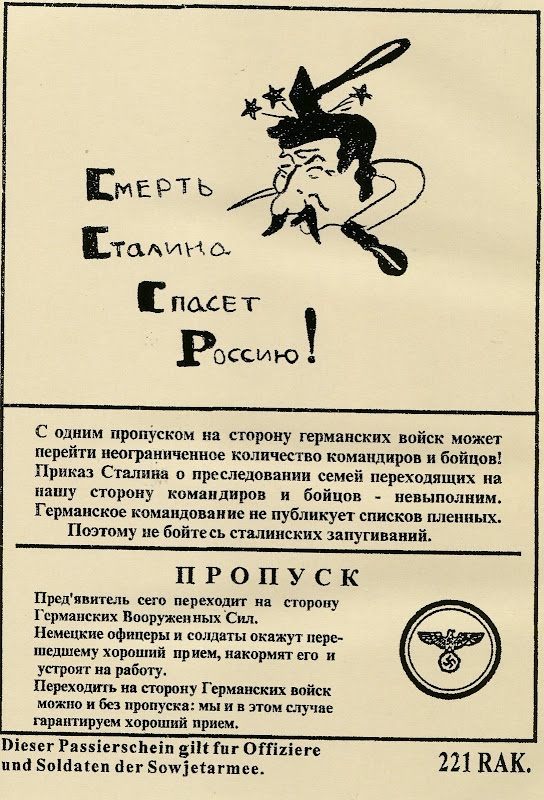 “Stalin’s death will save Russia!”
“One pass permitting to enter the territory of the German troops can be used by an unlimited number of soldiers and commanders! The order of Stalin about prosecution of the families coming over to our side cannot be executed. The German command does not publish lists of captives. So do not be afraid of Stalin’s intimidation.”
“The German officers will welcome, feed and employ you”. You can enter without a pass too and be guaranteed a warm welcome anyway.” 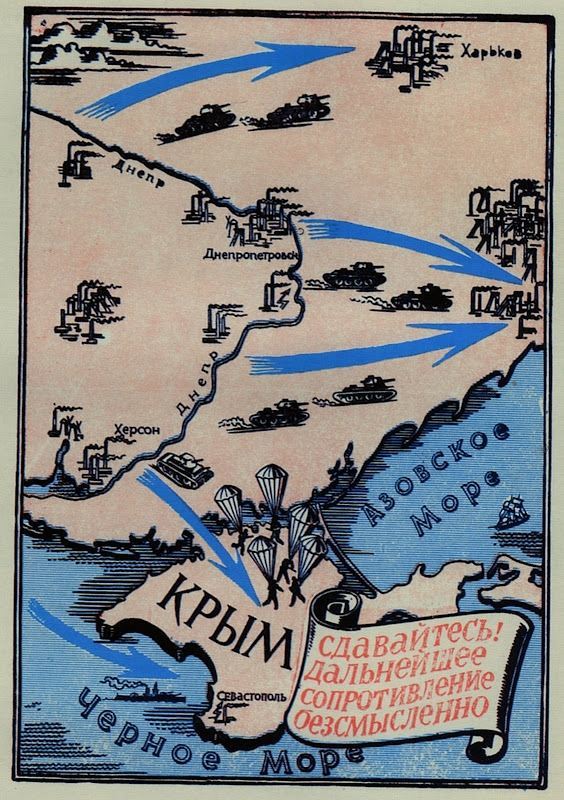 The Crimea – “Give up, further confrontation has no sense!” 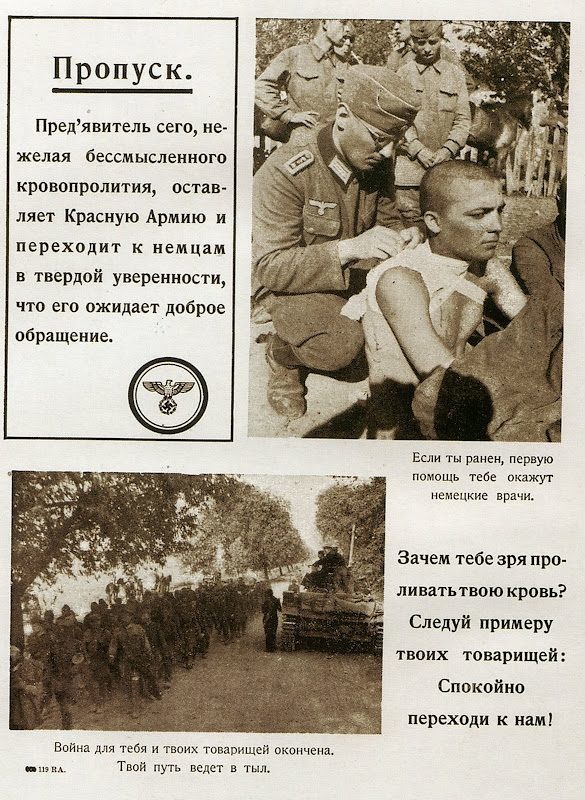 “The bearer of the pass unwilling meaningless bloodshed leaves the Red Army and comes over to the German side being sure he’ll get a kind treatment”.
“If you are injured you’ll get first aid from German doctors”.
“Why shed your blood for nothing? Follow the example of your friends: Come peacefully to our side!”
“War is over for you and your friends. You are going to the rear”. 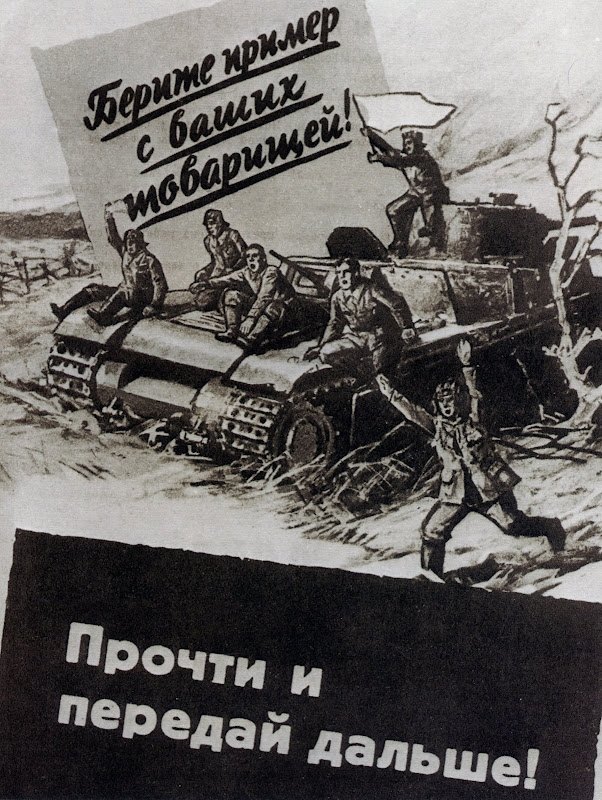 “Follow the example of your friends.” “Read and let others read too!” 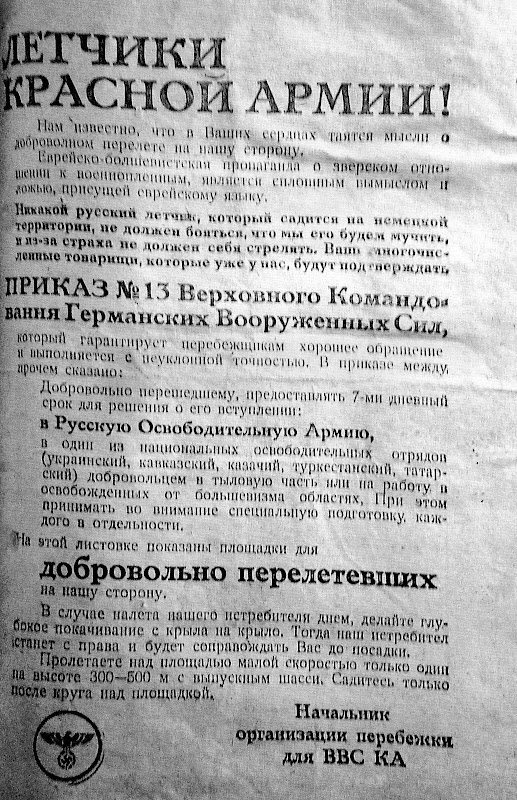 Agitation for pilots of the Red Army. “Come fly to our side!” “Jewish Bolshevist propaganda about the atrocious treatment of the captives is a mere lie so typical for a Jewish tongue!” “Your pilot landing on the German territory should not be afraid of torture and shoot himself.” 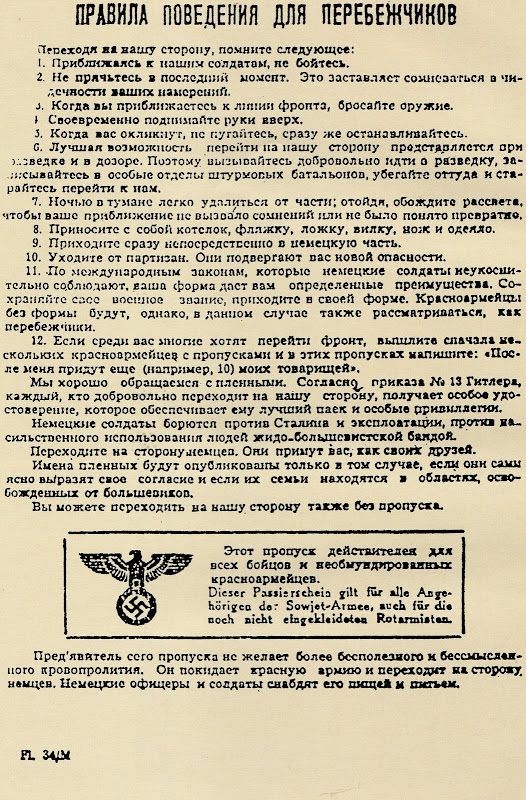 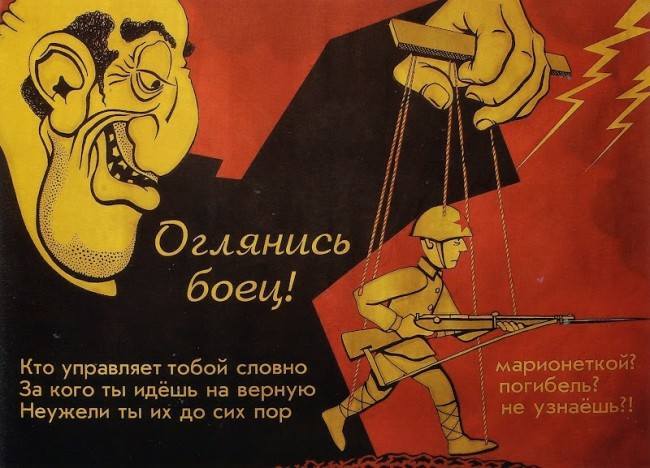 “Soldier! Look behind! Who controls you? Who sends you to die?” 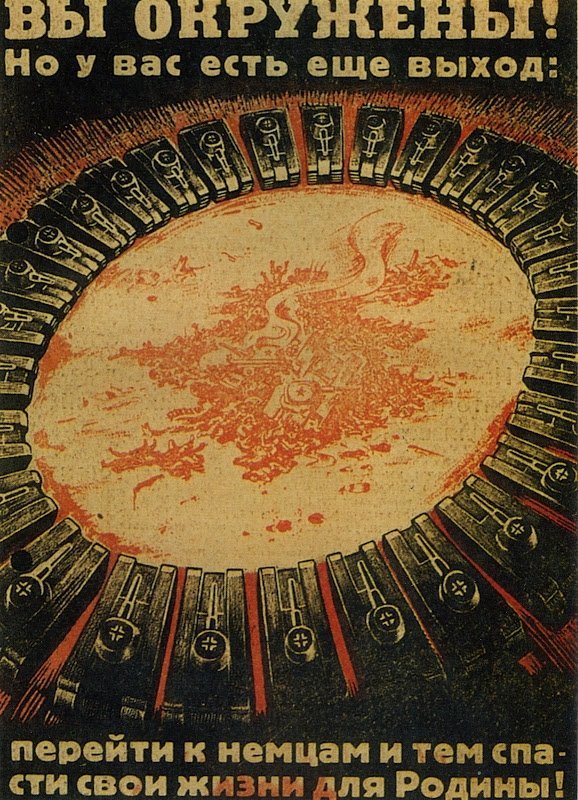 “You are encircled! But you still have a way out! Come to the German side, save your lives for the motherhood!” 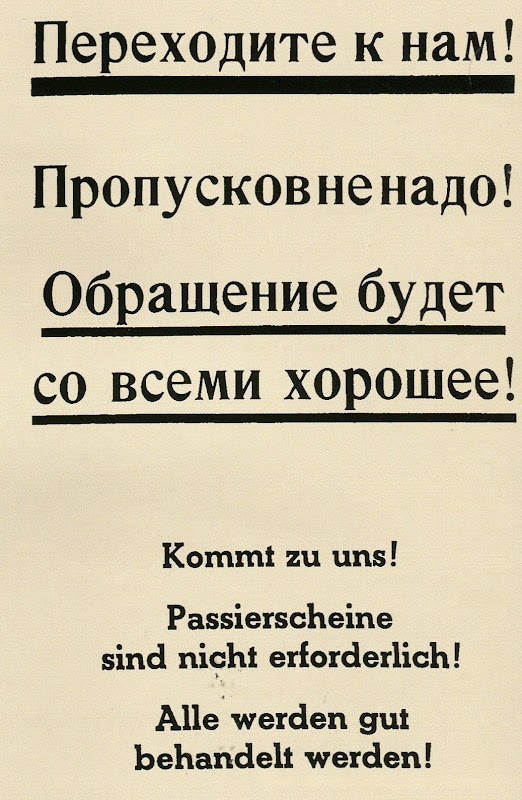 “Come to our side! No pass is needed! Everyone is welcome!”