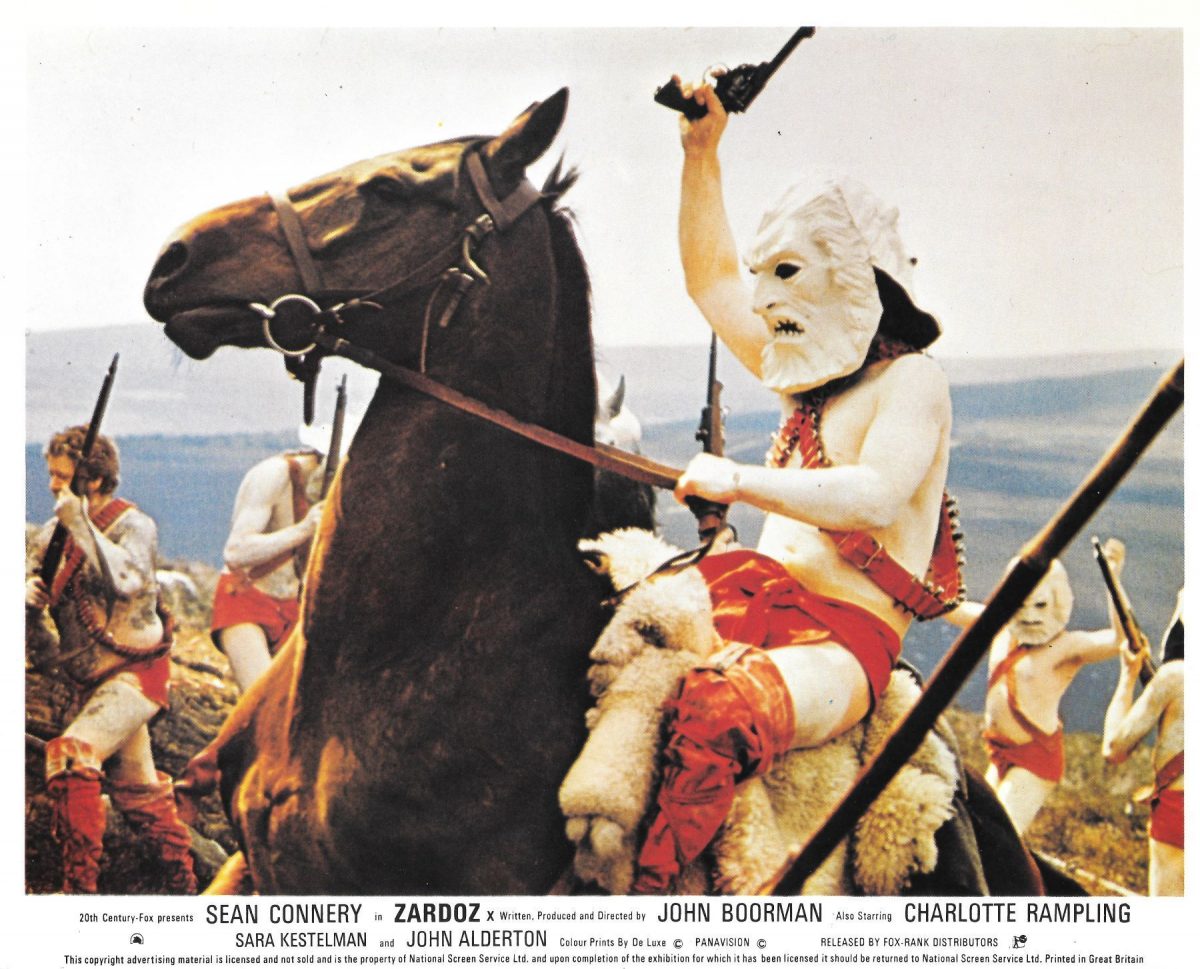 Let’s begin with a hit. John Boorman‘s Deliverance. It was a blockbuster. Boorman was hot. Not only had he scored an international hit with Deliverance, he had made it for an itsy-bitsy, teensy-weensy budget. Moreover, he’d cast relative unknowns or stars at the start of their careers. Boorman had gone against the studio on this. They’d wanted BIG names. Jack Nicholson and Marlon Brando to be exact. They were to star in the roles eventually taken by Jon Voight and Burt Reynolds. But Boorman disagreed and held his own.

Boorman: Can you imagine trying to get Marlon Brando into a canoe? ‘Can’t you do that with stuntmen?’ he would say. Marlon Brando and Jack Nicholson would have been a disaster.

The studio was still keen. It was Nicholson’s demand for a fee of $500,000 that nixed the idea. Deliverance cost $2m to make and earned $46m at the box office. Boorman was now King of the Hill and he could make whatever film he liked. 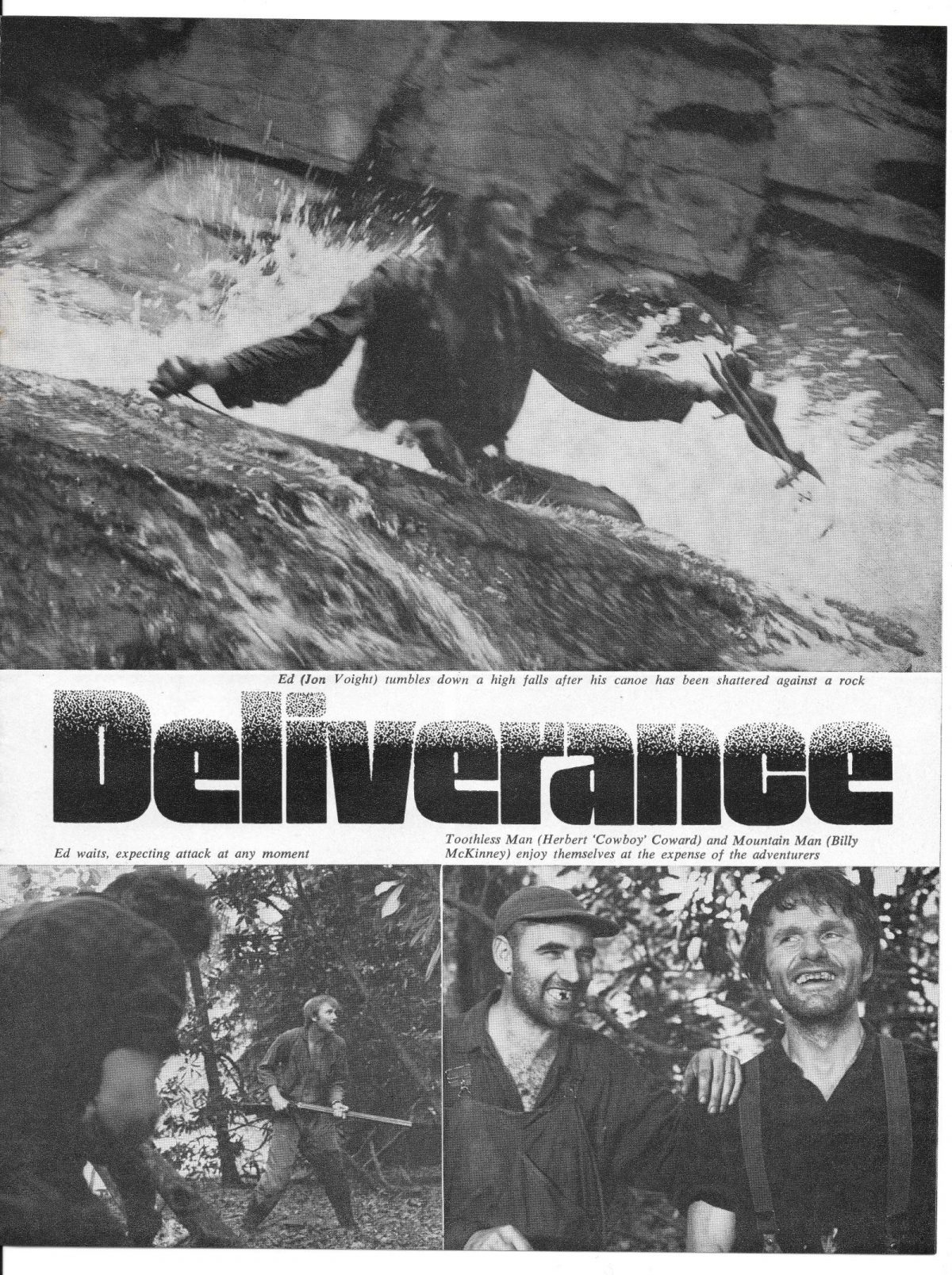 He was offered The Exorcist to direct. He read the script and knocked it back. He didn’t want to make a movie about “a child being tortured”. Boorman was then asked what he did want to make.

He thought back to his film Leo the Last and its theme of the rich exploiting the poor:

We, the people of the developed world, are extending our lifespan through advances in medicine, while the majority of the world is getting poorer and more abject. I wanted to project this tendency into a future were immortality had been achieved. How would this elite protect itself from the huddled masses? Living in Ireland the answer was all around me. The Catholic Church had controlled and oppressed a nation in a way that England had been unable to achieve through force of arms. So my elite would invent a religion. 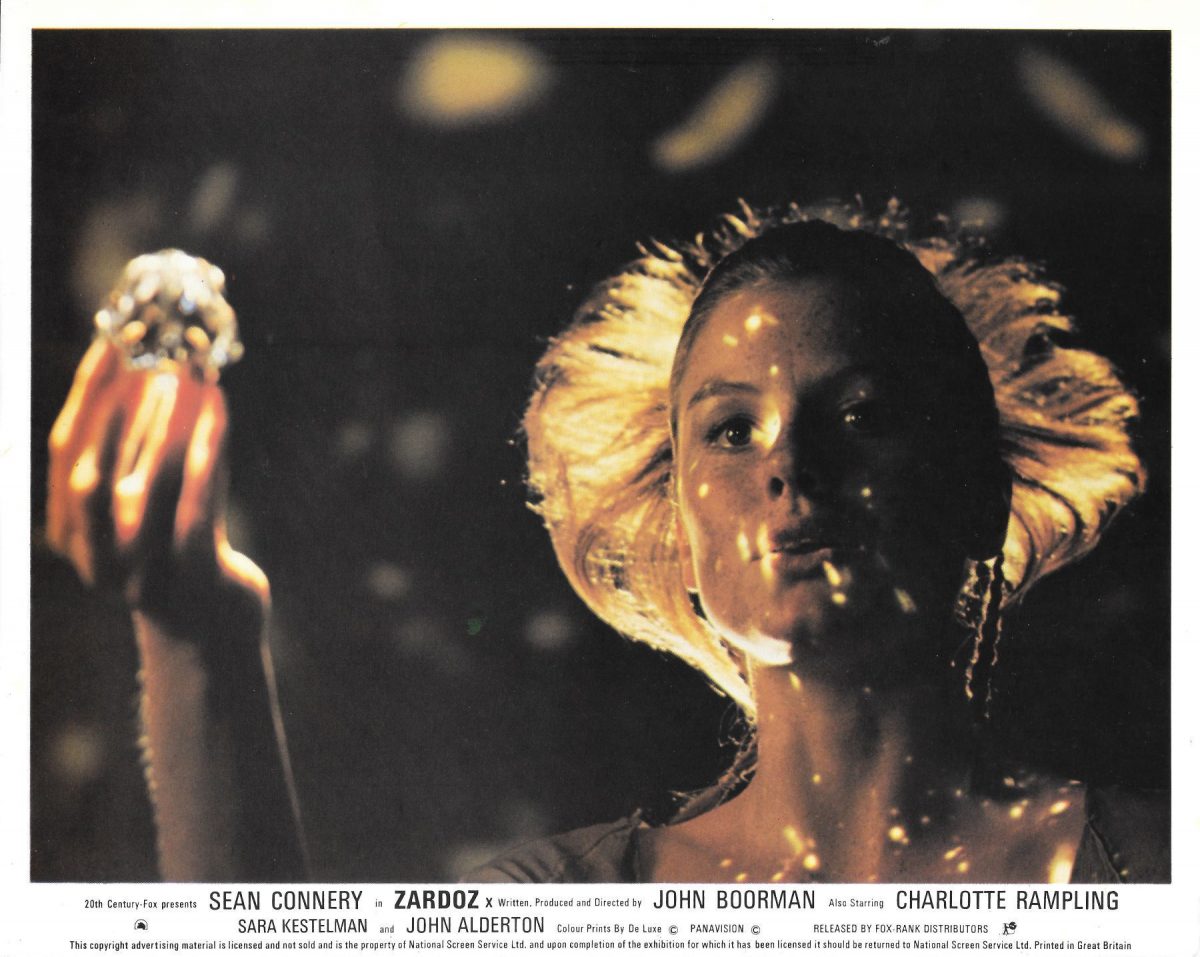 Boorman returned home to Ireland to write his screenplay. As he developed his themes, he created different categories of people based on their response to immortality:

…the Apathetics who had lost interest in living, the Renegades who wanted to die. Crimes were punished by ‘ageing’–by one, five or ten years, depending on the seriousness of the misdemeanour. Consequently, the Renegades were mostly ancient whilst the Eternals were perpetually youthful. There were, of course, no children.

Outside this idyllic commune, the Vortex, lay the Outlands, peopled by the Brutals. Zed was a Brutal of great physical and mental prowess. He discovers that the God who rules them, Zardoz, is a version of the ‘wiZARDofOZ’, a terrifying stone head that flies across the Outlands and commands their lives. This trick has been devised by Arthur Frayn, a Merlin surrogate. Zed uncovers this elaborate conspiracy and penetrates the Vortex to wreak revenge on his masters. 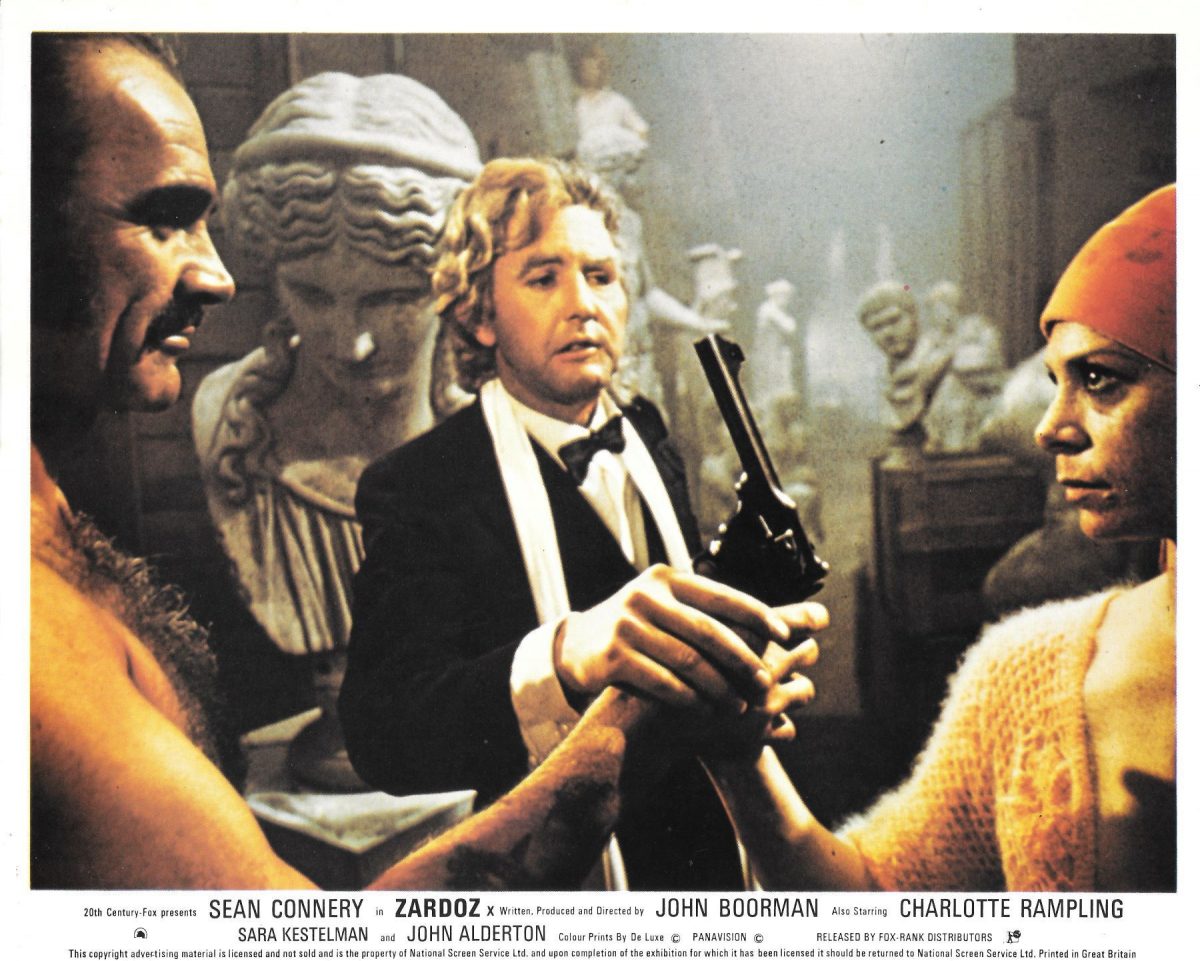 When Boorman sent the script over to 20th-Century Fox, the studio wasn’t so sure. Boorman’s agent set up a deal. Send over your head of production, get him to read the script and let him say “Yes” or “No” and we’ll have a deal for $1m. This happened. A slightly jetlagged exec arrived in Ireland. He was shuffled into an office with Boorman’s script. An hour-or-so later, a bedraggled, tired and confused looking head of production stumbled out of the office. Before he could say “Yes” or “No”, Boorman’s agent stepped forward shook his hand and beamed the warmest of smiles at him and said something like, “Congratulations, you got the best movie yet.” The deal was sealed. The head of production was sent back to 20th-Century Fox on the next plane out. 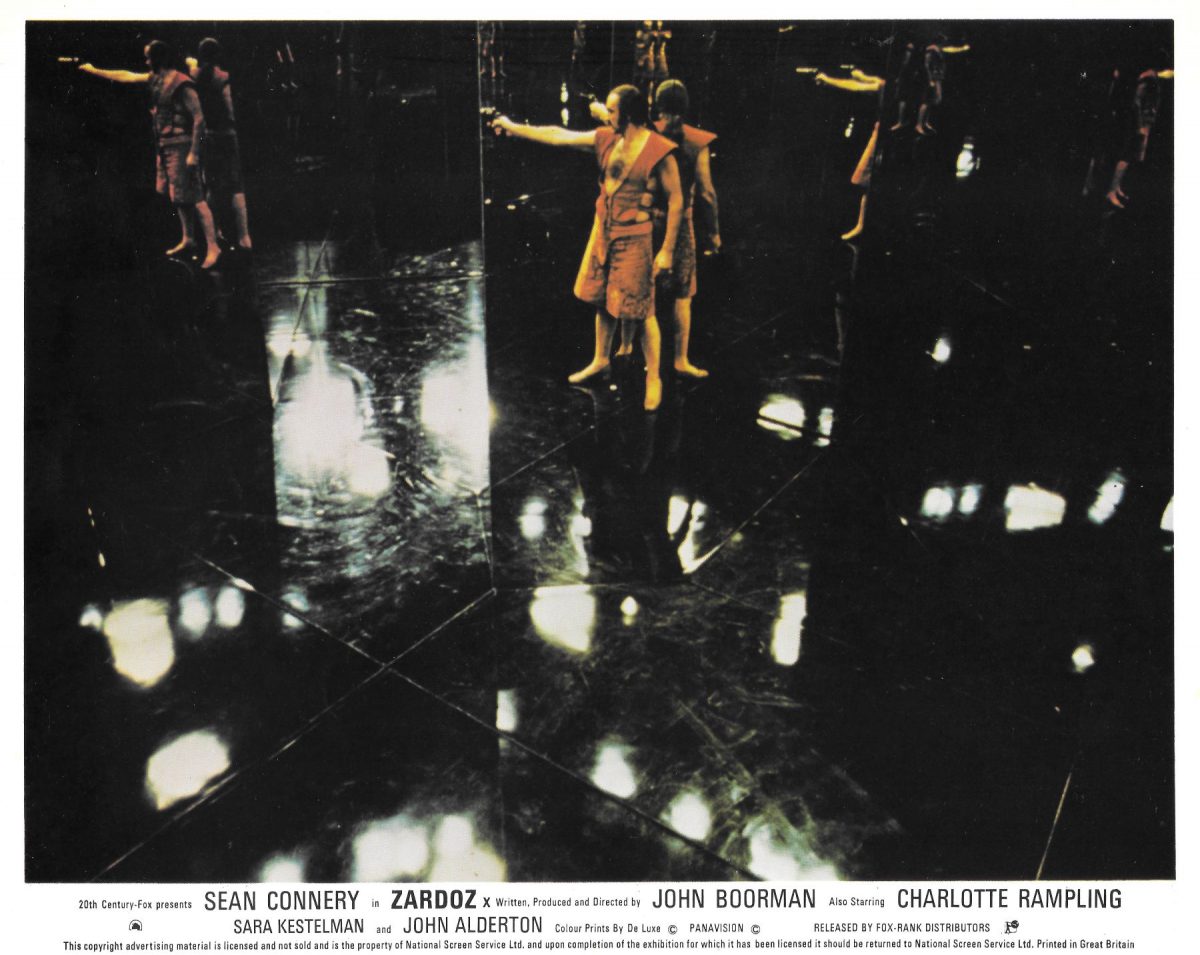 Boorman: I made the Zardoz for a million dollars. Negative pickup. I paid Sean Connery $100,000 and made the whole film for $900,000. We were short of money. I could have done with a bit more money on the picture to get a bit more scope. Anyway, it didn’t do that job of luring people in. Most people didn’t get it. It didn’t lure them in as I hoped it would. The interesting thing about that picture is that it has gathered a reputation year-after-year and 20th-Century Fox called me up and said would I restore the film with them? And I said, ‘Yeah, but why are you doing it?’ They said, ‘Every year we get more and more interest in it.’ I know from my own experience (people writing to me and so forth) it has an enormous following. There’s a German artist, very well-known, he’s obsessed by Zardoz. You know the end of the film? When a baby’s born and grows up to be a boy and then he just walks away without looking back? Well, this German artist said to me, ‘I am that boy.’ A couple of days ago, he sent me two flags of complex design which contain all the elements of Zardoz. 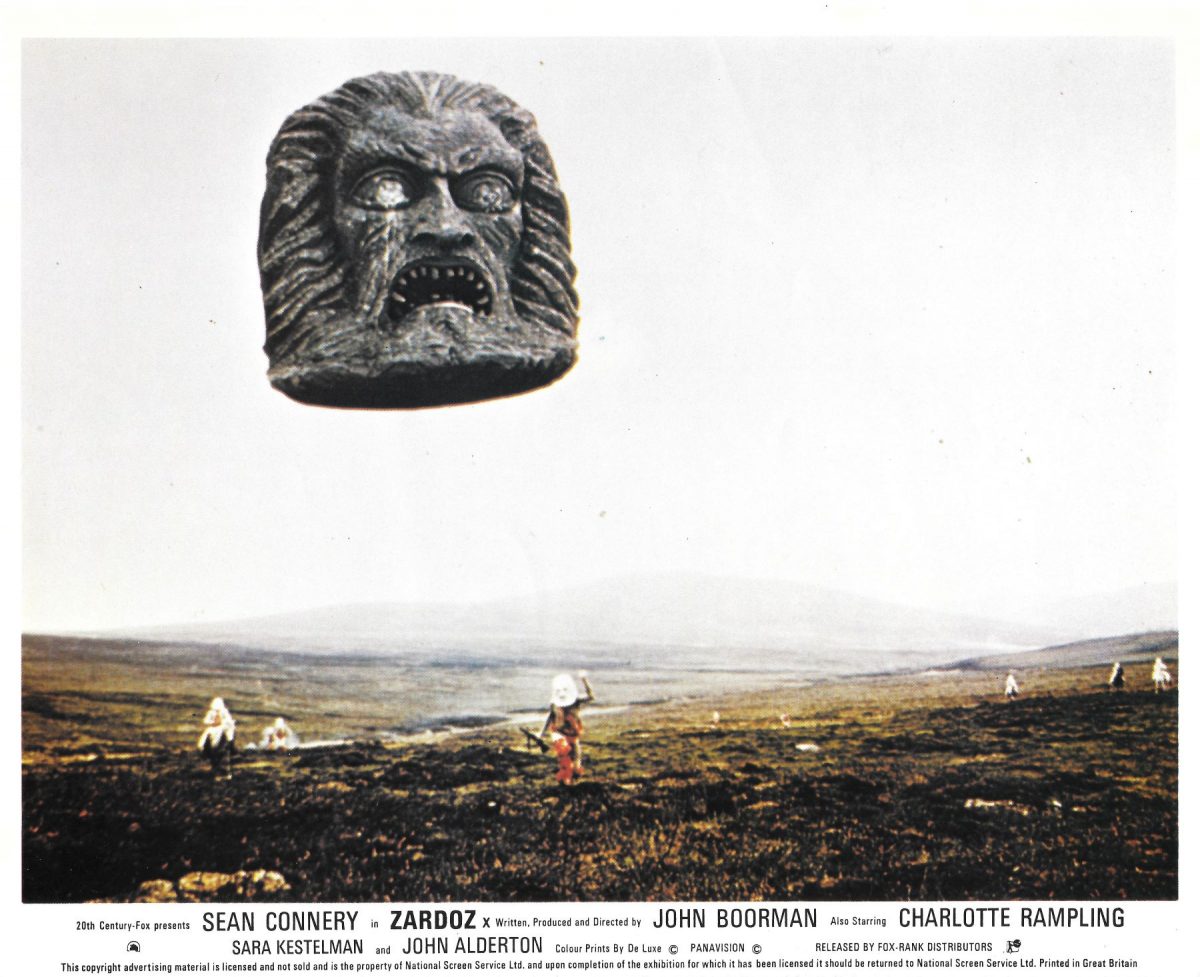 Zardoz opened on February 6, 1974. The studio 20th-Century Fox were unsure about the film. They made Boorman add an introductory piece to camera from Arthur Frayn (Niall Buggy) and suppled copious notes and interview in the press packs for journalists. 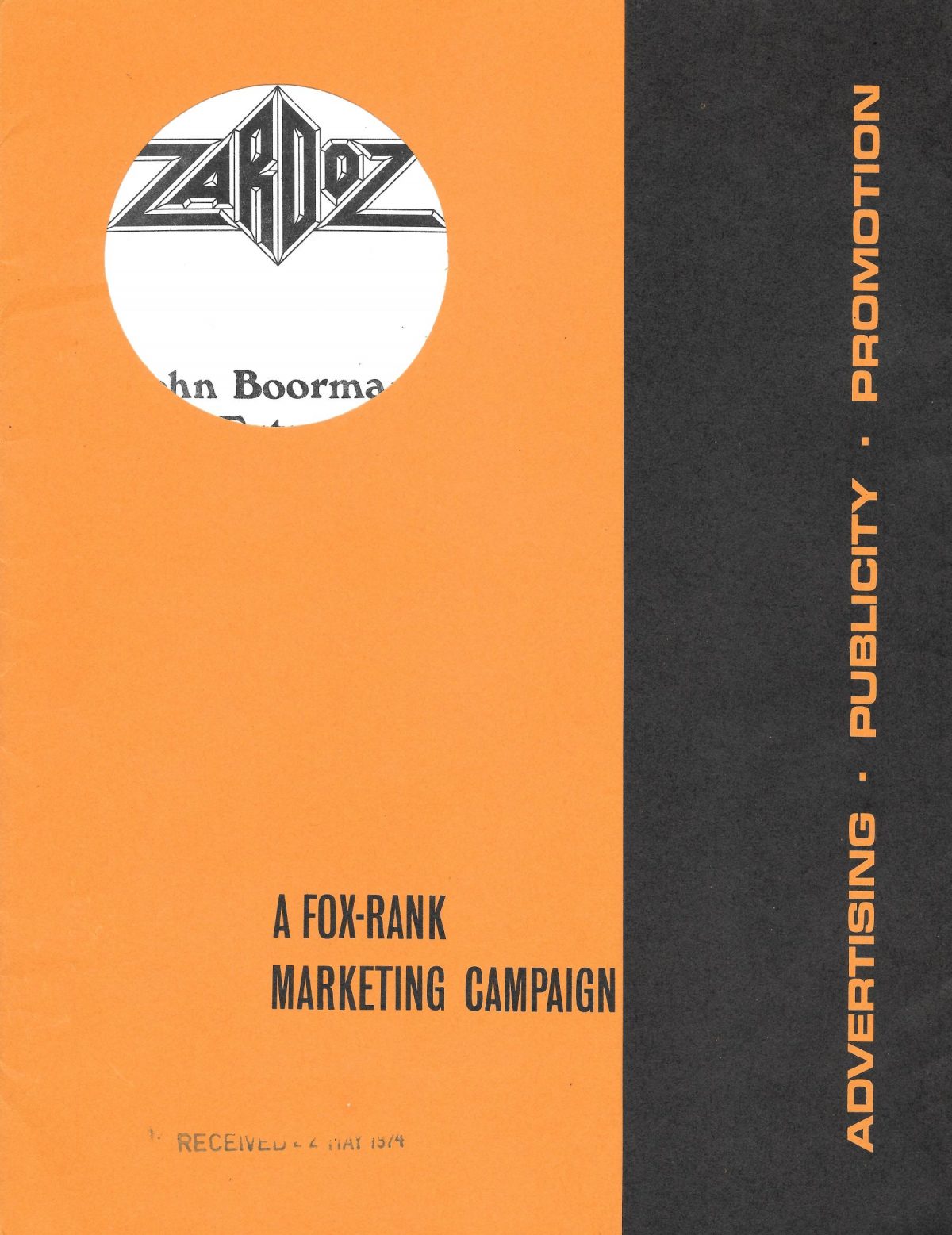 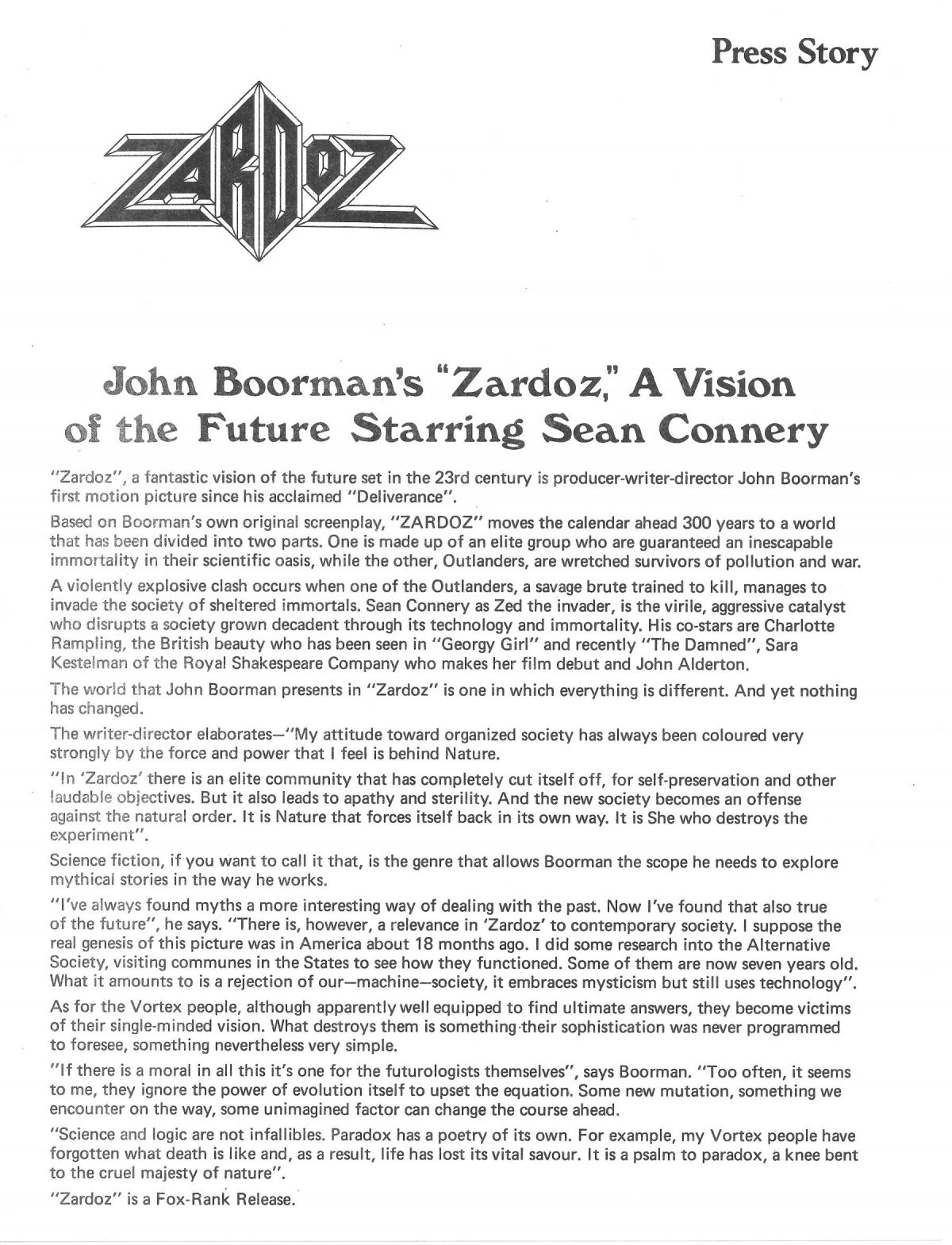 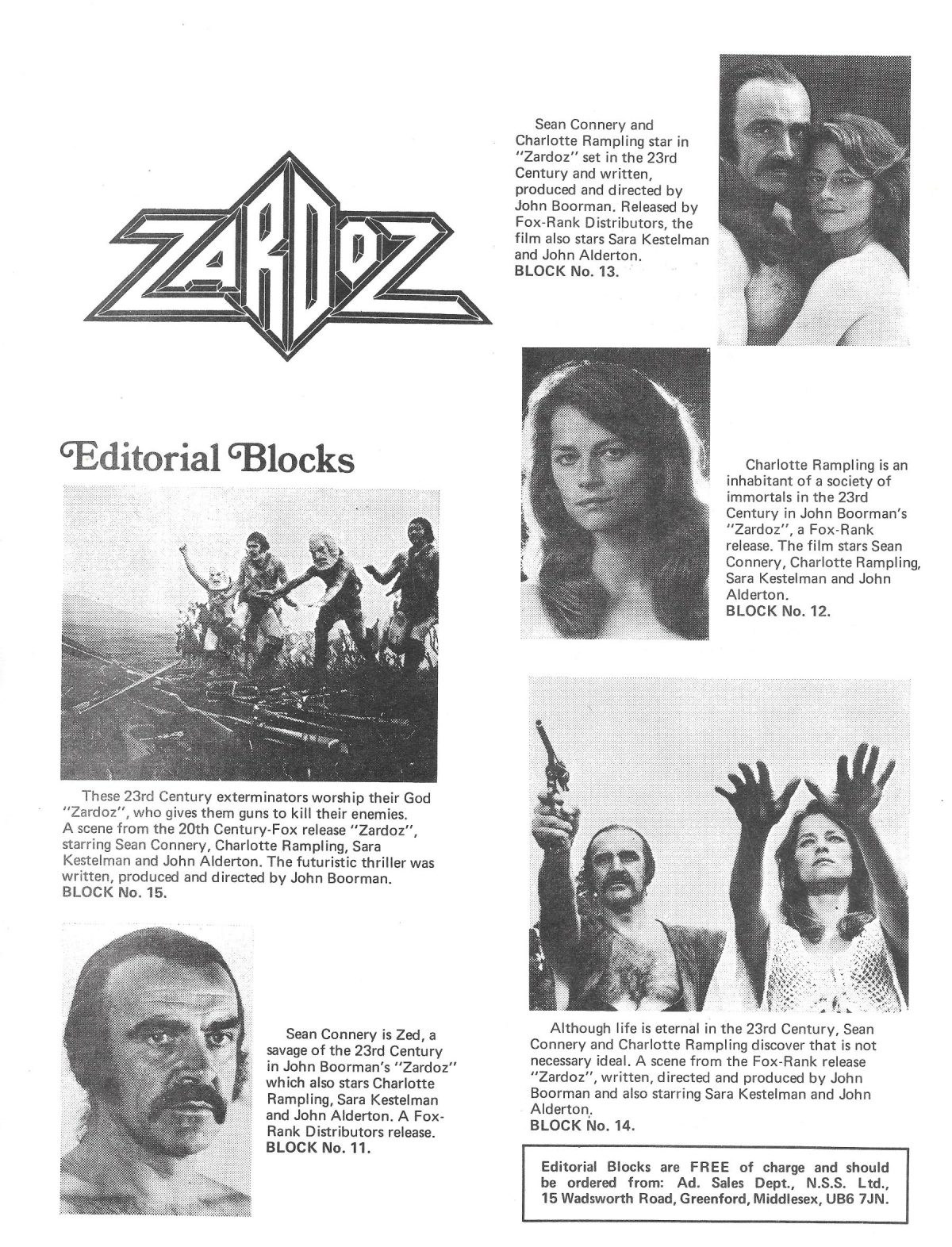 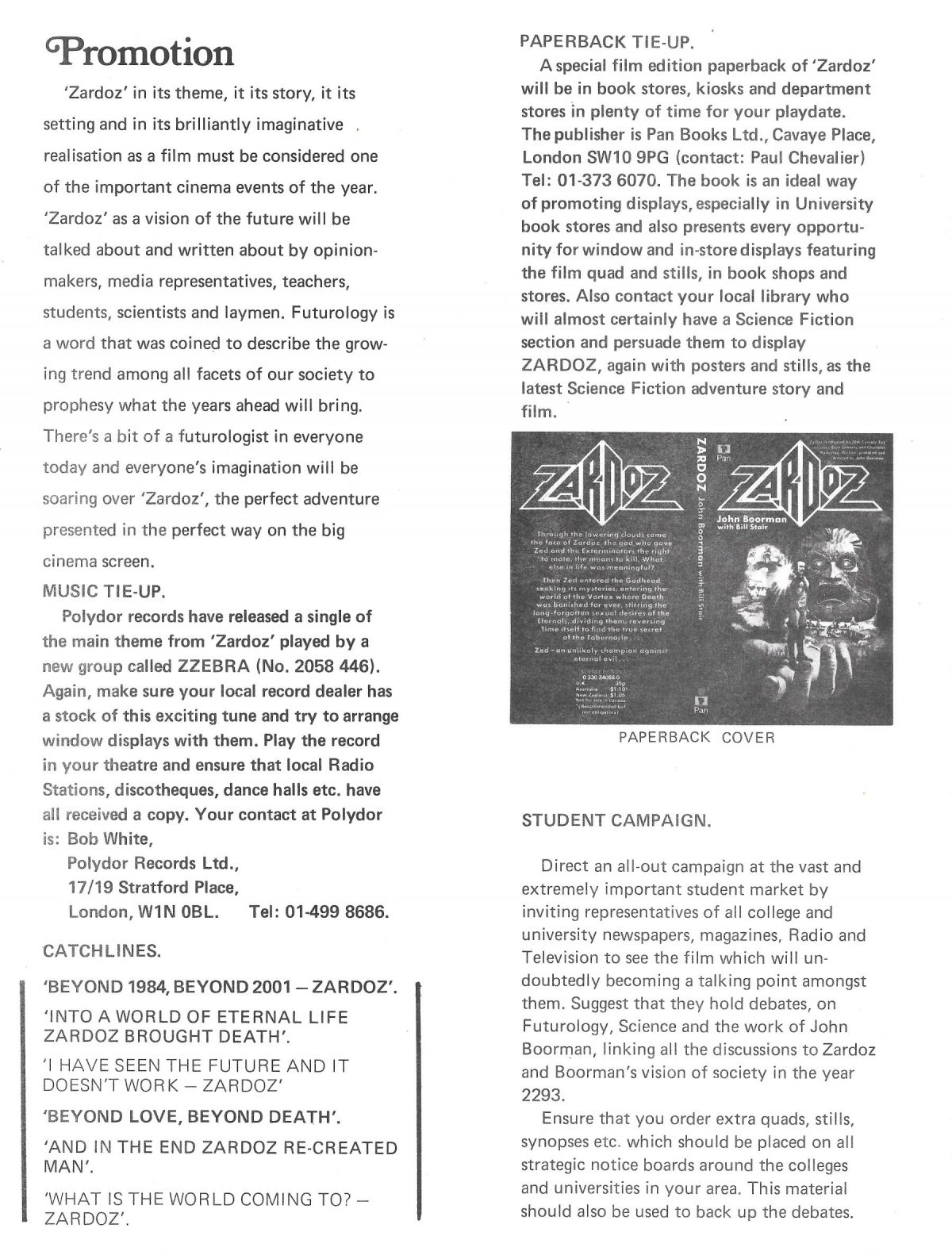 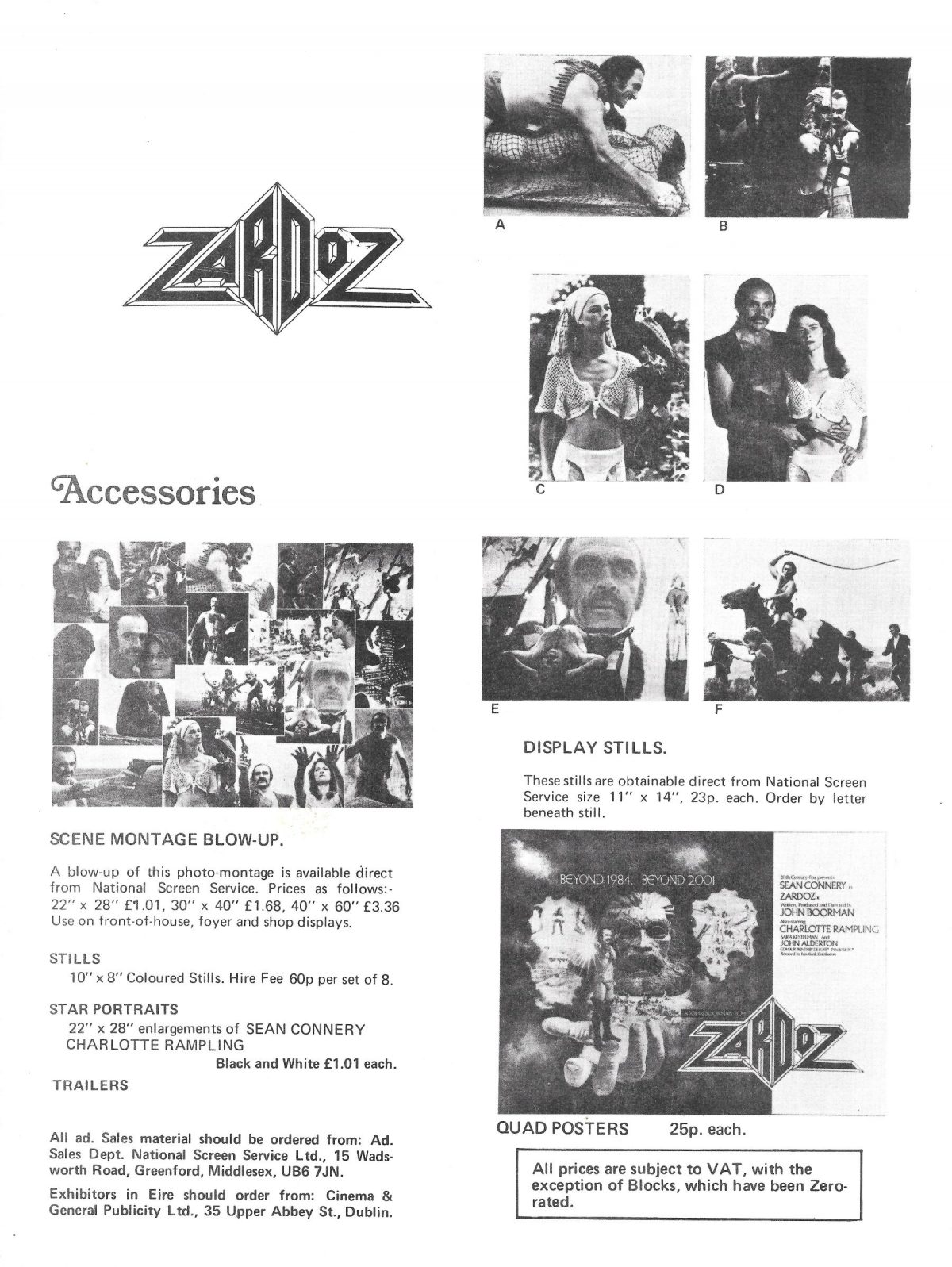 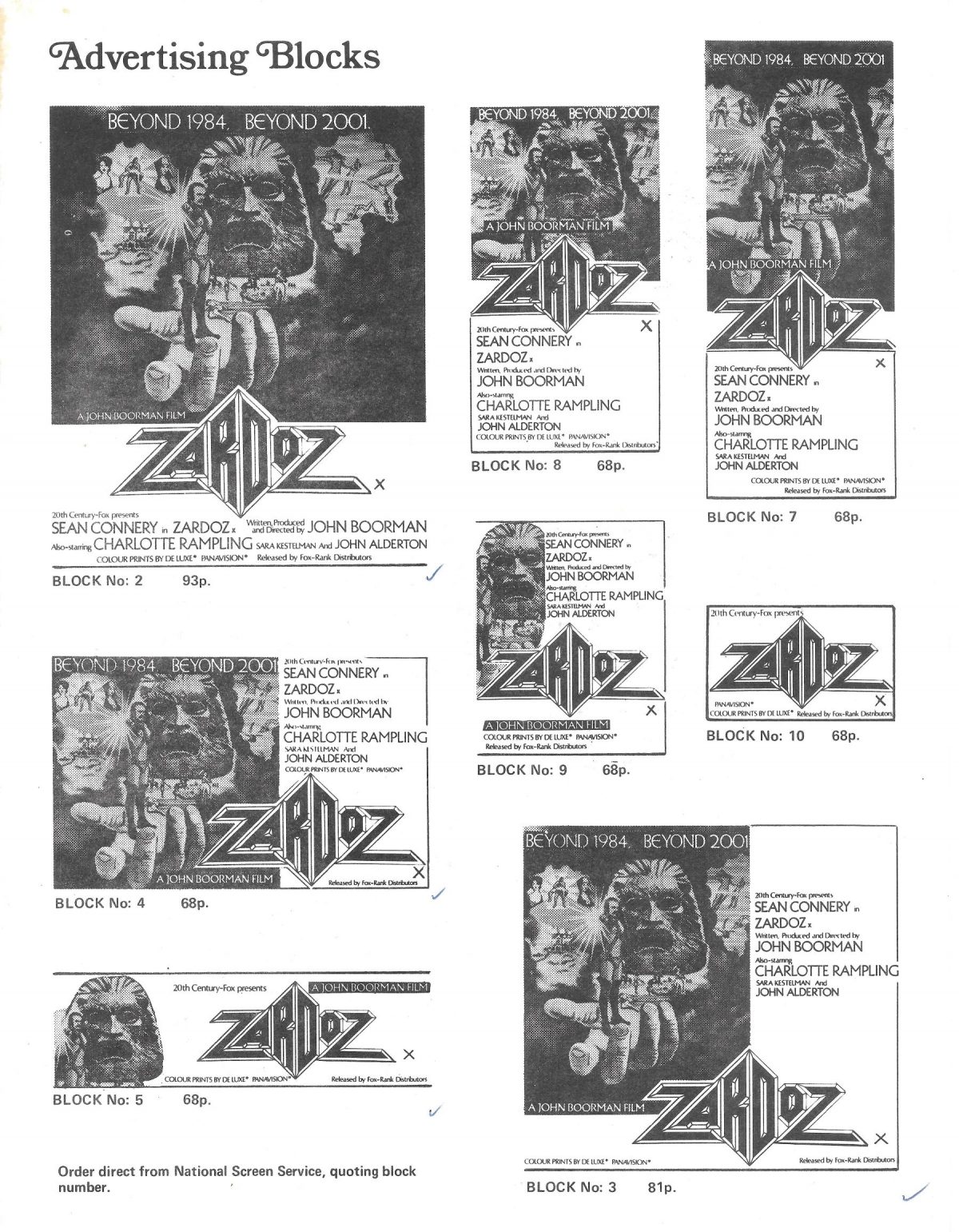 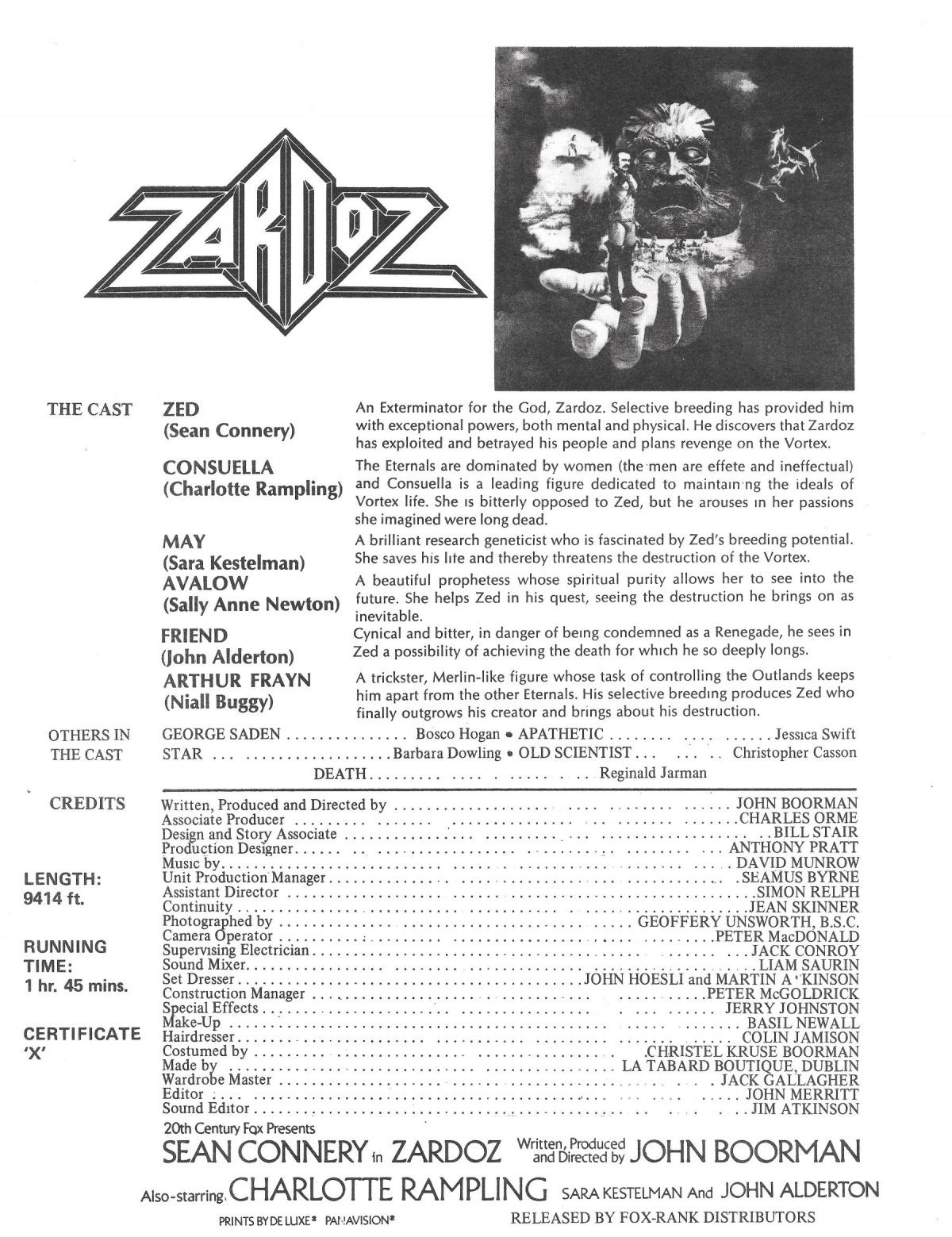 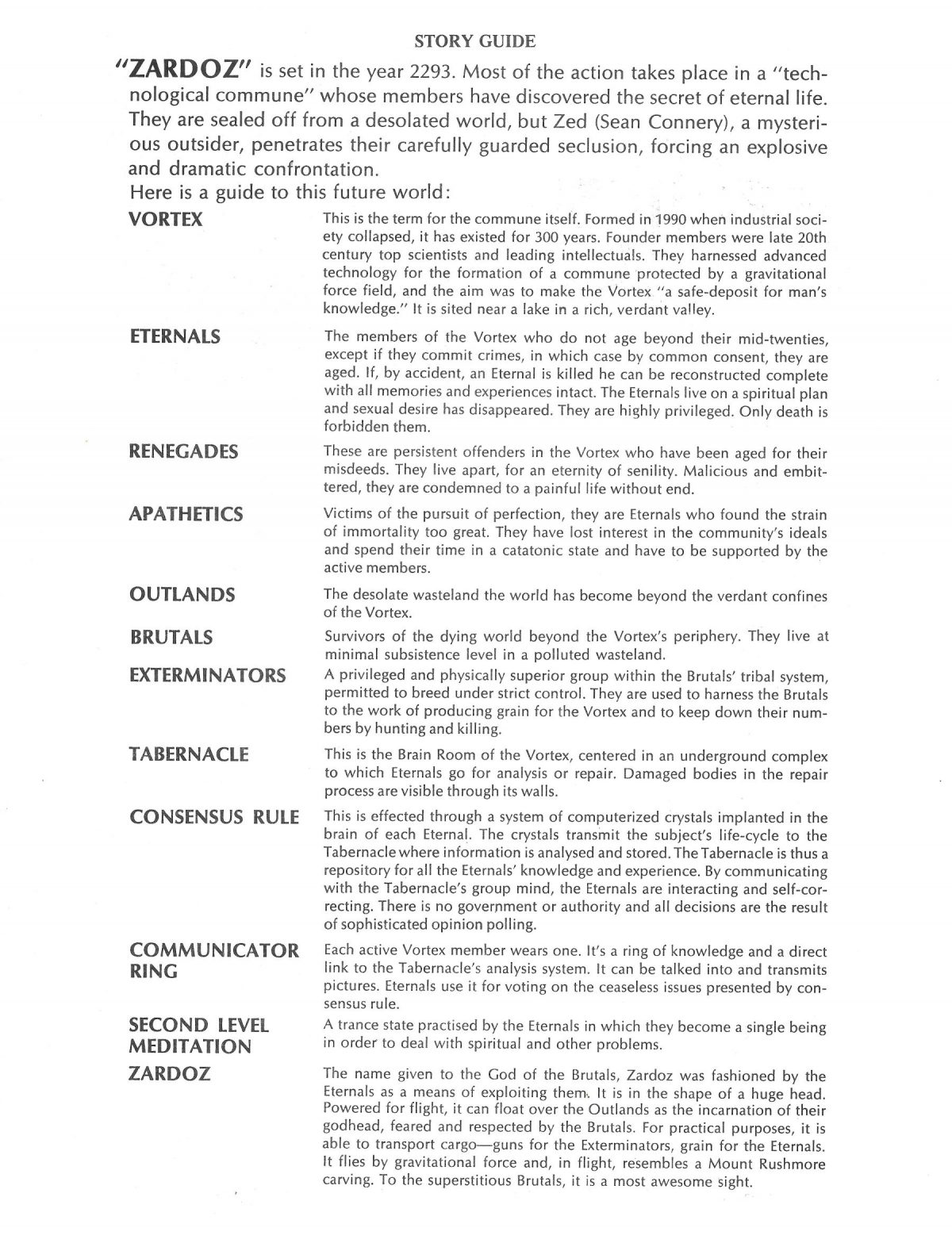 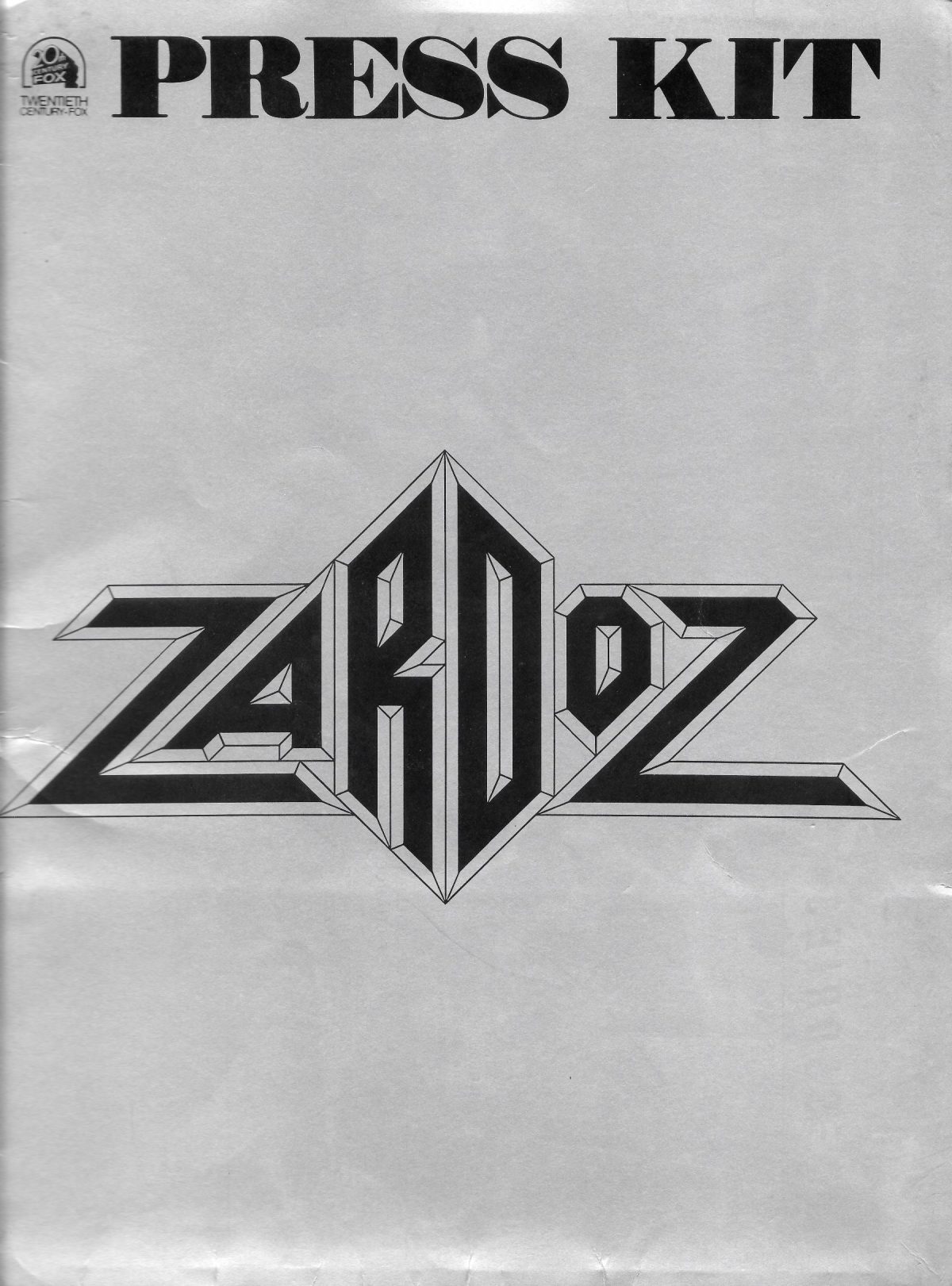 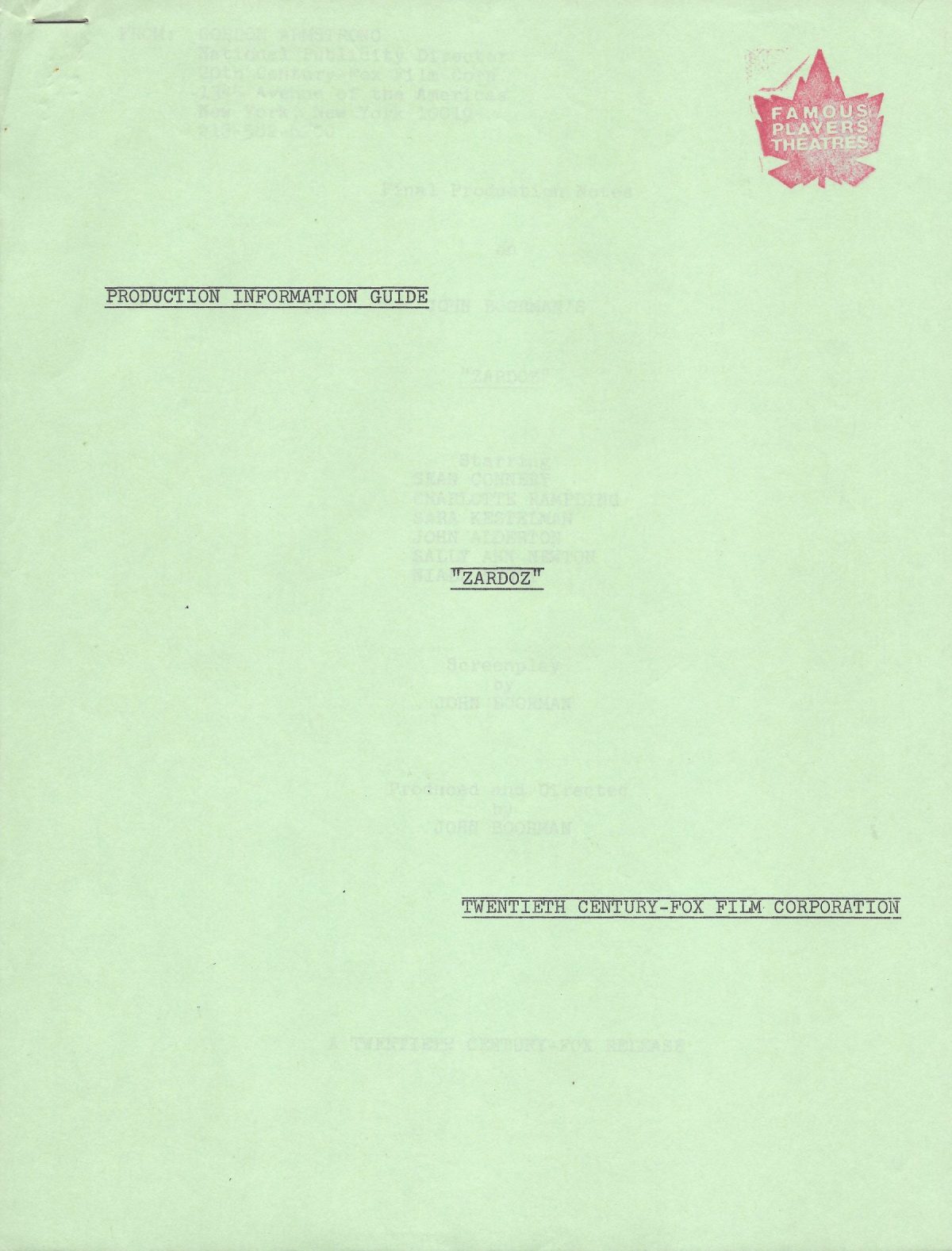 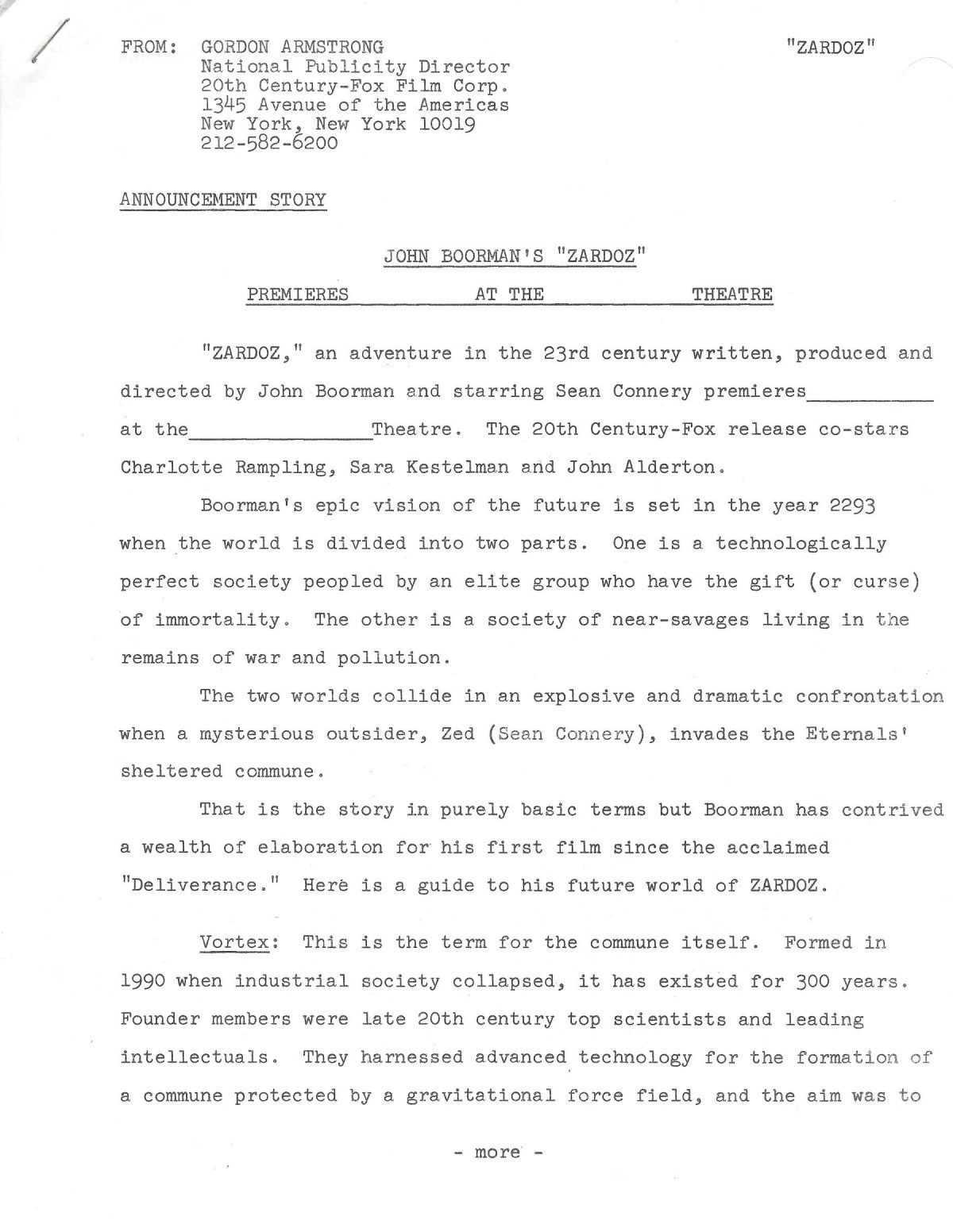 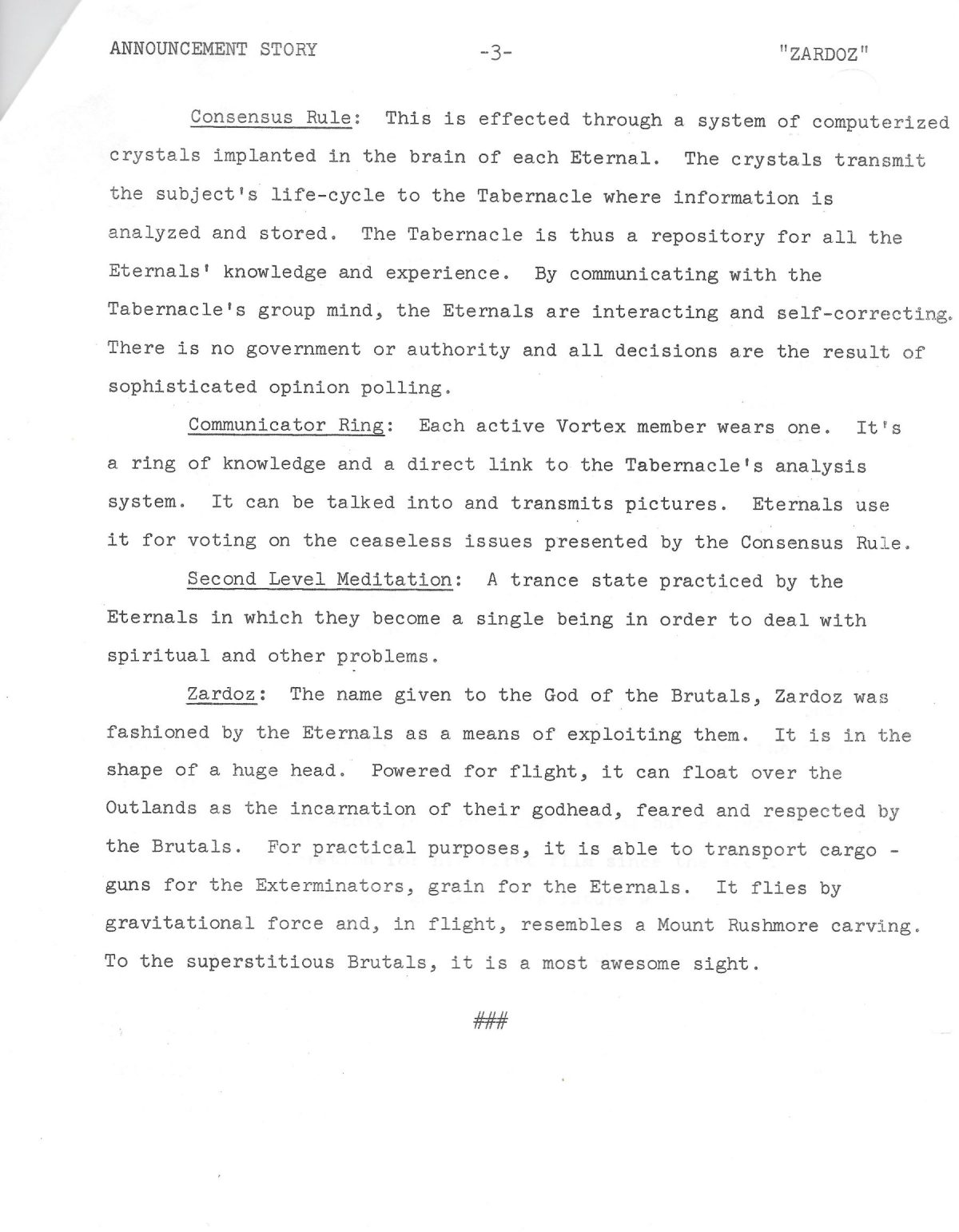 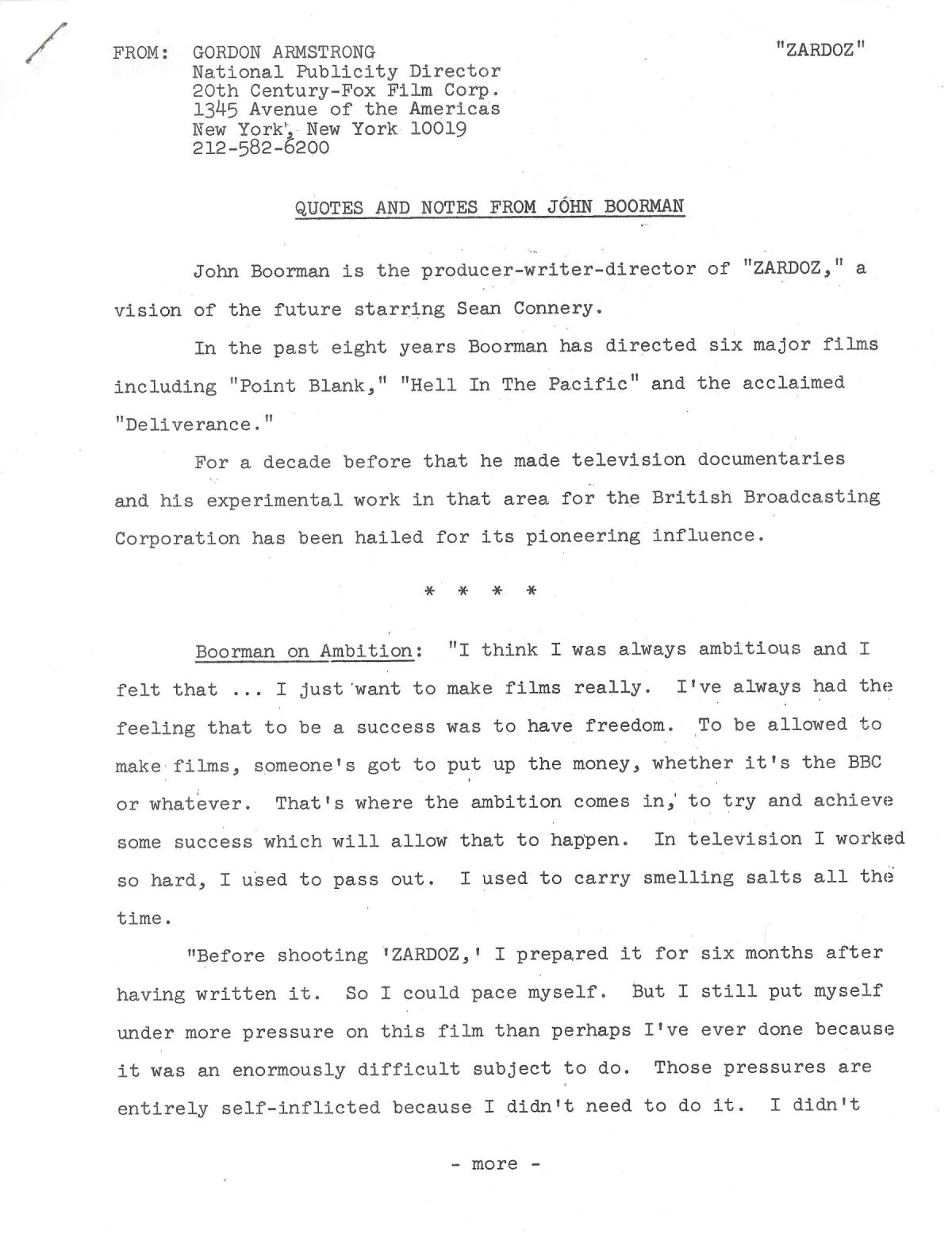 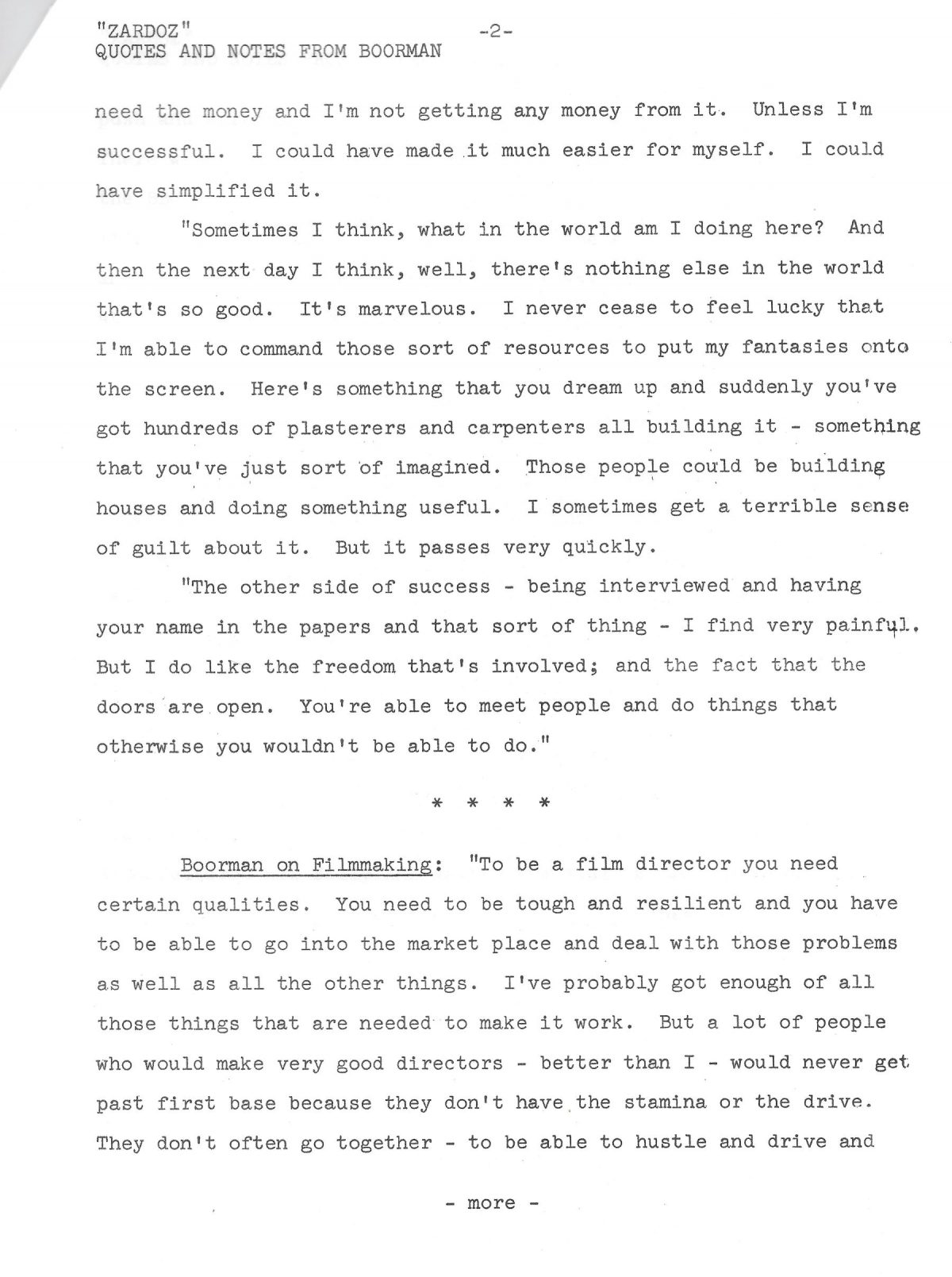 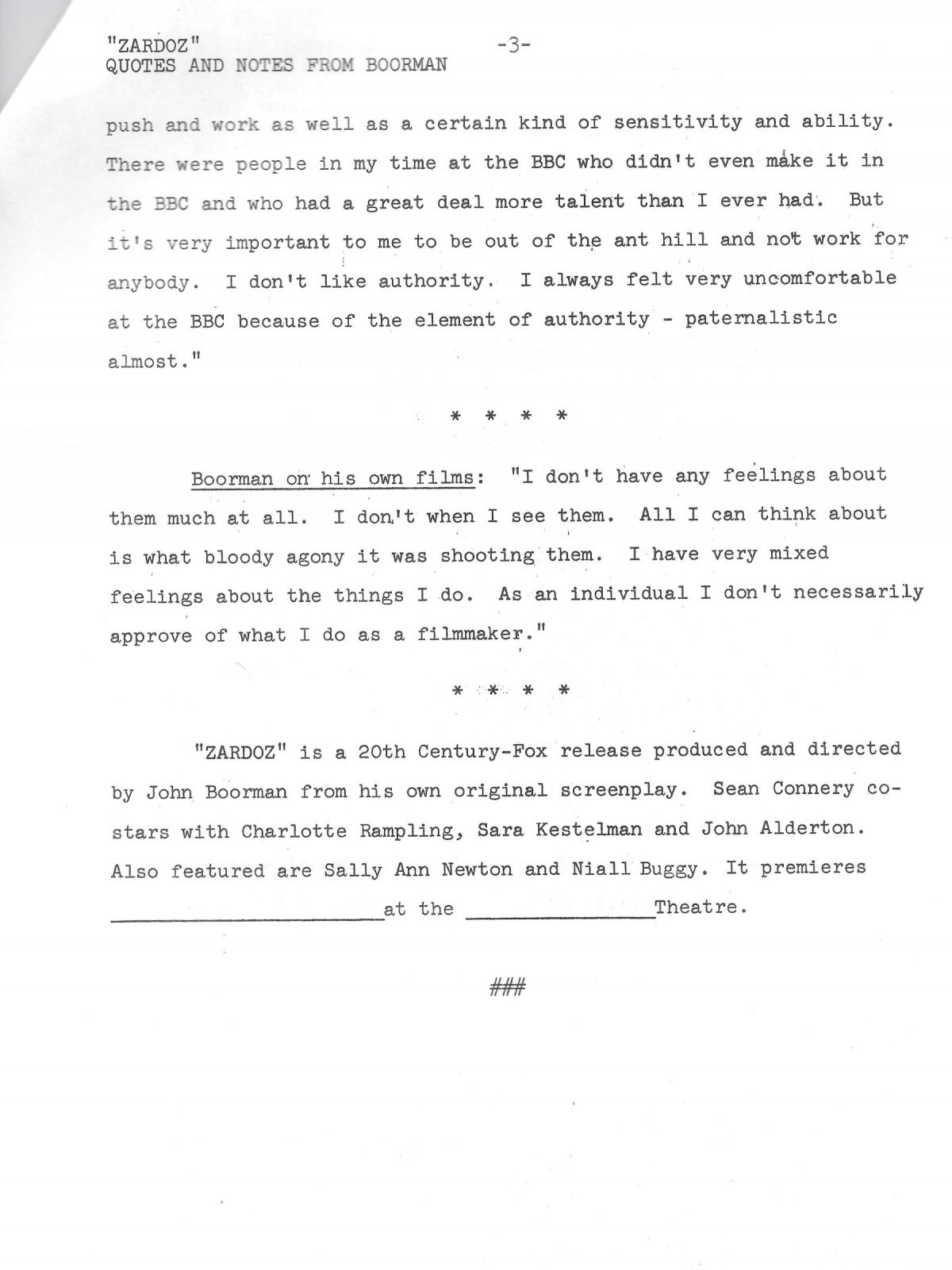 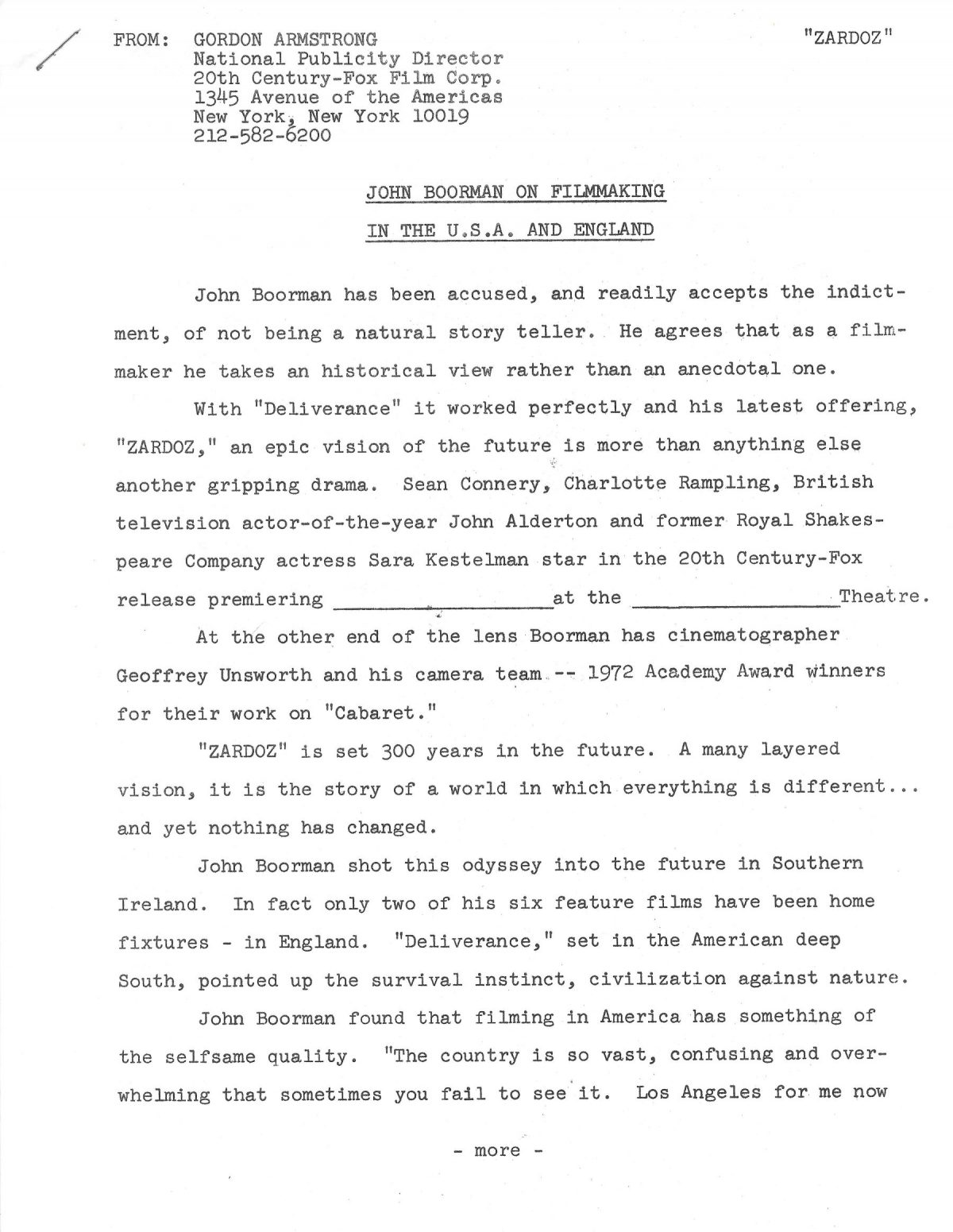 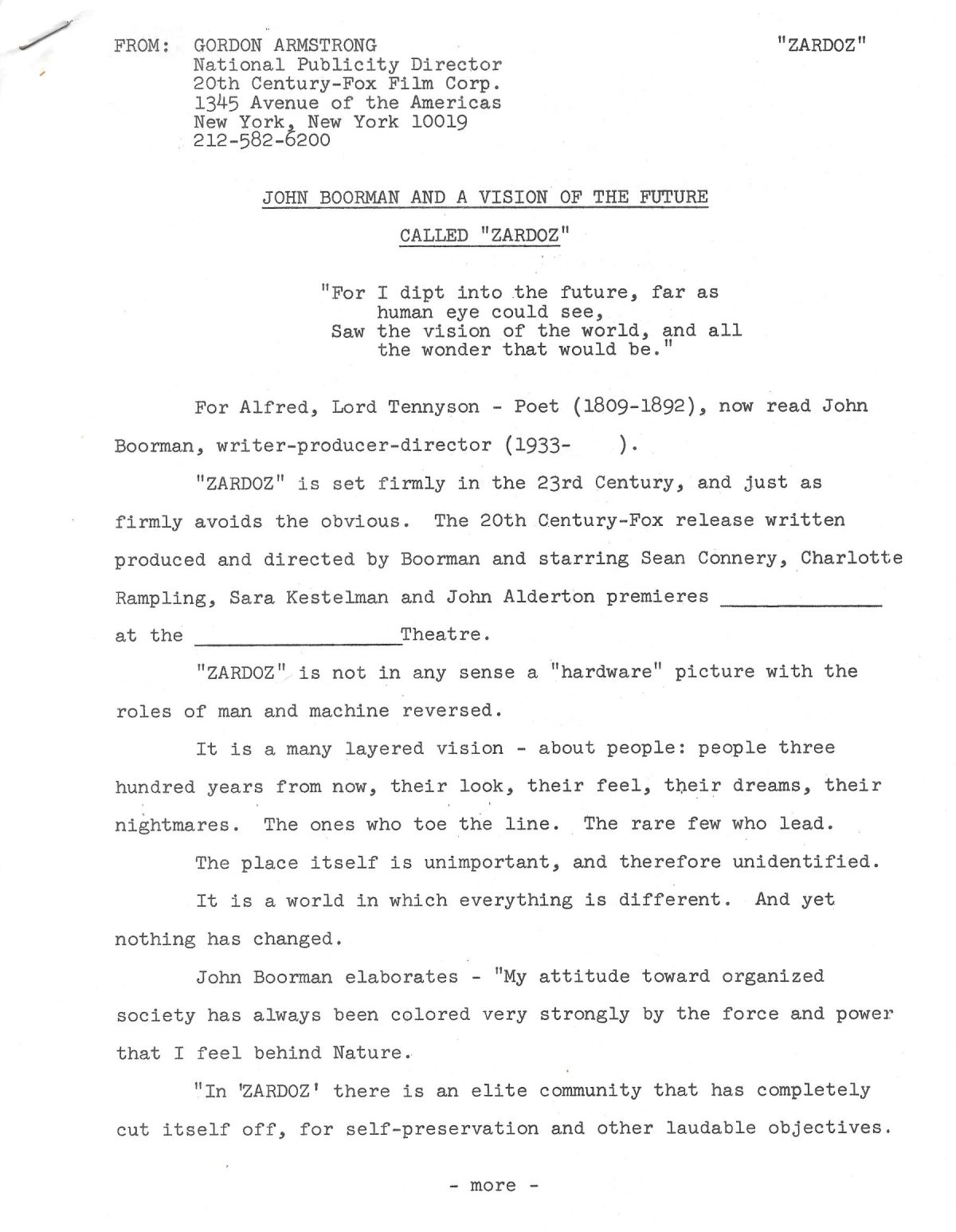 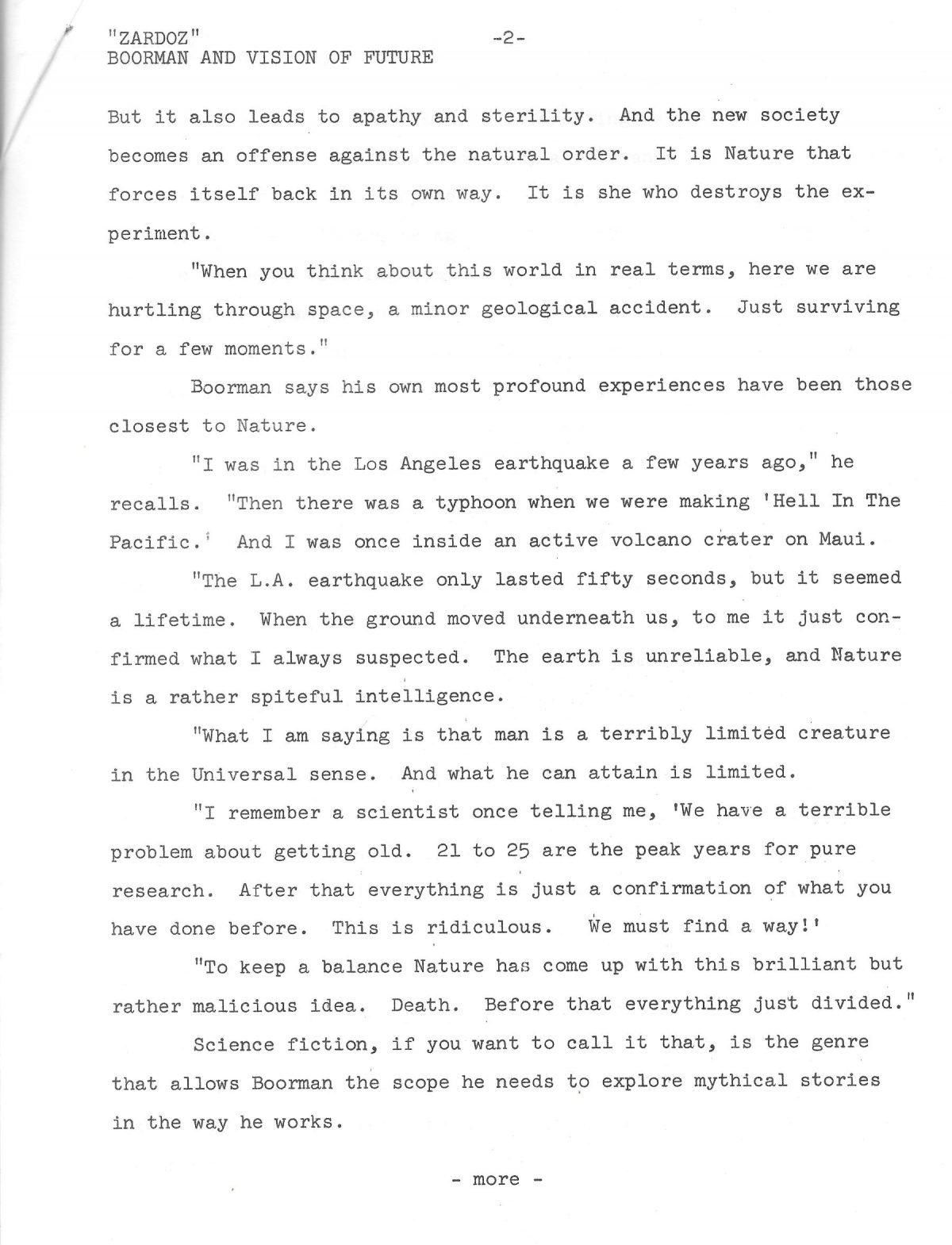 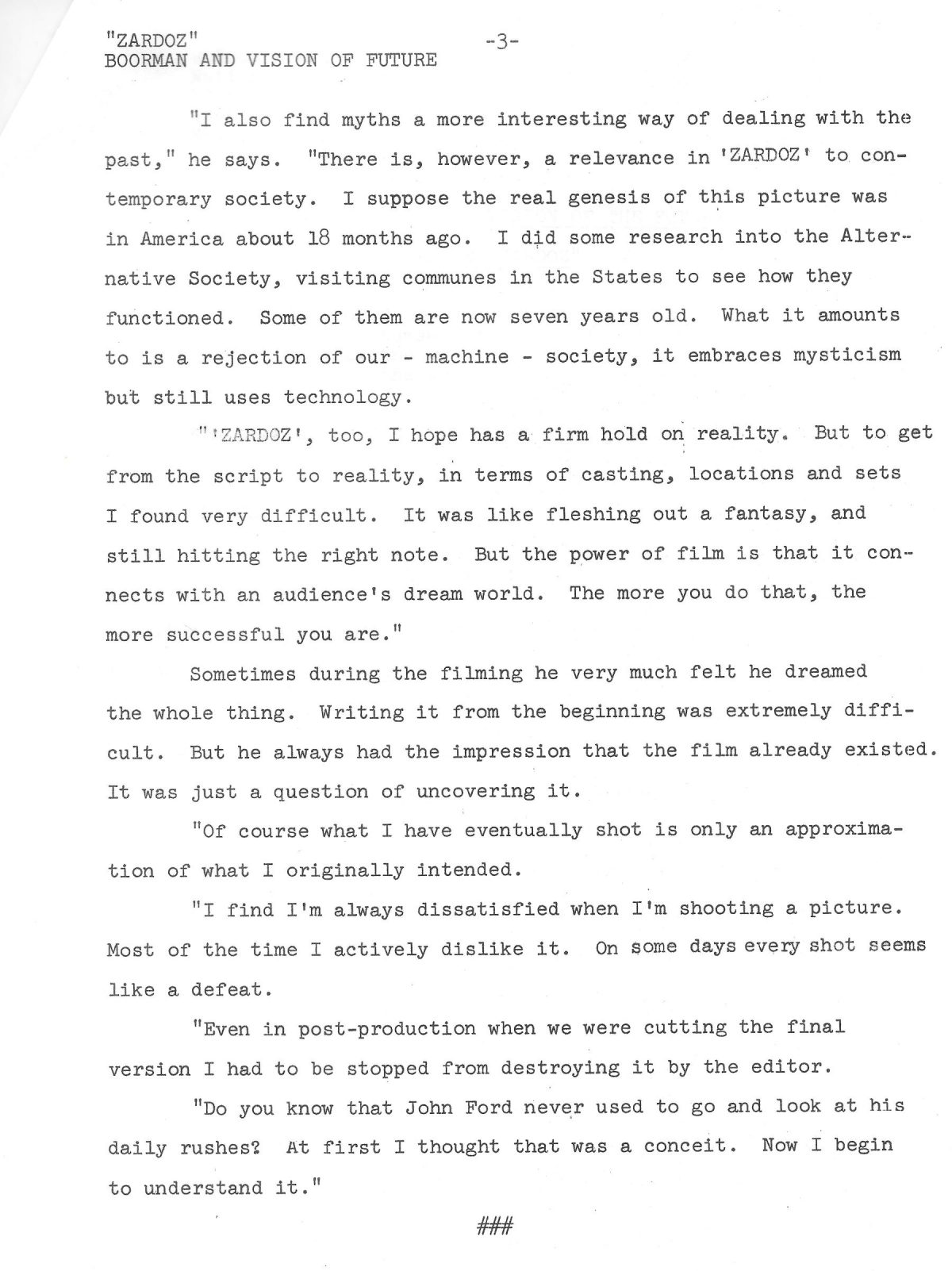 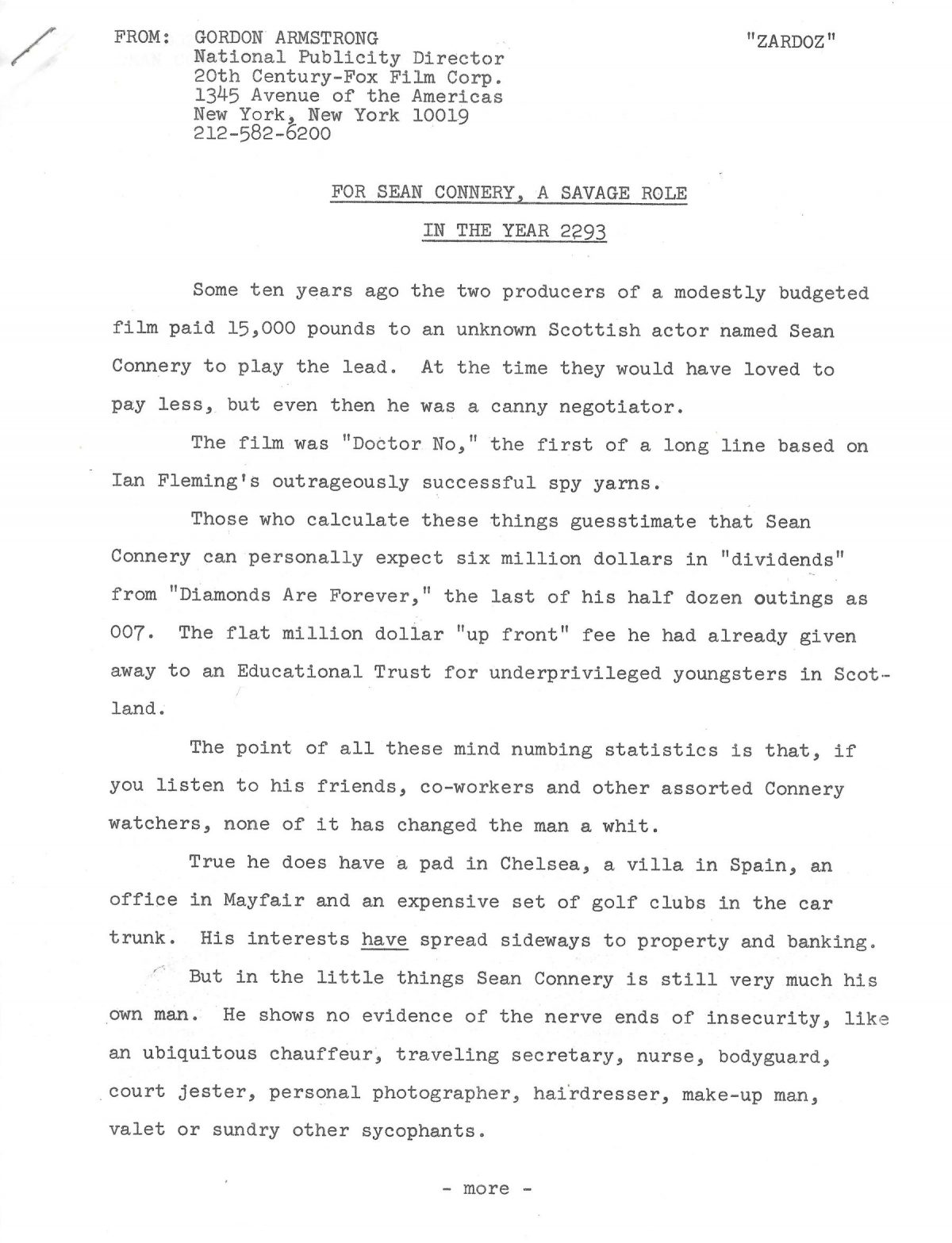