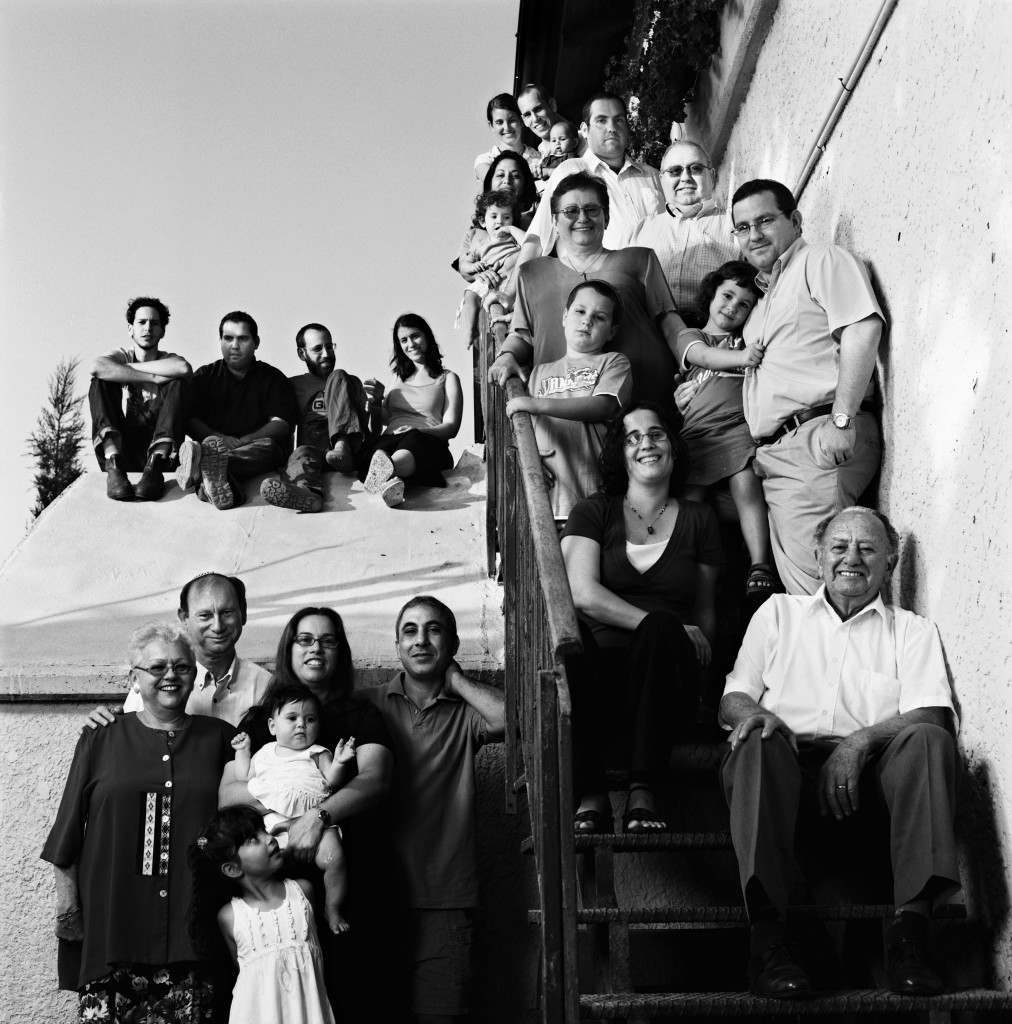 Holocaust Survivor Tzvi Kretz, bottom right, is seen outside his house with his family in Jerusalem in this photo taken September, 2007. Kretz was born in 1924 in what was then Czechoslovakia, where he survived the Chust Ghetto and in 1944 was transferred to Auschwitz-Birkenau where he was separated from his mother and three siblings. He never saw them again. Israel’s annual Holocaust Heroes and Martyrs Remembrance Day for 6 million Jews who were killed by German Nazis and their collaborators in World War II begins at sundown Wednesday April 30, 2008.(AP Photo/Oded Balilty)

12: Don’t be a bystander. They knew. They never did bomb the train tracks or the death factories.

Witold Pilecki (see photo above) risked much to tell the world of the slaughter of the Jews. In a story of depravity and death, Pilecki is a beacon of light. He did not stand and watch.

PN experts suspect that there are up to 100 bodies of executed victims in the pit. About 30 of them were allegedly German war criminals, shot to death in Warsaw’s Mokotów Prison between 1948 and 1956. But most of their fellow prisoners on death row were Poles who had revolted against the dictators installed by Stalin — and died as a result. Their wives and relatives often learned of the executions only months later, and they were never told where the bodies were buried.

Andrzej Pilecki, a spry 80-year-old man, has also come to the cemetery on this summer day. He is there to provide the IPN experts with material for a DNA test because they suspect that the body of his father, Witold, is also in the mass grave. “I would be happy if I could finally light a candle at this spot,” he says.

Witold Pilecki is a special case among all the heroes buried at Powazki Cemetery. A cavalry captain, he endured firsthand all the tortures his nation had experienced in the 20th century. He was a soldier in the Polish underground army during the German occupation and, as an agent for the movement, volunteered to be deported to Auschwitz so that he could gather intelligence on the Germans’ murderous activities there. But this didn’t protect him from being executed after the war for “espionage” against the new regime and probably being buried in this very pit where his son Andrzej is now standing…

In September 1940, Pilecki deliberately had himself arrested during a raid in the Warsaw district of Zoliborz and was taken to the concentration camp.

“I am expected to describe bare facts only,” he later wrote in his account of his time as prisoner No. 4859. “But we were not made of wood.” Poland’s government-in-exile would use the document, known as “Witold’s Report,” to help convince the Allies that the Holocaust was taking place.

He wanted them to bomb the death factory. But they didn’t. They never even bombed the train tracks delivered the doomed. Why? We can only guess.

“The story was remarkably detailed and accurate, yet the credit belongs neither to this newspaper nor the anonymous ‘Daily Telegraph reporter’ who was the author.

All the facts were supplied by Szmul Zygielbojm, a member of the Polish government in exile who made it his mission to inform the world about the holocaust.

After arriving in London in 1942, Zygielbojm used a clandestine network of contacts across occupied Poland to gather eyewitness accounts of the fate of Jews. The particular information in the Daily Telegraph’s story was smuggled to London on microfilm hidden inside a key”.

The Telegraph published the story on page 5 of a 6-page paper.  Zygielbojm wrote:

“Children in orphanages, pensioners in almshouses and the sick in hospitals have been shot. In many places Jews were deported to ‘unknown destinations’ and killed in neighbouring woods. In Vilna 50,000 Jews were murdered in November. The total number slaughtered in this district and around Lithuanian Kovno is 300,000”. 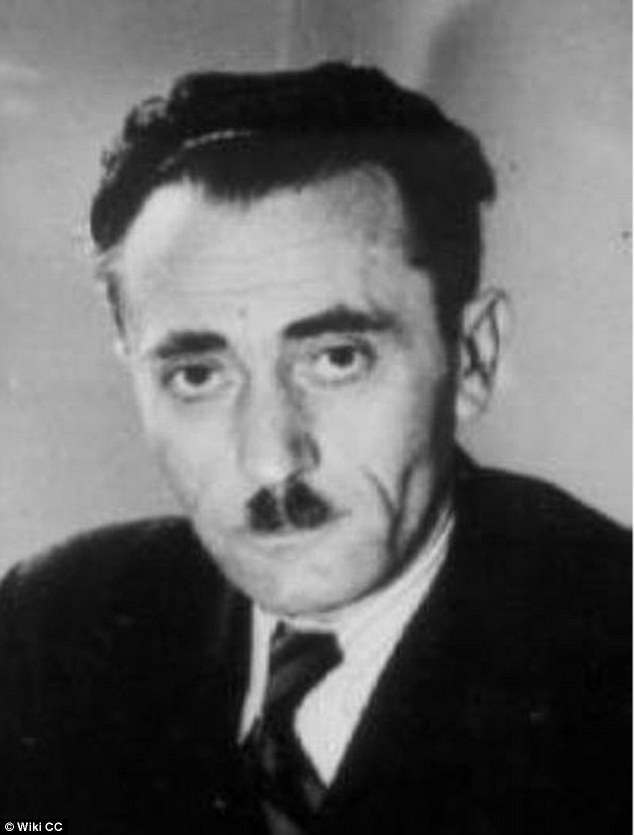 When The Telegraph’s story appeared, Zygielbojm’s wife, Manya, and their son, Tuvia, were still living in occupied Poland as prisoners in the Warsaw Ghetto. Both died during the razing of the Ghetto in 1943.
Crushed by this tragedy – and by the weight of indifference towards the fate of the Jews – Zygielbojm took his own life on May 11, 1943.

“The responsibility for the crime of the murder of the whole Jewish nationality in Poland rests first of all on those who are carrying it out,” he wrote. “But indirectly it falls also upon the whole of humanity, on the peoples of the Allied nations and on their governments, who up to this day have not taken any real steps to halt this crime. By looking on passively upon this murder of defenceless millions tortured children, women and men they have become partners to the responsibility.”

Well, no-one had come to rescue the Jews from the ghettoes. So. Why come now? 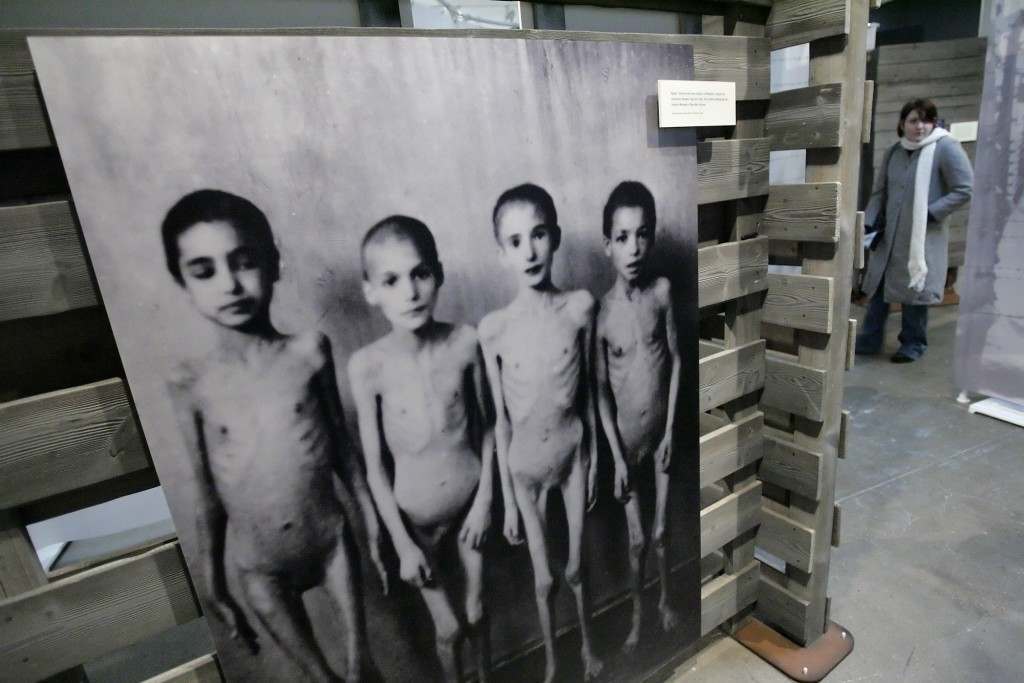 Mary Kuczan, of Pittsburgh, walks through the “Deadly Medicine: Creating The Master Race” exhibit Feb. 27, 2007 at the Andy Warhol Museum in Pittsburgh. The exhibit uses 200 photographs, videotaped survivor stories and several dozen artifacts to trace eugenics’ development from a perversion of Charles Darwin’s theory of evolution to its Nazi justification for genocide. The foreground photograph shows a group of Gypsy children who were subjects of Dr. Josef Mengele’s research at Auschwitz between 1943 and 1945.(AP Photo/Gene J. Puskar) 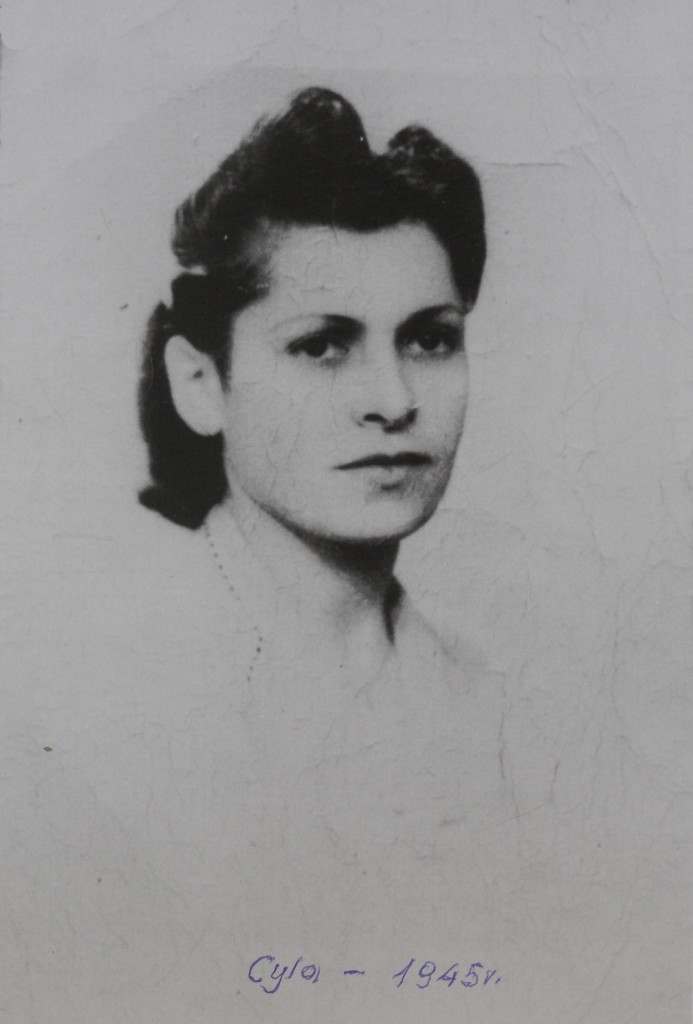 In this 1945 photo Cyla Cybulska is seen. 60 years ago Cyla escaped from the Auschwitz Birkenau death camp with the help of her Polish boyfriend Jerzy Bielecki, also an Auschwitz prisoner (AP Photo/Bielecki Family Archive) 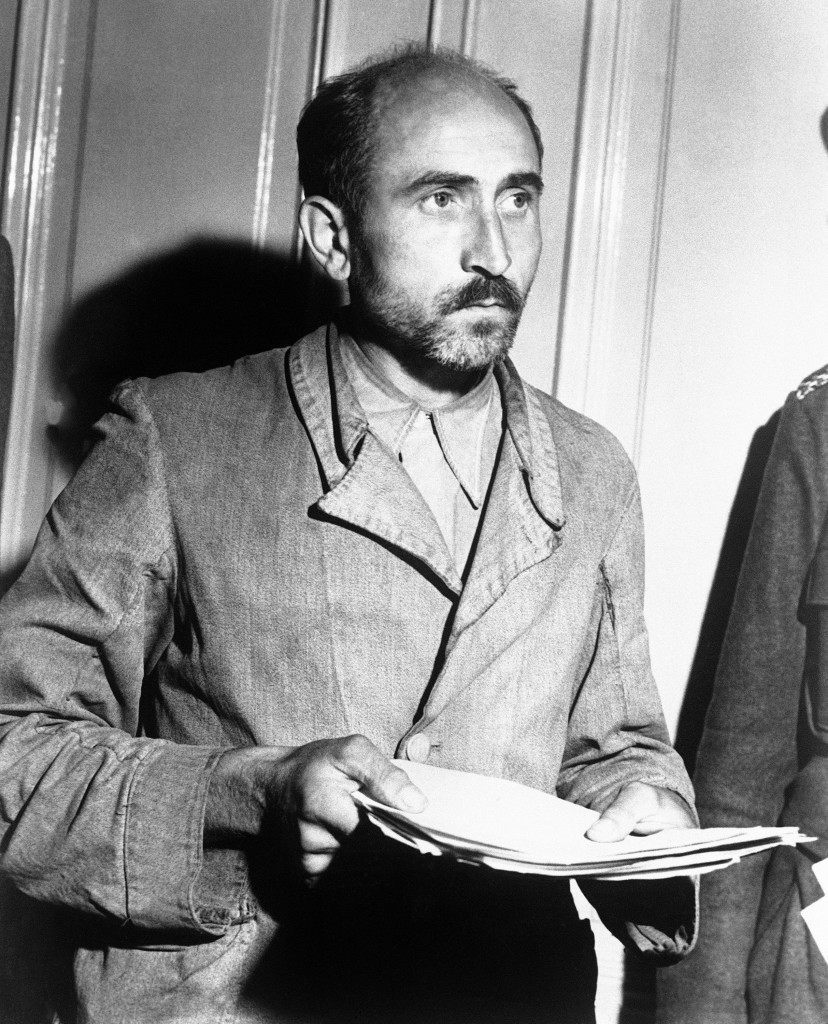 Ernest Gradner, former commander of the Auschwitz Political Prison Camps is being held in Vienna on Aug. 28, 1945, pending his trial on a war crimes charge. He was captured on a farm fifty miles from Vienna, where he had been working. (AP Photo) 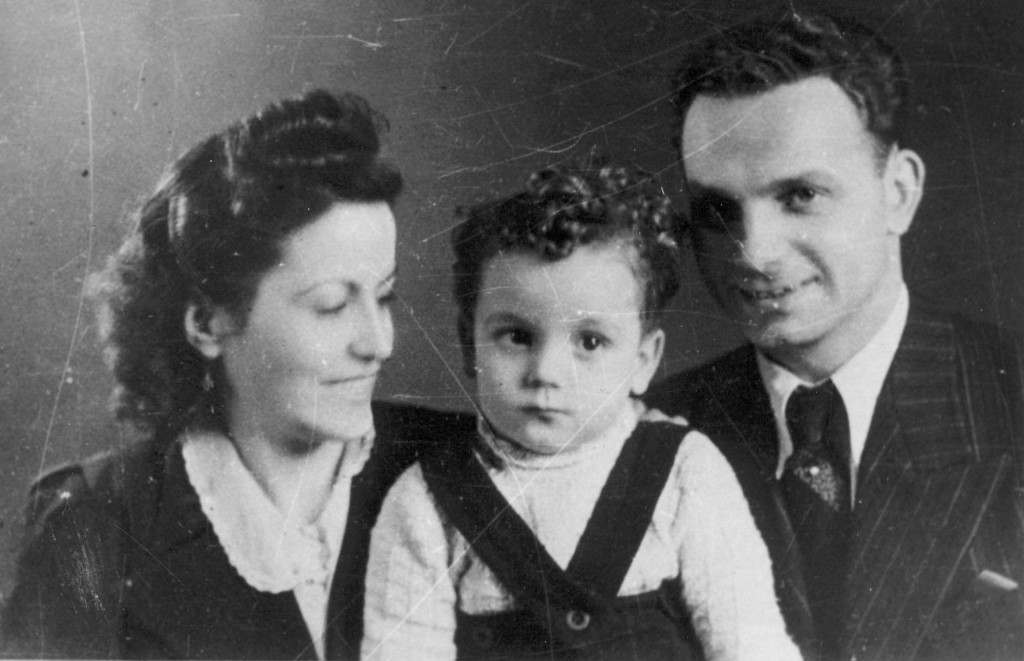 This undated photo taken by Wilhelm Brasse and released by the Auschwitz Museum, shows SS officer Fremel Rudolf with his wife, and son. 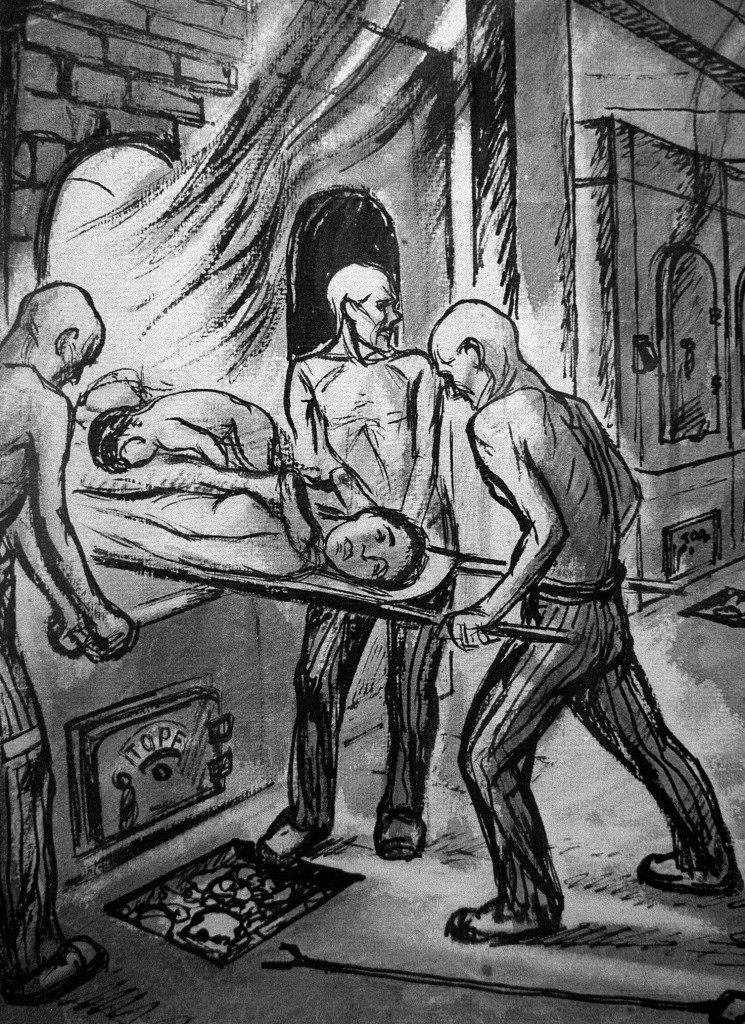 Jewish prisoners insert the bodies of fellow Jews into a furnace in Auschwitz in an ink drawing by Holocaust survivor and artist David Olere. This is one of about 40 ink drawings by the French artist who survived the Sonderkommando, the unit of Jewish prisoners forced to work in the death camp s crematoria. On display at the Yad Vashem Holocaust Memorial in Jerusalem, Olere s pictures are the world s only visual record of the inner workings of the Nazi s factory-like killing machine at Auschwitz. (APPhoto) 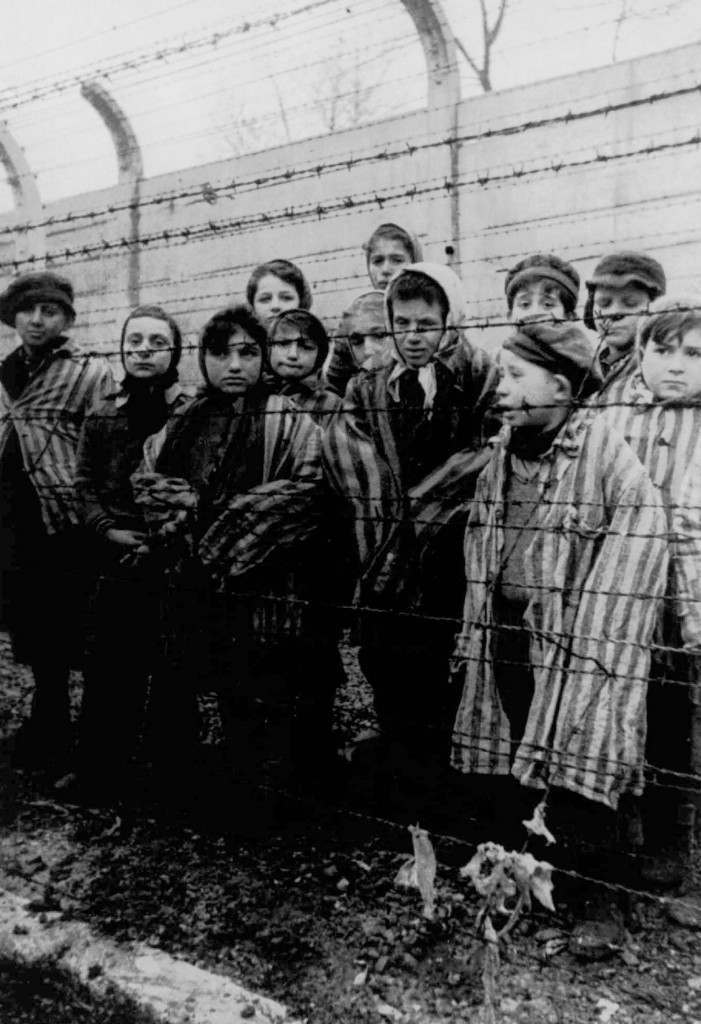 Pasa Balter, fourth from left, stands among a group of children wearing concentration camp uniforms behind barbed wire fencing as they were liberated from the Nazi concentration camp at Auschwitz, Poland by Russian soldiers in April, 1945. Balter, who is now known as Paula Lebovics, is 61 and living in Encino, Calif., a survivor who bears the heartbreak of having lost most of her family. (AP Photo/ho)
Ref #: PA.4763052 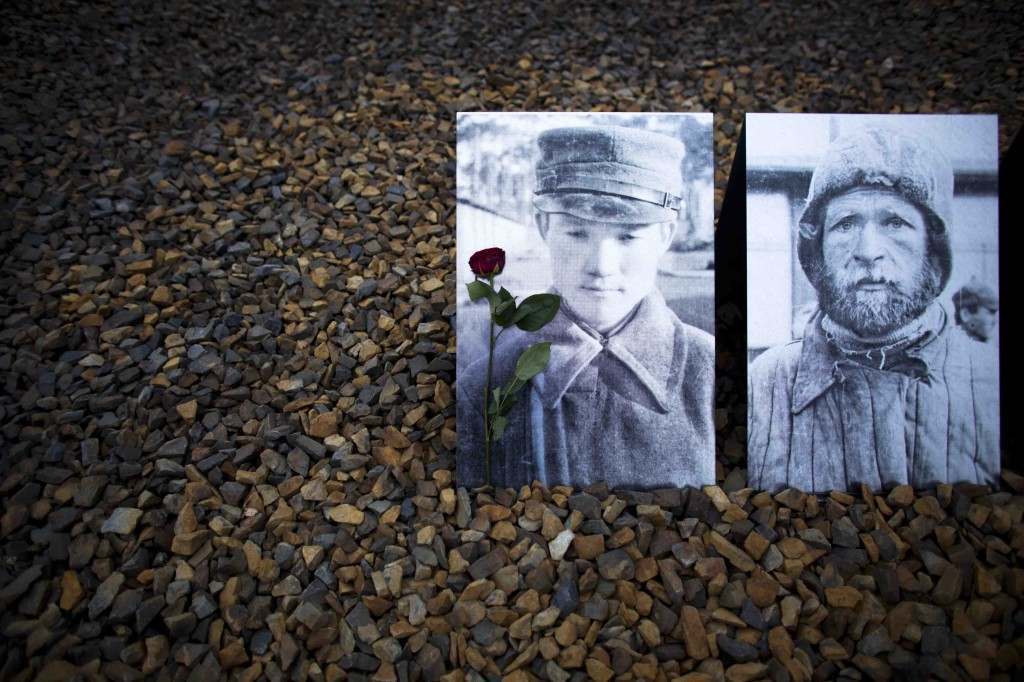 A flower lays in front of portraits of Soviet soldiers at a remembrance site at the Sachsenhausen Nazi death camp on the international Holocaust remembrance day in Oranienburg, Germany, Friday, Jan. 27, 2012. The portraits show Red Army prisoners of war as they arrive at the Sachsenhausen camp. They stand on a stone field marking a barrack that hosted a so called ‘neck-shot facility’. More than 10,000 Soviet prisoners of war were killed in this barrack in 1941. The Holocaust remembrance day marks the day of the liberation of the Auschwitz-Birkenau death camp 67-years ago. (AP Photo/Markus Schreiber) 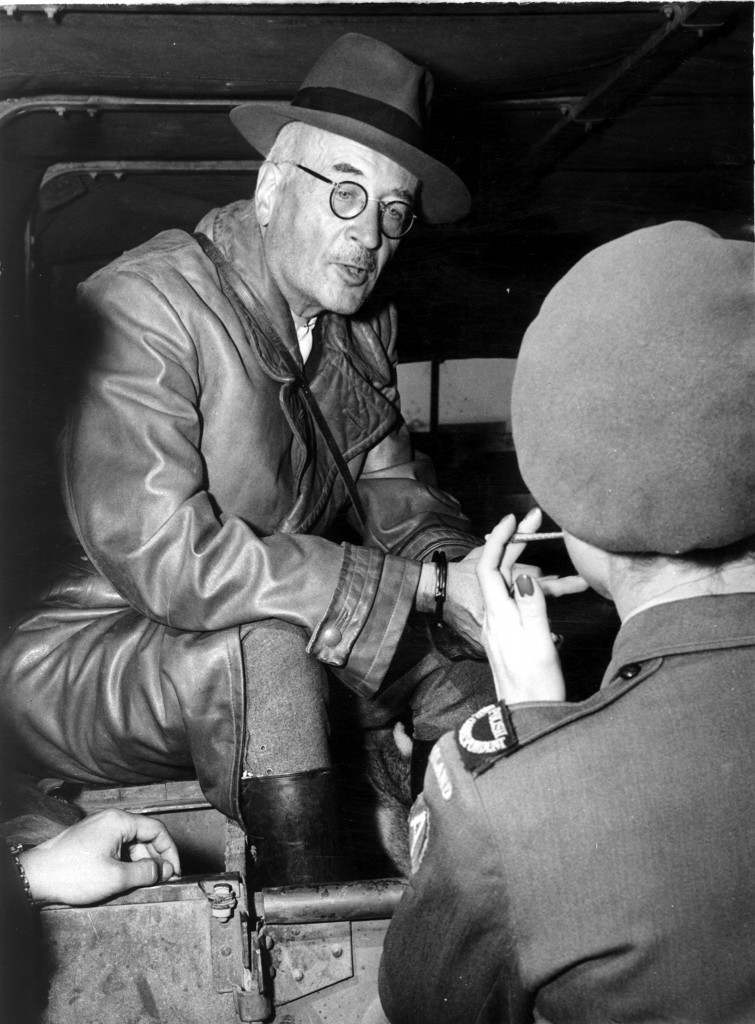 Dr. Kurt von Burgdorff, the former governor of Krakow in Poland, in handcuffs, at Fuerth Airport after before transportation to Warsaw. Burgdorff and the Governor of Auschwitz Extermination Camp, Rudolf Hoess, having finished giving evidence to the International Military Tribunal in Nuremburg, were transported to Poland to face charges including genocide at the Polish Tribunals.
Ref #: PA.8697322 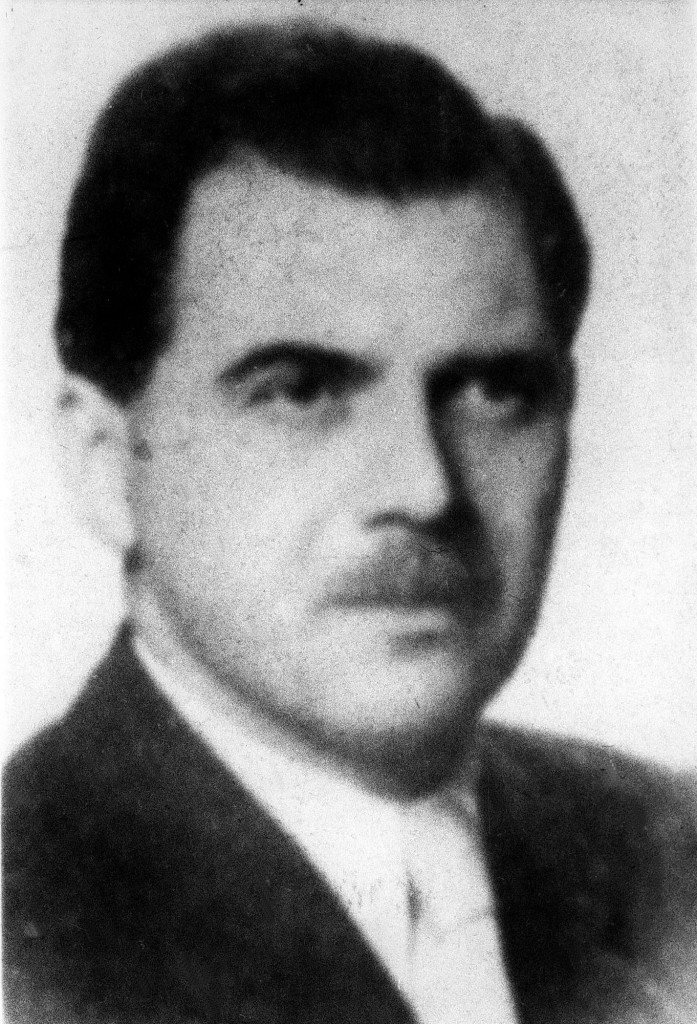 This picture of 1956 shows the World War II criminal Josef Mengele. According to West German prosecutor Hans Eberhard Klein, who heads the search for the chief doctor of the Auschwitz death camp, it is the last real picture of Mengele. The photo was used by Mengele when he applied for an identity card in Argentina in 1956 under his real name. (AP-Photo) 1956 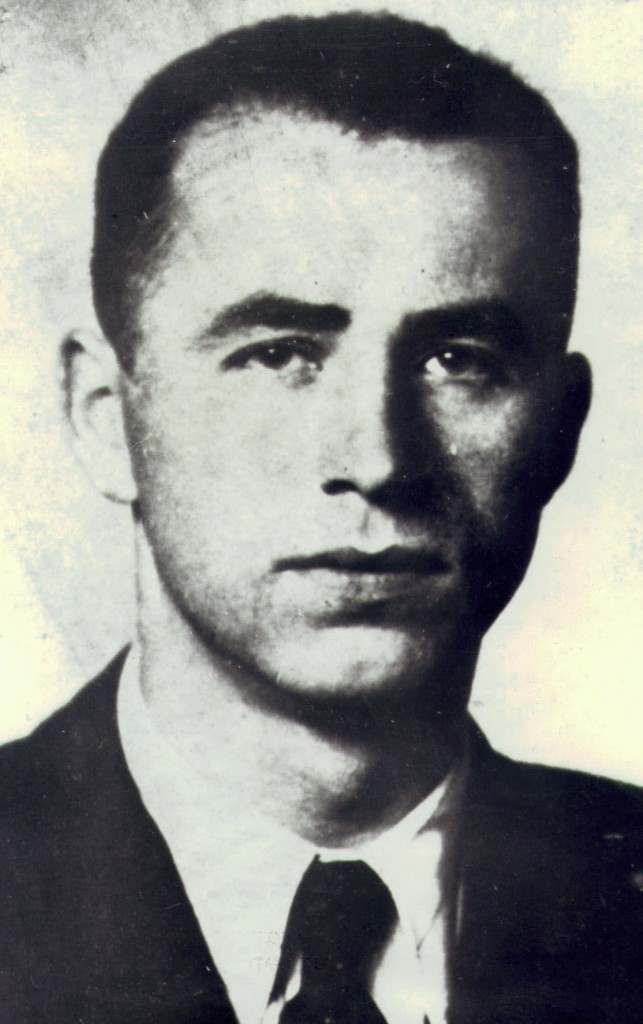 Undated picture of Austrian-born Alois Brunner, one of the world’s most-wanted Nazi war criminals. Brunner will be tried in a Paris court Friday March 2, 2001 for his crime. Brunner, who was sent to France in 1943, took command of the Drancy transit camp, north of Paris, where Jews were held and stripped of their assets before being sent to the concentration camp at Auschwitz. 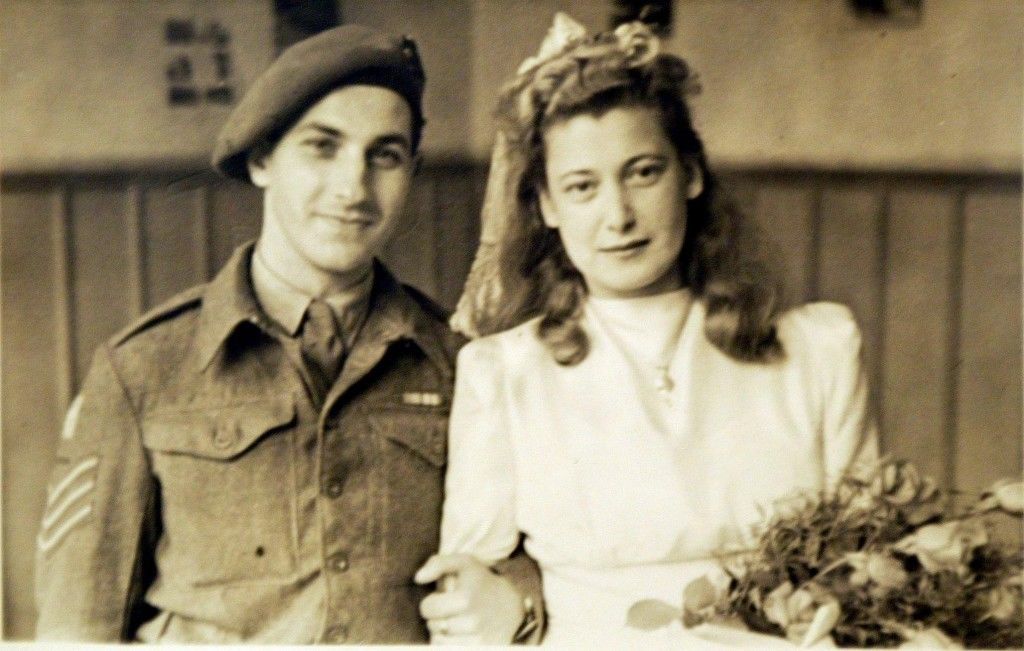 Family handout photo of dated 7th October 1947 of Norman and Gena Turgel on their wedding day in Germany. Gena Turgel entered the gas chamber at Auschwitz and lived to tell the tale. In the winter of 1944, the 21-year-old was made to strip naked with her mother inside the concentration camp’s extermination block and wait, but miraculously the deadly poison was never released. However the 81-year-old found something in the death camps that she never expected – love, in the form of her husband Norman. A Jewish soldier with the British Intelligence Corps, Norman Turgel was one of the first liberators to enter Belsen on April 15, 1945 and was charged with rounding up the SS commanders. Gena, whose surname then was Goldfinger, was imprisoned in the camp after being sent there from Auschwitz.
Ref #: PA.2230370 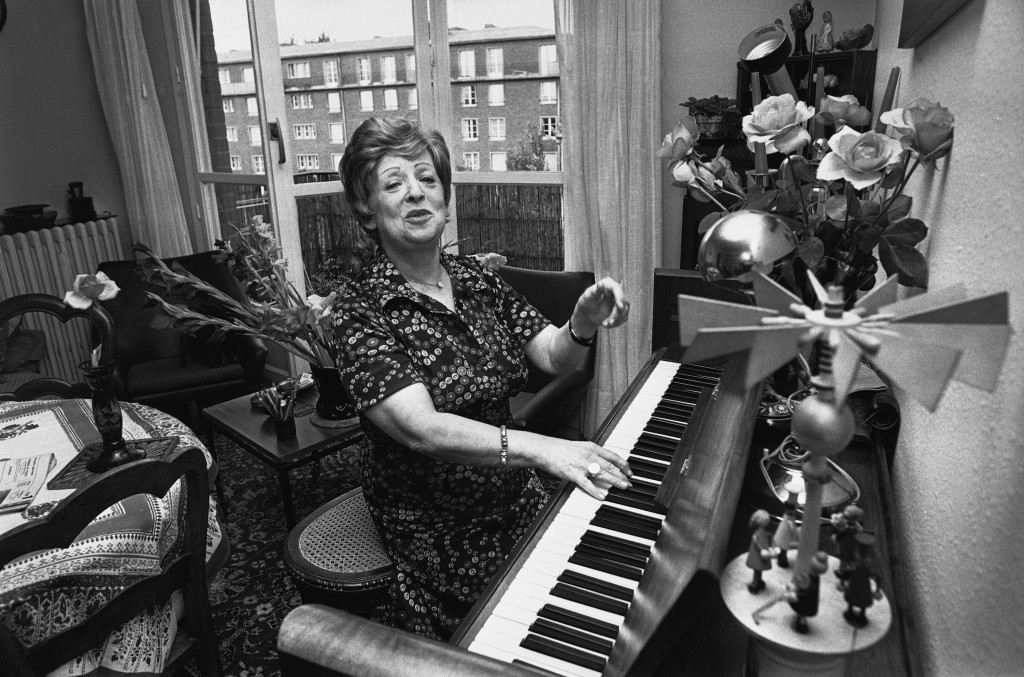 Musician and holocaust survivor, Fania Fenelon at her piano in her Paris apartment. She was forced to play in the infamous Women’s Orchestra of Auschwitz during the war.
Ref #: PA.9306418
Date: 10/08/1979 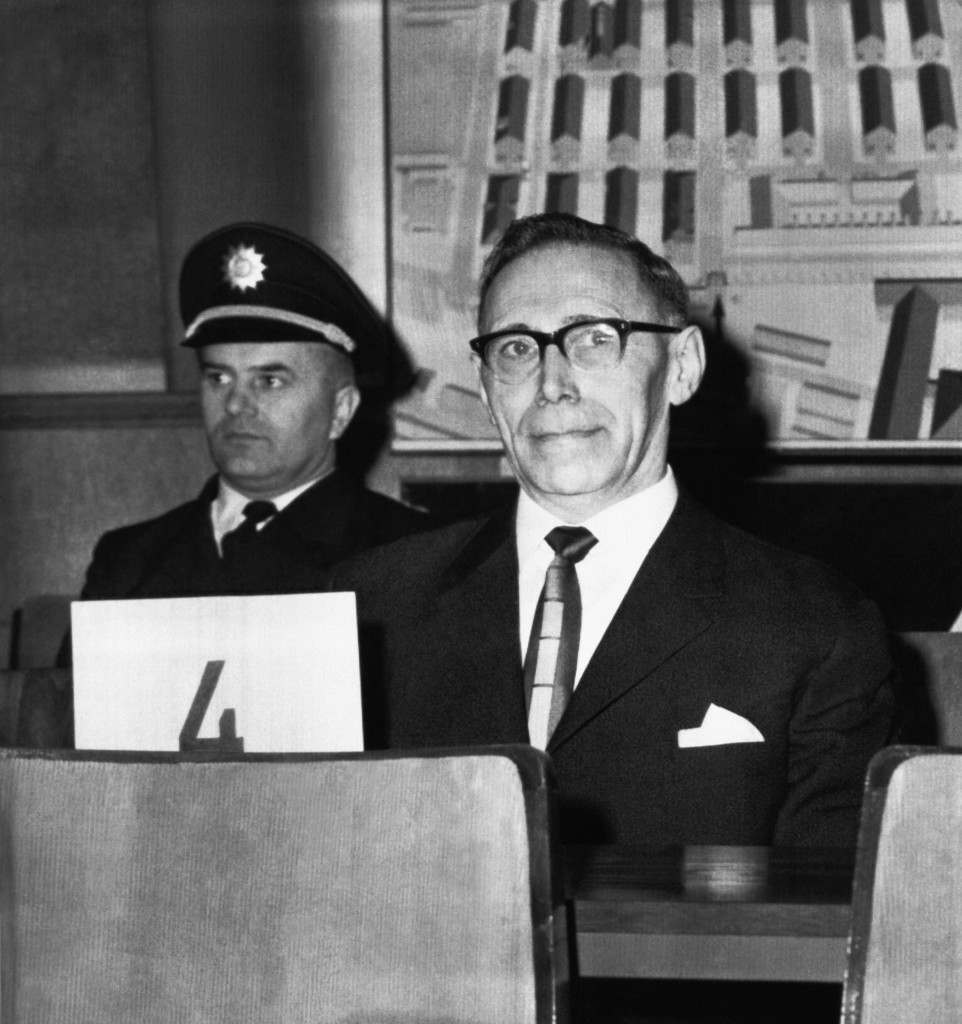 Auschwitz Concentration Camp SS-guard Wilhelm Boger, 56, pictured in Frankfurt on April 3, 1964, where he is on trial for war crimes. Witness Mximillian Sternol, 70, testified that Boger, named by his former prisoners Âthe devil of AuschwitzÂ, supervised the slaughter of 2,349 Jewish men, women and children who composed a special section of Auschwitz reserved for families, and the liquidation of thousands of the camps gypsies in the summer of 1944. Asked by the prosecution how he knew that exactly 2,439 Jews were killed in one action alone, Sternol answered: ÂIÂll never forget that number for as long as I live, because Boger made me count each and every one of his candidates as they were loaded onto the trucks that took them to the gas chambers.” (AP Photo)

This is a prisoner identity photo provided by the Auschwitz Museum, taken by Wilhelm Brasse while working in the photography department at Auschwitz, the Nazi-run death camp where some 1.5 million people, most of them Jewish, died during World War II. The Nazis sent Brasse to the camp as a Polish political prisoner in 1940, where he estimates that he took some 40,000 to 50,000 such identity pictures for the Nazis. (AP Photo/Auschwitz Museum)
Ref #: PA.2966321