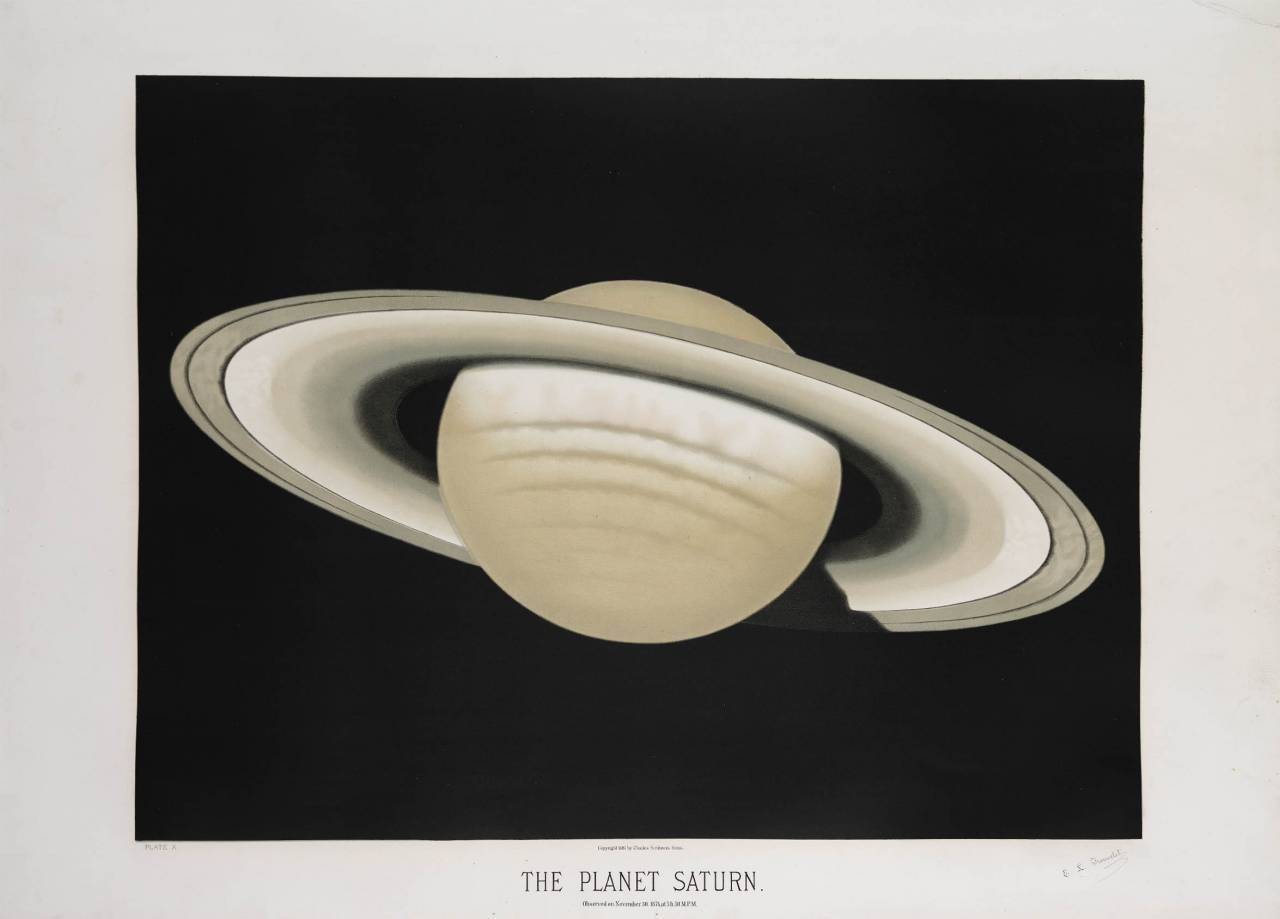 Étienne Léopold Trouvelot’s pencil and pastel drawings of celestial objects and phenomena were good enough to attract the admiration of the Harvard Observatory, which offered him a job in 1872. He accepted. Thanks to Trouvelot we get to see, in his words, “the celestial phenomena as they appear to a trained eye and to an experienced draughtsman.” People rocked up to see them when the 1878 World’s Fair opened in Philadelphia 1876.

Trouvelot (born, France December 26, 1827 – April 22, 1895) saw his work and words published in the 1882 book The Trouvelot Astronomical Drawings Manual. The books begins with a short and shouty biography:

FORMERLY CONNECTED WITH THE OBSERVATORY OF HARVARD COLLEGE ; FELLOW OF THE
AMERICAN ACADEMY OF ARTS AND SCIENCES, AND MEMBER OF THE SELENO- GRAPHICAL SOCIETY OF GREAT BRITAIN ; IN CHARGE OF A GOVERNMENT EXPEDITION TO OBSERVE THE  TOTAL SOLAR ECLIPSE OF 1878. 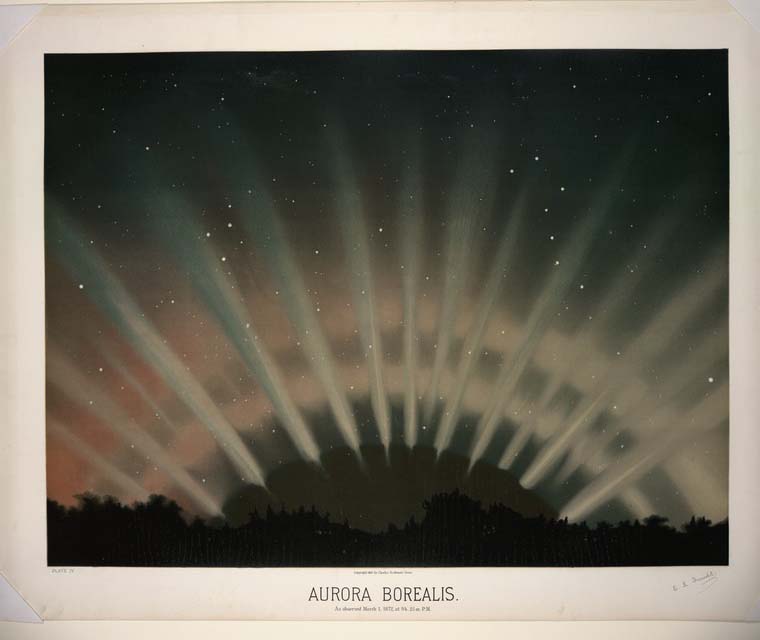 In the book’s Introduction, Trouvelot explains how he produced his pictures 0- and why he believed photography could not “replace the human eye”.

DURING a study of the heavens, which has now been continued for  more than fifteen years, I have made a large number of observations  pertaining to physical astronomy, together with many original  drawings representing the most interesting celestial objects and  phenomena.

With a view to making these observations more generally useful, I was led, some years ago, to prepare, from this collection of drawings, a series of astronomical pictures, which were intended to represent the celestial phenomena as they appear to a trained eye and to  an experienced draughtsman through the great modern telescopes, provided with the most delicate instrumental appliances. Over two  years were spent in the preparation of this series, which consisted of  a number of large drawings executed in pastel. In 1876, these drawings were displayed at the United States Centennial Exhibition at Philadelphia, forming a part of the Massachusetts exhibit, in the Department of Education and Science.

The drawings forming the present series comprise only a part of  those exhibited at Philadelphia ; but, although fewer in number, they are quite sufficient to illustrate the principal classes of celestial objects and phenomena.

While my aim in this work has been to combine scrupulous fidel- ity and accuracy in the details, I have also endeavored to preserve the natural elegance and the delicate outlines peculiar to the objects depicted ; but in this, only a little more than a suggestion is possible, since no human skill can reproduce upon paper the majestic  beauty and radiance of the celestial objects.

The plates were prepared under my supervision, from the original pastel drawings, and great care has been taken to make the reproduction exact.

The instruments employed in the observations, and in the delineation of the heavenly bodies represented in the series, have varied in aperture from 6 to 26 inches, according to circumstances, and to the nature of the object to be studied. The great Washington refractor, kindly placed at my disposal by the late Admiral C. H. Davis, has contributed to this work, as has also the 26 inch telescope of the University of Virginia, while in the hands of its celebrated  constructors, Alvan Clark & Sons. The spectroscope used was made by Alvan Clark & Sons. Attached to it is an excellent diffraction grating, by Mr. L. M. Rutherfurd, to whose kindness I am  indebted for it.

Those unacquainted with the use of optical instruments generally  suppose that all astronomical drawings are obtained by the photographic process, and are, therefore, comparatively easy to procure; but this is not true. Although photography renders valuable assistance to the astronomer in the case of the Sun and Moon, as proved  by the fine photographs of these objects taken by M. Janssen and Mr. Rutherfurd ; yet, for other subjects, its products are in general so blurred and indistinct that no details of any great value can be secured. A well-trained eye alone is capable of seizing the delicate details of structure and of configuration of the heavenly bodies, which are liable to be affected, and even rendered invisible, by the slightest changes in our atmosphere.

The method employed to secure correctness in the proportions of the original drawings is simple, but well adapted to the purpose in view. It consists in placing a fine reticule, cut on glass, at the common focus of the objective and the eye-piece, so that in viewing an object, its telescopic image, appearing projected on the reticule,  can be drawn very accurately on a sheet of paper ruled with corresponding squares. For a series of such reticules I am indebted to  the kindness of Professor William A. Rogers, of the Harvard College  Observatory.

The drawings representing telescopic views are inverted, as they  appear in a refracting telescope the South being upward, the North downward, the East on the right, and the West on the left. The Comet, the Milky- Way, the Eclipse of the Moon, the Aurora Borealis, the Zodiacal Light and the Meteors are represented as seen directly in the sky with the naked eye. The Comet was, however, drawn with the aid of the telescope, without which the delicate  structure shown in the drawing would not have been visible.

The plate representing the November Meteors, or so-called   Leonids,” may be called an ideal view, since the shooting stars  delineated, were not observed at the same moment of time, but during the same night. Over three thousand Meteors were observed between midnight and five o’clock in the morning of the day on  which this shower occurred ; a dozen being sometimes in sight at as they were actually observed.

In the Manual, I have endeavored to present a general outline of what is known, or supposed, on the different subjects and phenomena illustrated in the series. The statements made are derived either from the best authorities on physical astronomy, or from my original observations, which are, for the most part, yet unpublished.

The figures in the Manual relating to distance, size, volume, mass, etc., are not intended to be strictly exact, being only round  numbers, which can, therefore, be more easily remembered.

It gives me pleasure to acknowledge that the experience ac-  quired in making the astronomical drawings published in Volume VIII. of the Annals of the Harvard College Observatory, while I was connected with that institution, has been of considerable assistance to me in preparing this work ; although no drawings made  while I was so connected have been used for this series. 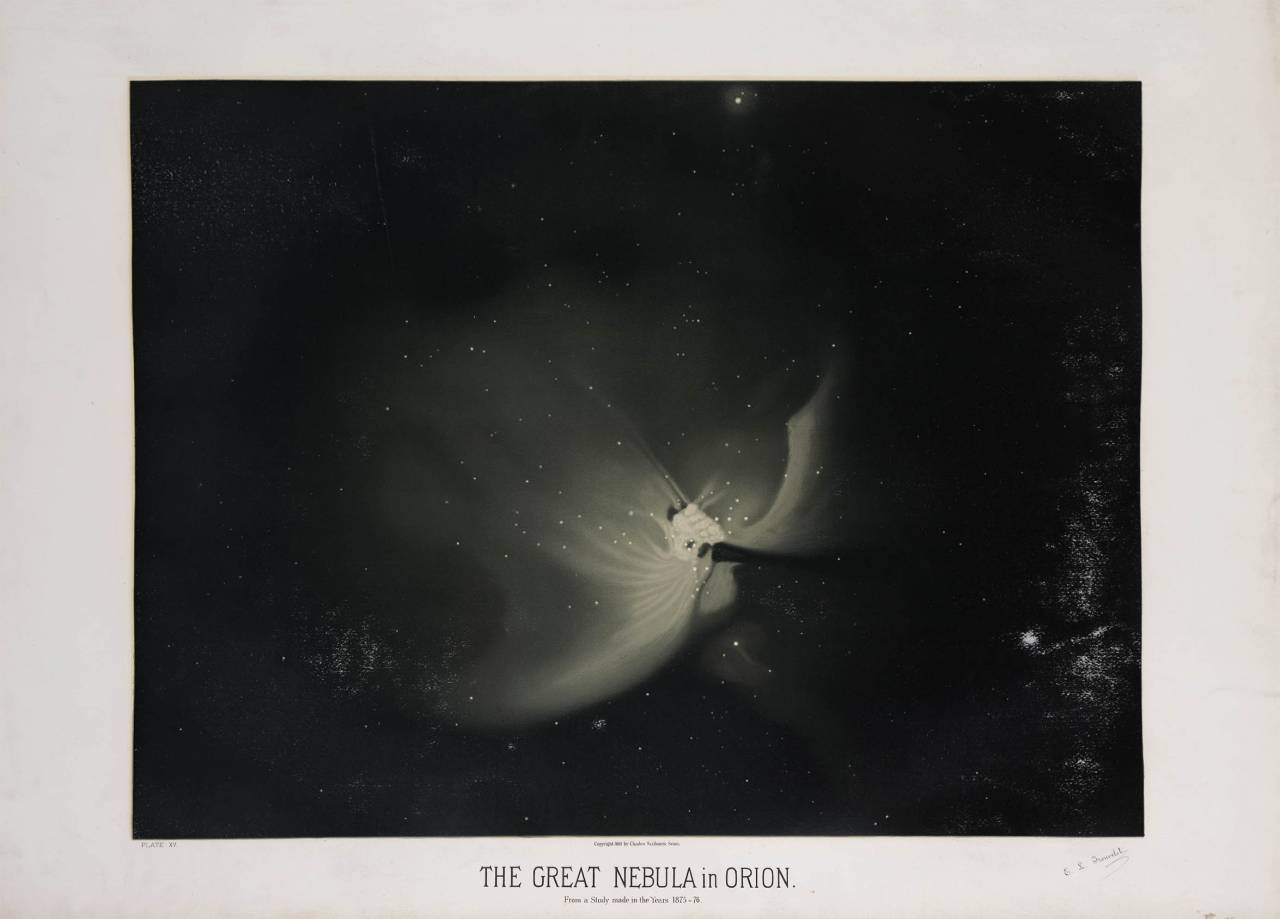 Bibliodyssey has an interesting aside on Trouvelot:

Trouvelot had a particular love for silkworms and he had a 4 acre plot behind his house where he cultivated a native variety. To increase production he hoped to crossbreed the regular type with a species from Europe. He brought back Gypsy Moth eggs from a trip home and so introduced a virulent pest that ravages forests in America to this day. To his (slight) credit, he realized the enormity of the problem straight away when some of the introduced moths escaped. He made it publicly known, but unfortunately local entomologists did nothing at the time to eradicate them. 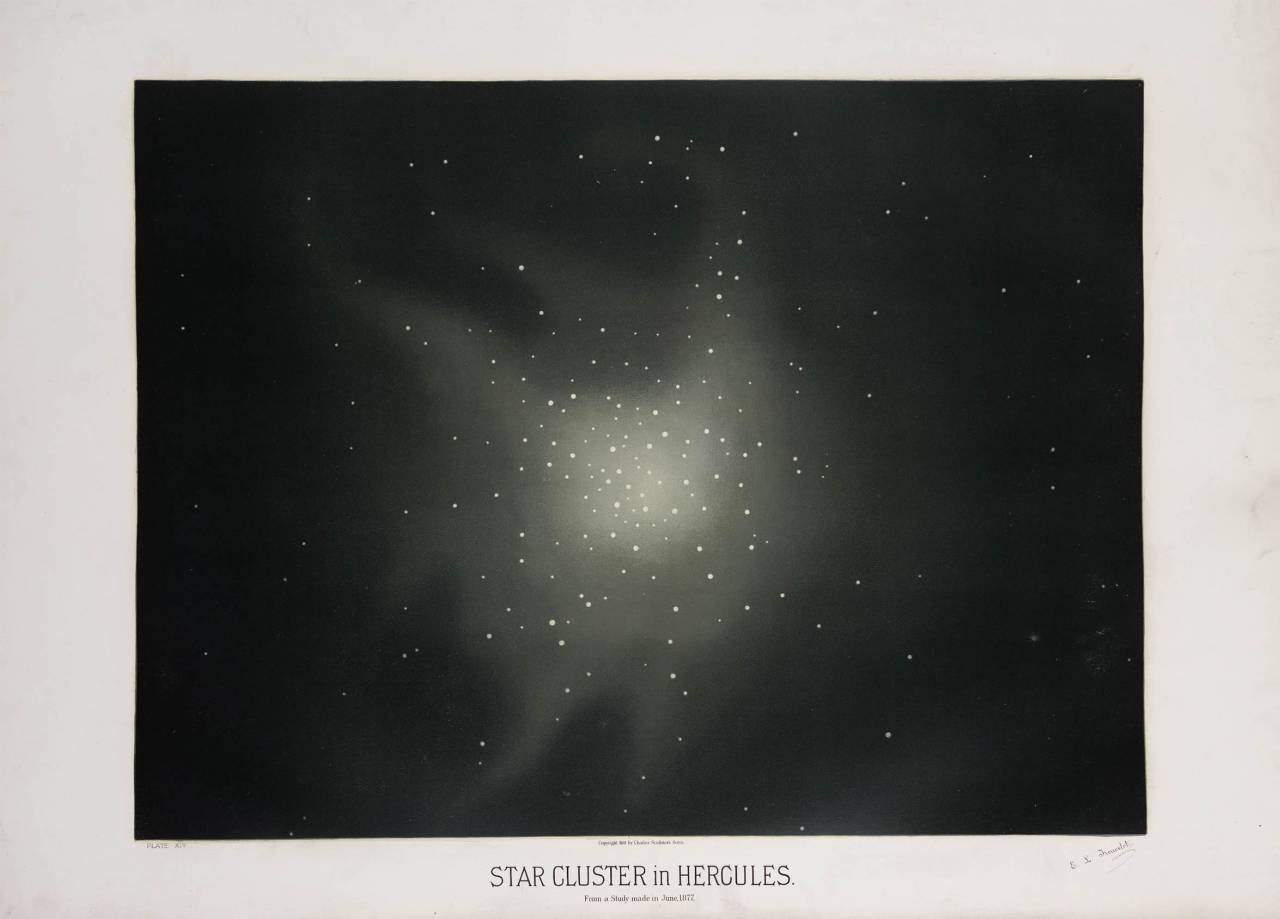 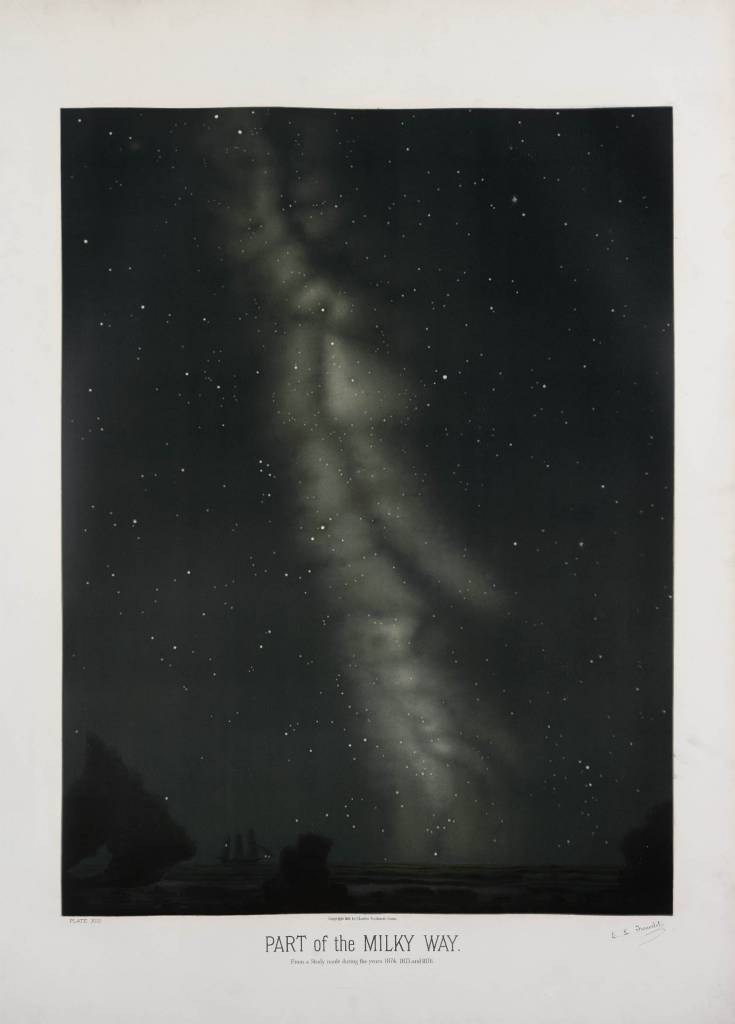 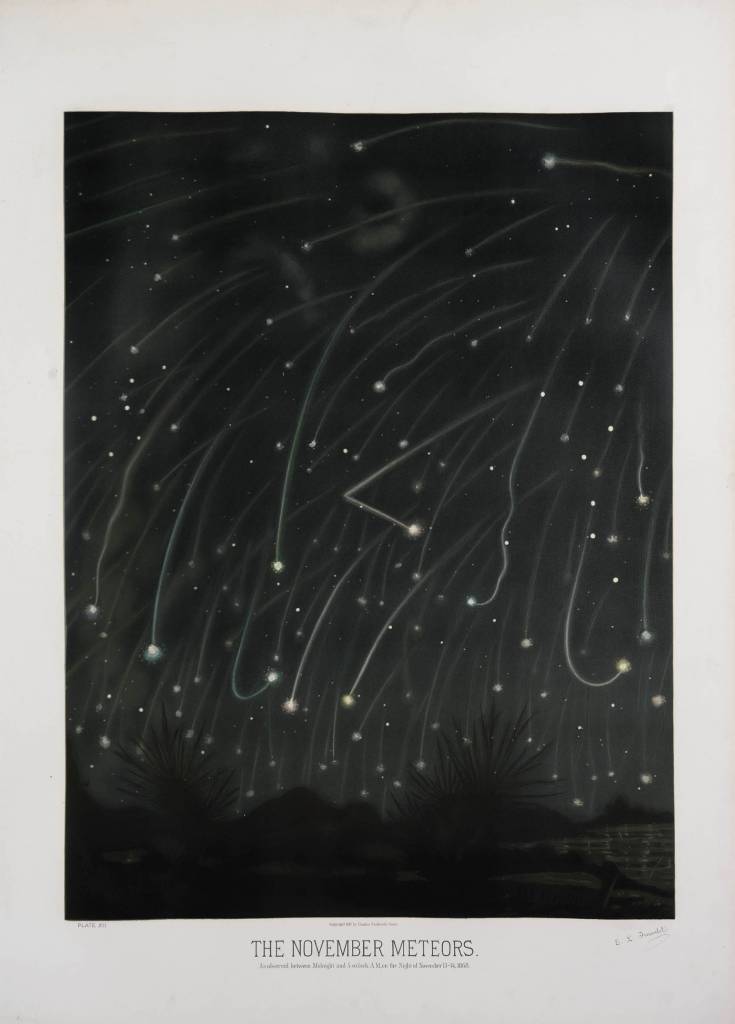 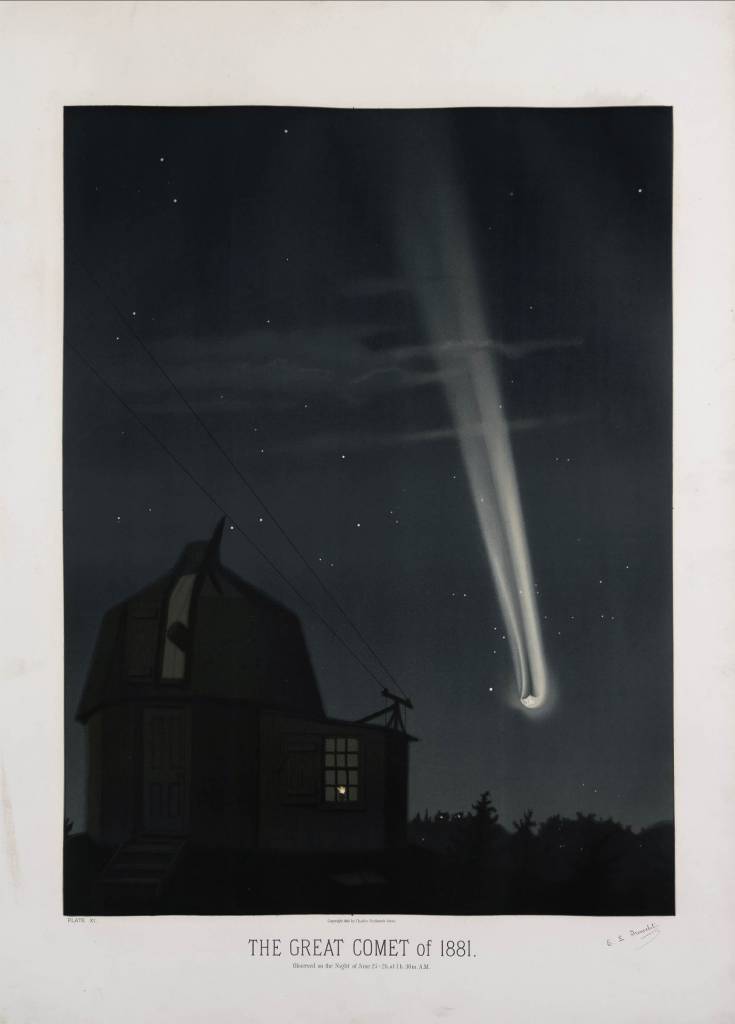 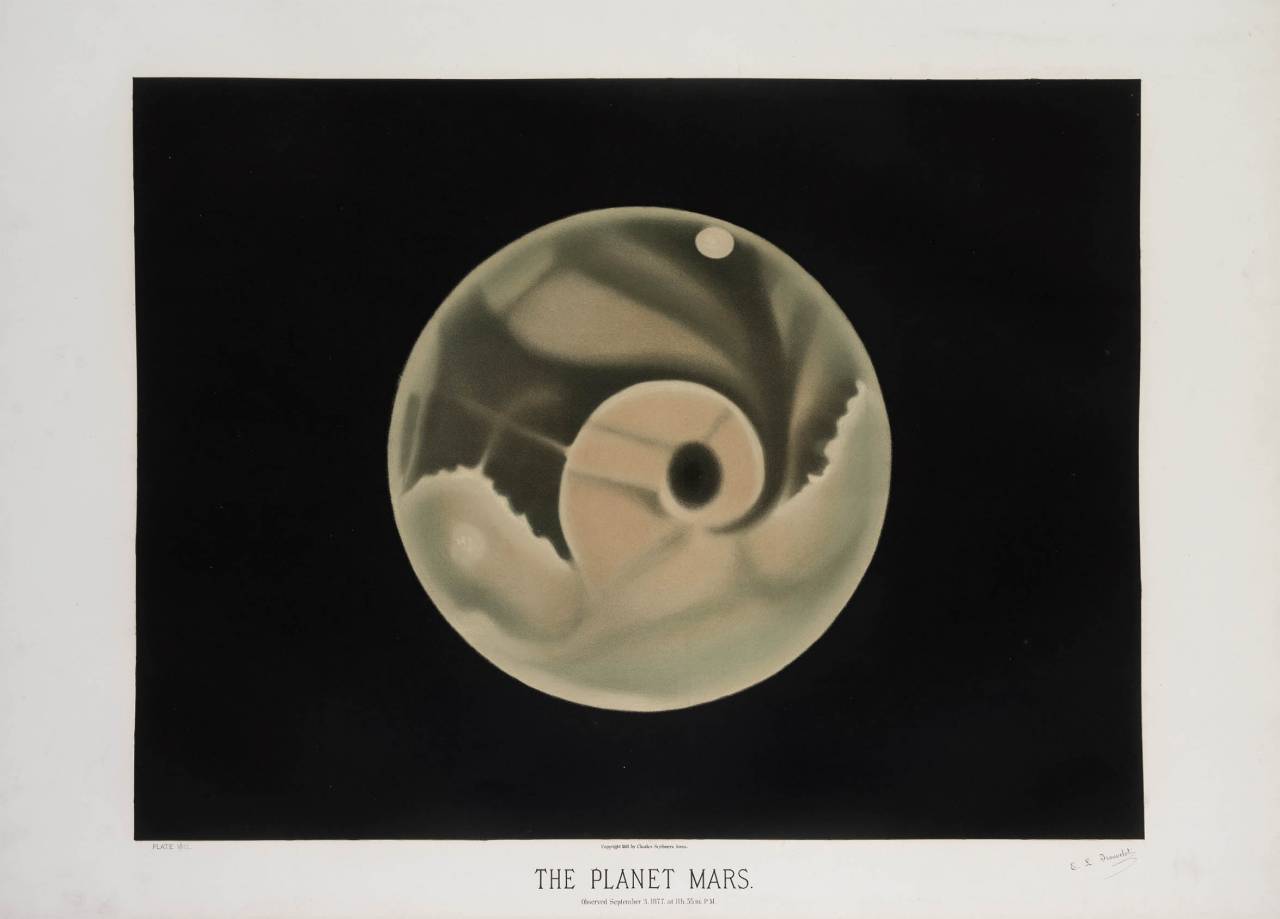 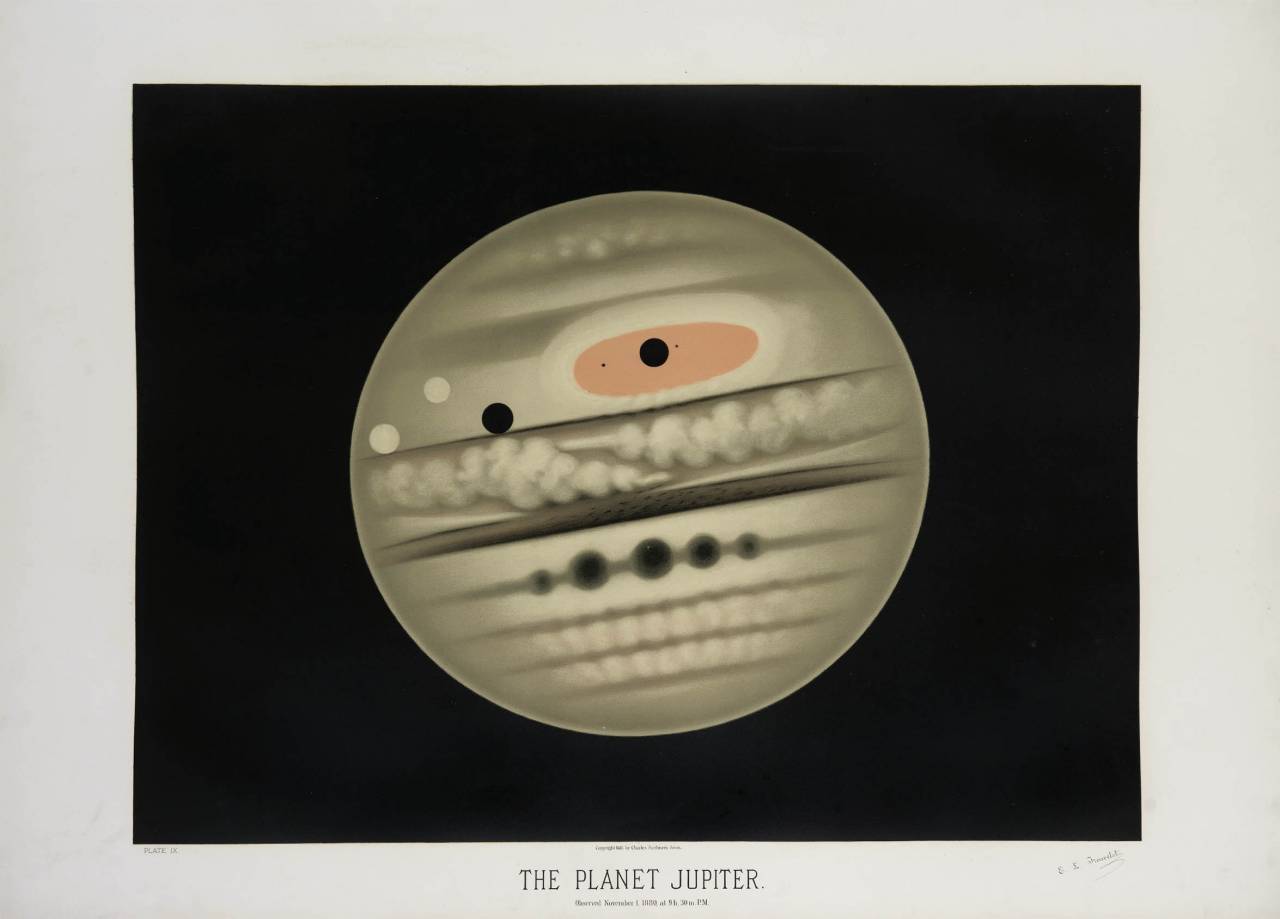 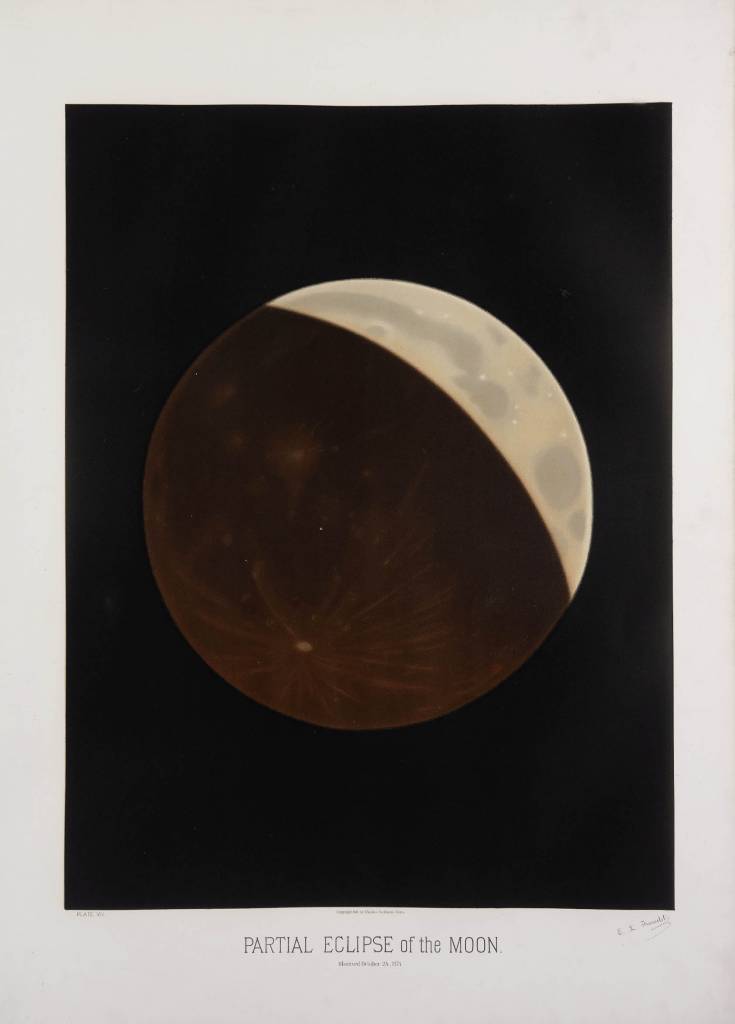 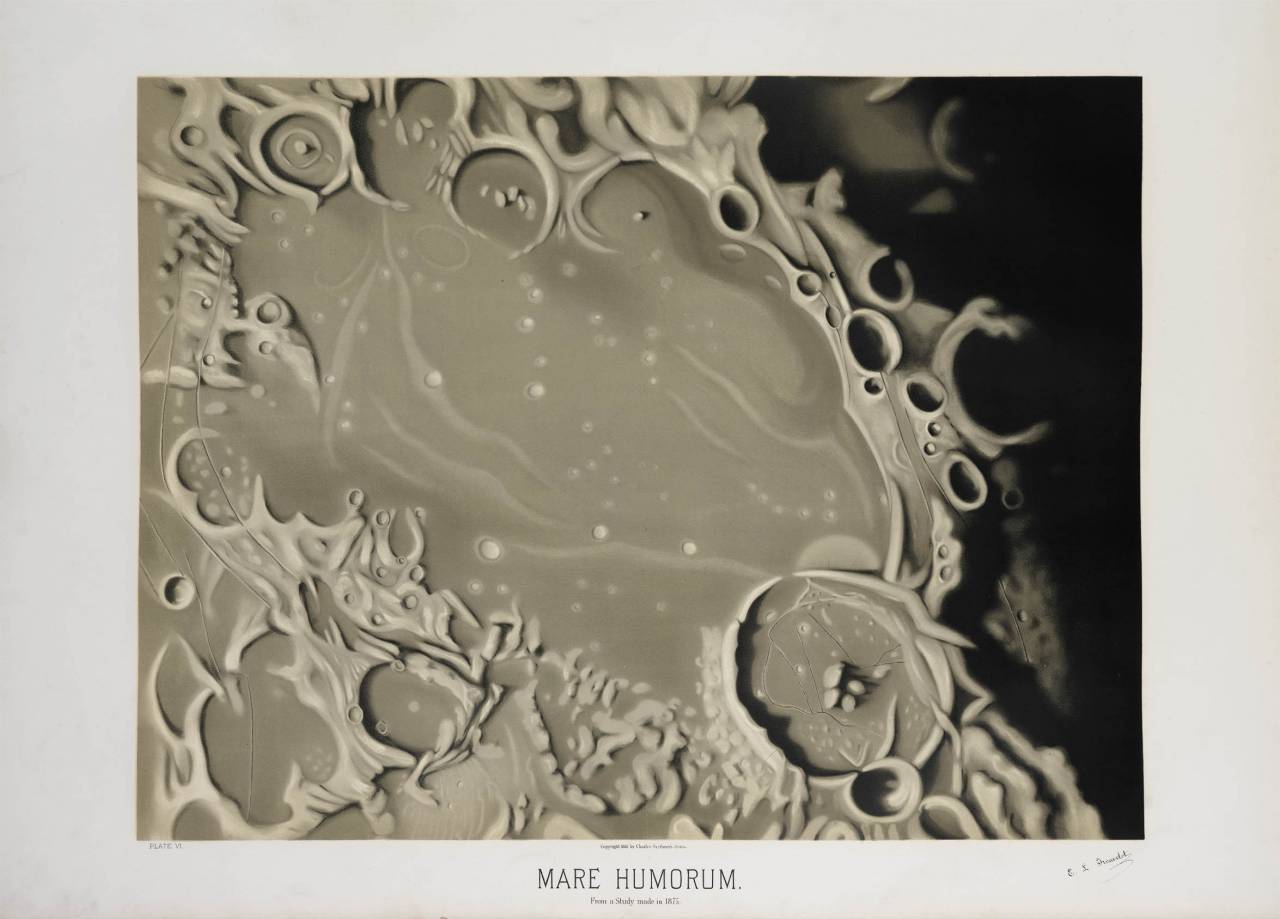 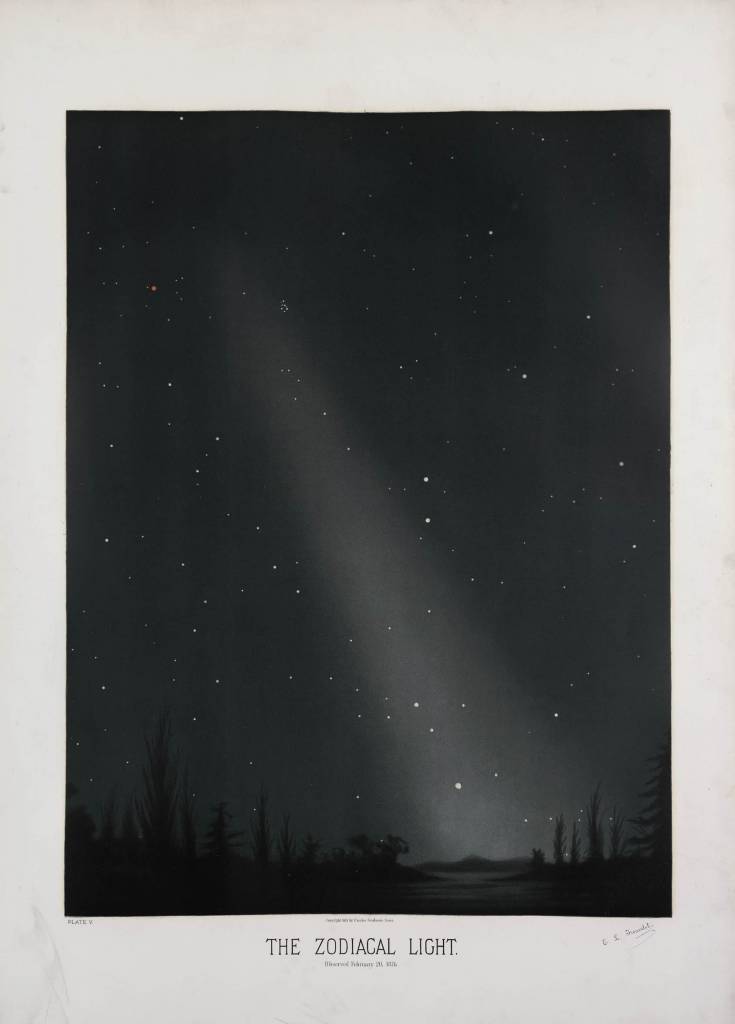 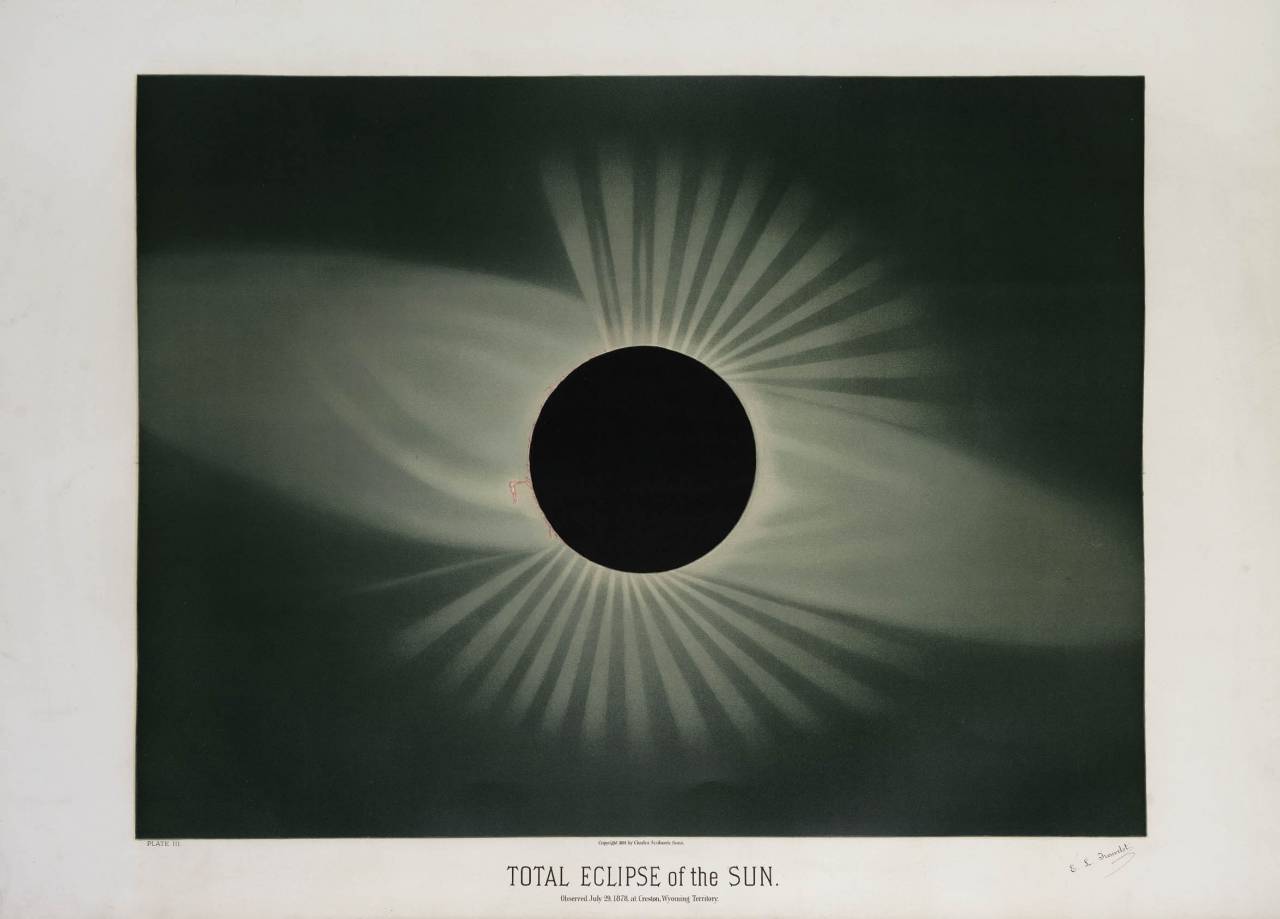 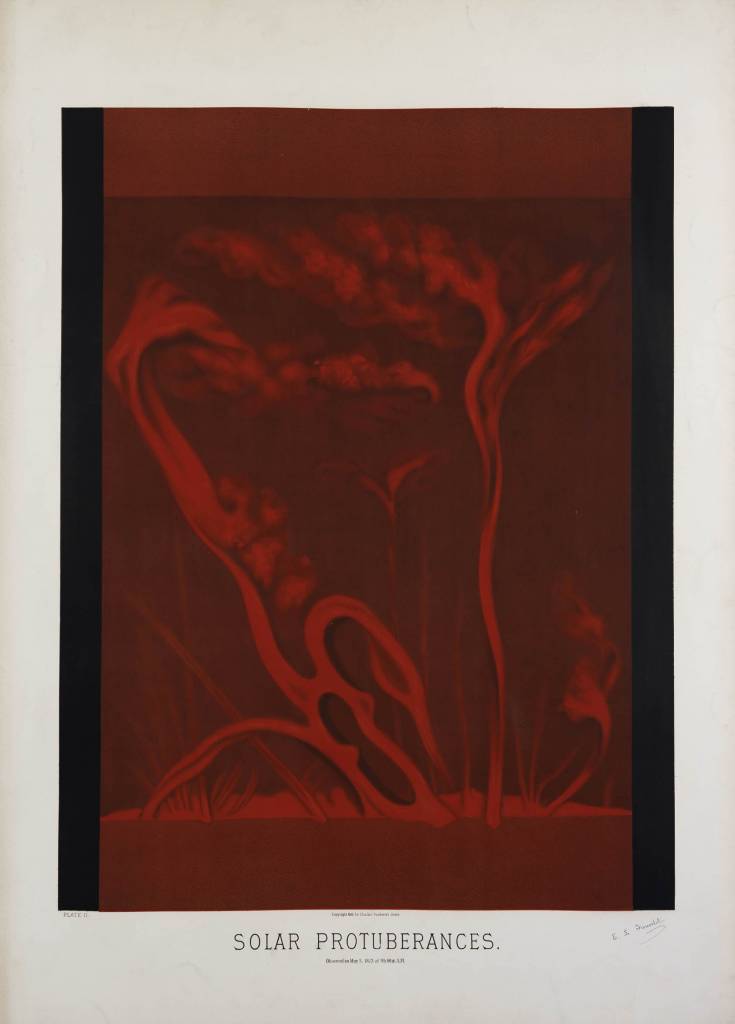 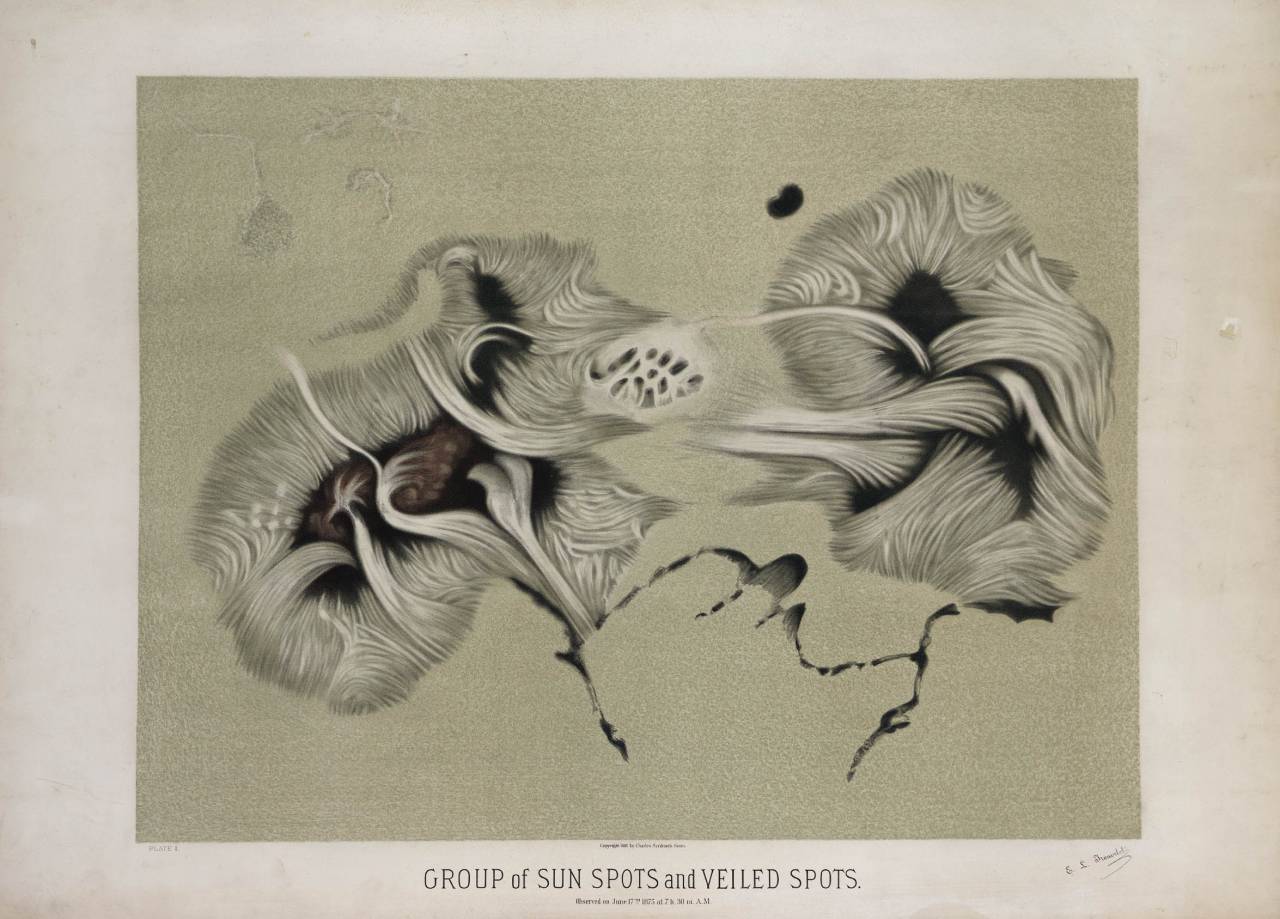