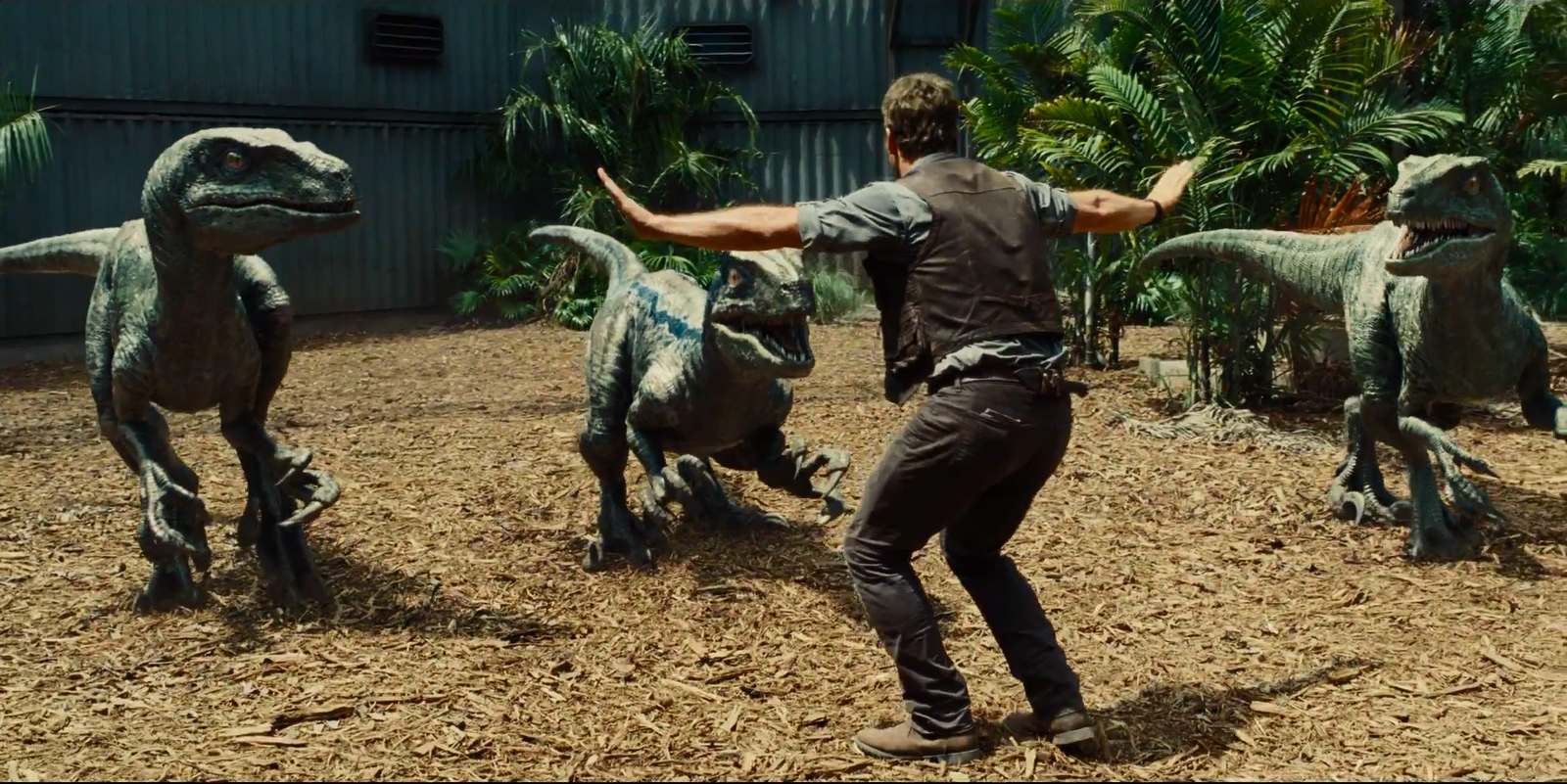 Jurassic World (2015) — the third sequel to Steven Spielberg’s Jurassic Park (1993) — opens this week in theaters in the United States, and appears certain to carry on in its predecessors’ footsteps.

That means not only more rampaging dinosaurs, but a deliberate charting of what disasters can occur when science runs amok; when man dares to “tamper in God’s domain” of creation.

This conceit — of genetic science as a Pandora’s Box of sorts — proved a key element of the horror films of the 1990s, including JP.

If we consider that the best horror movies always deliberately reflect society’s fears, then one can pinpoint events in the Clinton Decade — the 1990s — that helped to bring this old Frankenstein trope to the forefront.

In October of 1990, for example, the Human Genome Project commenced.  And in 1997, a sheep named Dolly was cloned.  New doors were being opened, it appeared. 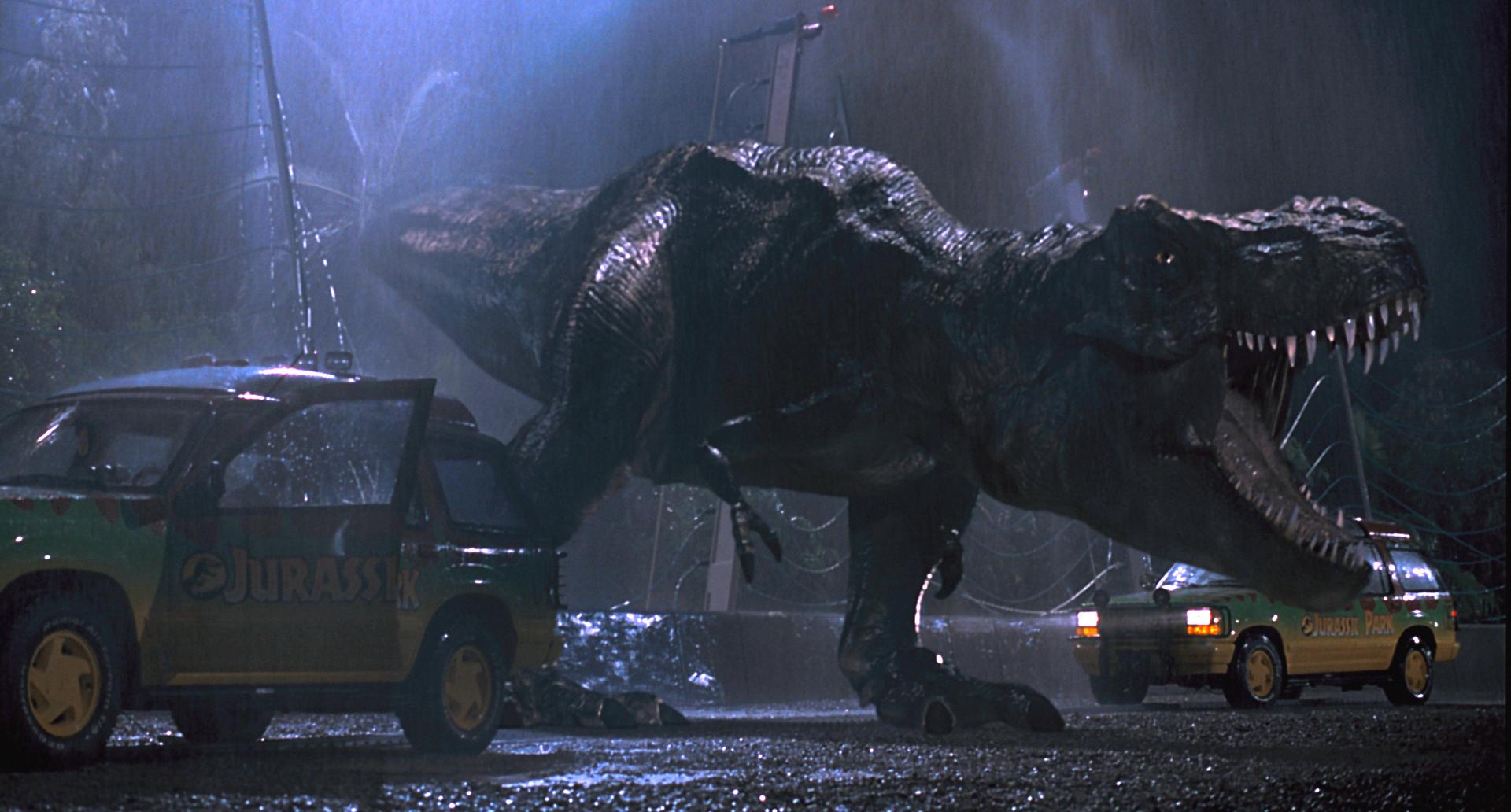 In all cases, “life found a way” (to quote Jurassic Park’s Dr. Alan Grant) to spread, thus threatening to up-end man’s dominance on planet Earth. In such films, the audience had to ask: what kind of a self-destructive creature is man that he is so willing to (genetically) engineer threats to his supremacy over the Earth?

Besides Spielberg’s Jurassic Park, here are some of the other “Life Finds a Way,” or “Don’t Tamper in God’s Domain” horror films of the 1990s that we might remember on the eve of Jurassic World. 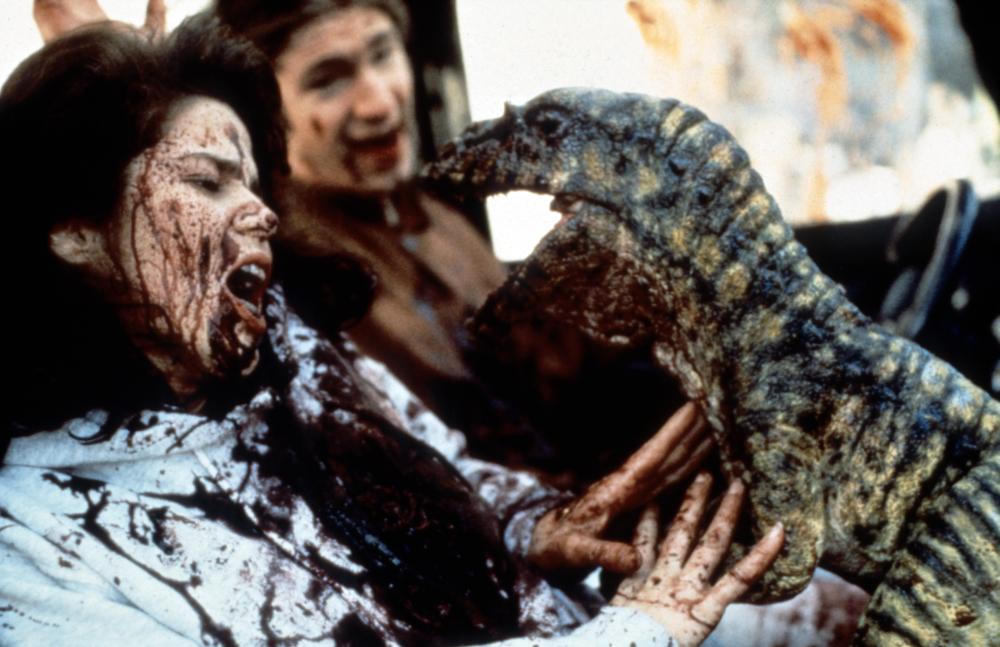 Roger Corman never misses a trick, and in the year of Jurassic Park (1993), this legendary producer also managed to get a dinosaur/genetic engineering/mad-scientist movie made.

The low-budget Carnosaur is the story of crazy Dr. Jane Tiptree (Diane Ladd), a scientist whose very name “tip tree” suggest her relationship with Mother Nature: she is willing to knock it over to get what she wants.

Here, Tiptree creates a new breed of dinosaur in the twentieth century, but also a deadly virus or fever that causes healthy human women to give live birth to these terrible lizards. Tiptree sees this plan as a restoration of Earth’s original path, not a usurping of man’s dominance.

One scene in the film sees Clint Howard’s character (Friar) decapitated by a dinosaur, and another features a dinosaur attacking drunken teens inside their car.  But the overall message of Carnosaur is that science has run amok, with Ladd’s character rewriting Earth’s history to give dinosaurs a second change.

And what will “dinosaur highway” look like populated by real, living dinosaurs?

Well, as Carnosaur notes with a wink, it might make a great “theme park.” 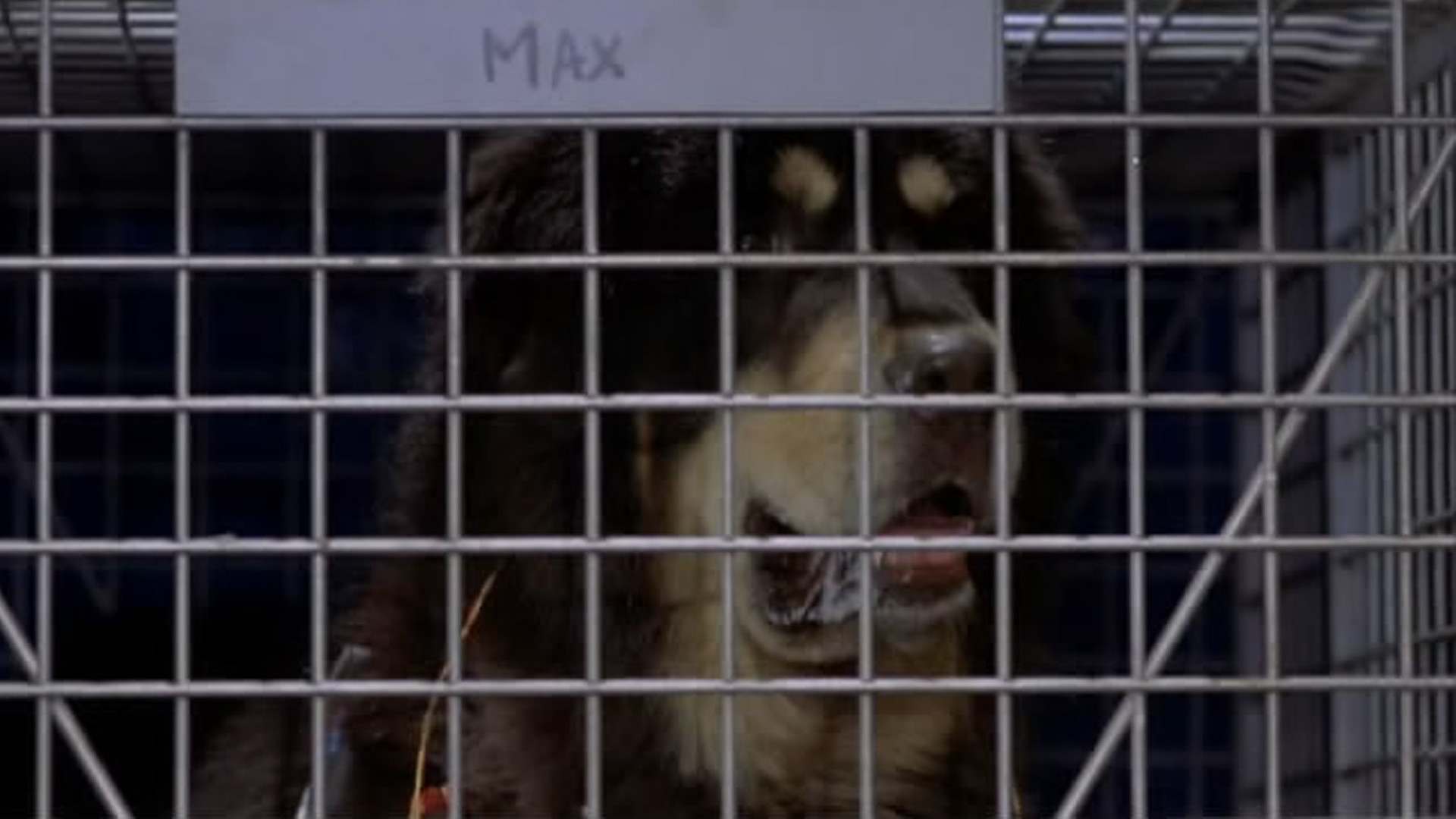 In this film, a twisted scientist — Dr. Jarret (played by the incomparable Lance Henriksen) — creates a genetically-engineered guard dog, Max.

Made at Jarret’s E-Max Laboratories, this dog possesses the DNA of owls, bears, jaguars and other animals. He’s literally a “Frankenstein’s Dog.” He can even become invisible because of chameleon DNA, for instance.

In the course of the film, Max is stolen from his lab by a reporter, Lori Tanner (Ally Sheedy) and taken home as a pet.

There, Max promptly kills Lori’s pet parrot, urinates on the face of her boyfriend, watches Lorie take a shower, attacks newspaper delivery boys and a mail-man, and even chases the neighbor’s cat up a tree.

The movie’s climax suggests that life finds a way when Max proves himself a horn dog.  Turns out that he has mated, and his Frankenstein dog line will be continued…

Today, nobody remembers anything positive about this film at all, only the strange train wreck of Brando’s central performance.

But if you can get past that (admittedly huge…) obstacle, one sees that the movie is all about a man who plays God — even creating a mini-me version of himself — simply because…he can.  But like Victor Frankenstein, Moreau is a bad father, creating life without feeling any particular responsibility to protect it or nourish it.  When he is dead, the order imposed by Father disappears, and the monsters slip into anarchy… 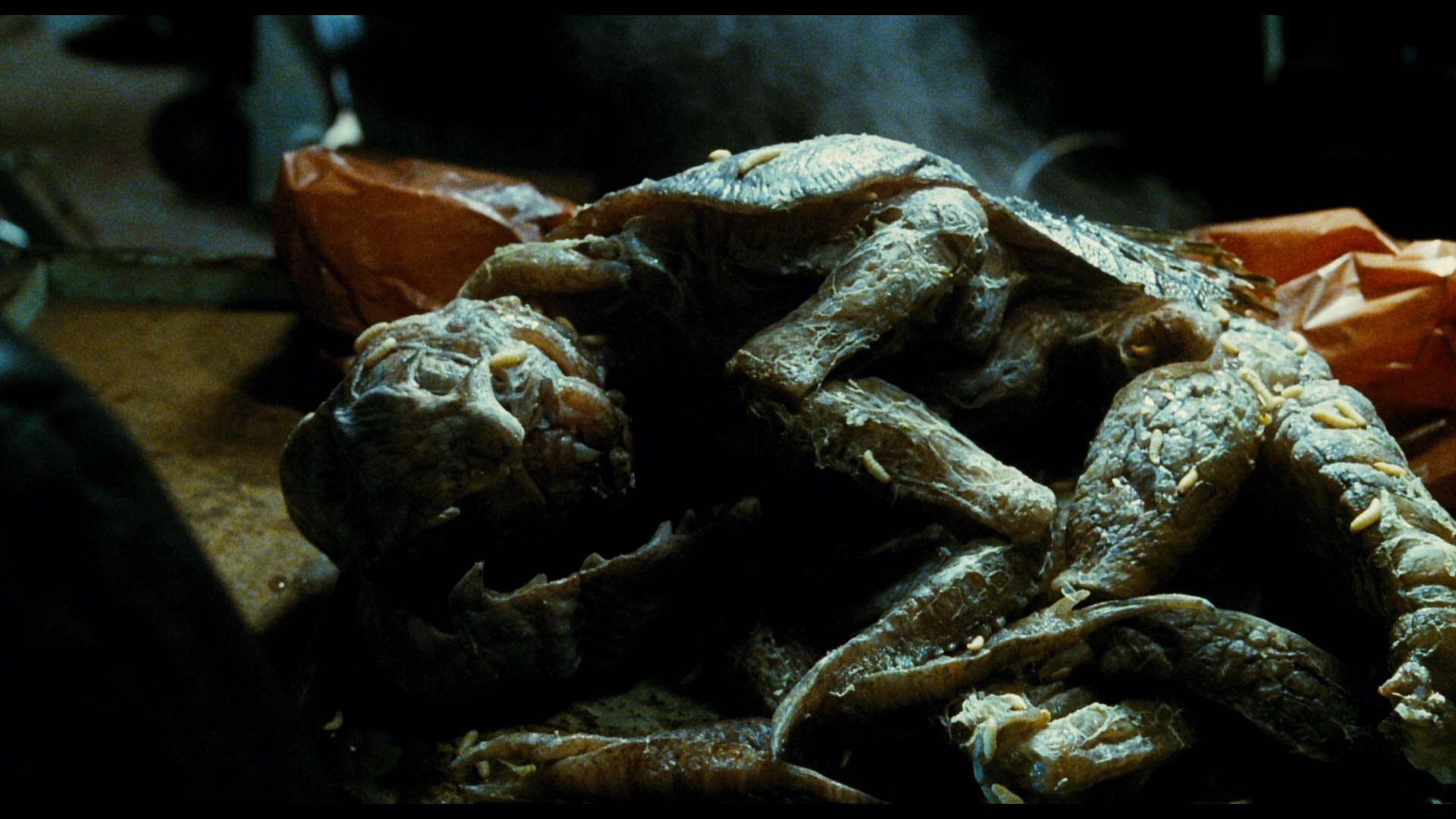 The Judas Bugs are supposed to self-terminate after one generation…but life finds a way. Or as one character in the film less elegantly puts it, “evolution has a way of keeping things alive.”

Now the Judas Bugs have learned to imitate their most dangerous predator, man, and are creating a huge nest in the subways under New York City.

Dr. Tyler, who wishes to become a biological mother, is suddenly confronted with a breed of offspring she hoped never to encounter.

In both cases, the subtext is all about Mother Nature too.  Man (John Hammond) — or woman (Dr. Susan McAlester) — attempts to play God, to re-write nature.

Man proposes and God disposes, that’s the key messages of these 1990 horror films.  Both the raptors of Jurassic Park and the sharks of Deep Blue Sea escape their cages to wreak havoc, thus defying man’s plans for them.  Man, having created a predator positioned above him on the food chain, must then fight for his very survival.

Dr. McAlester (Saffron Burrows) pays for her transgression.  She tampered in God’s domain, and before long, she’s…fish food.