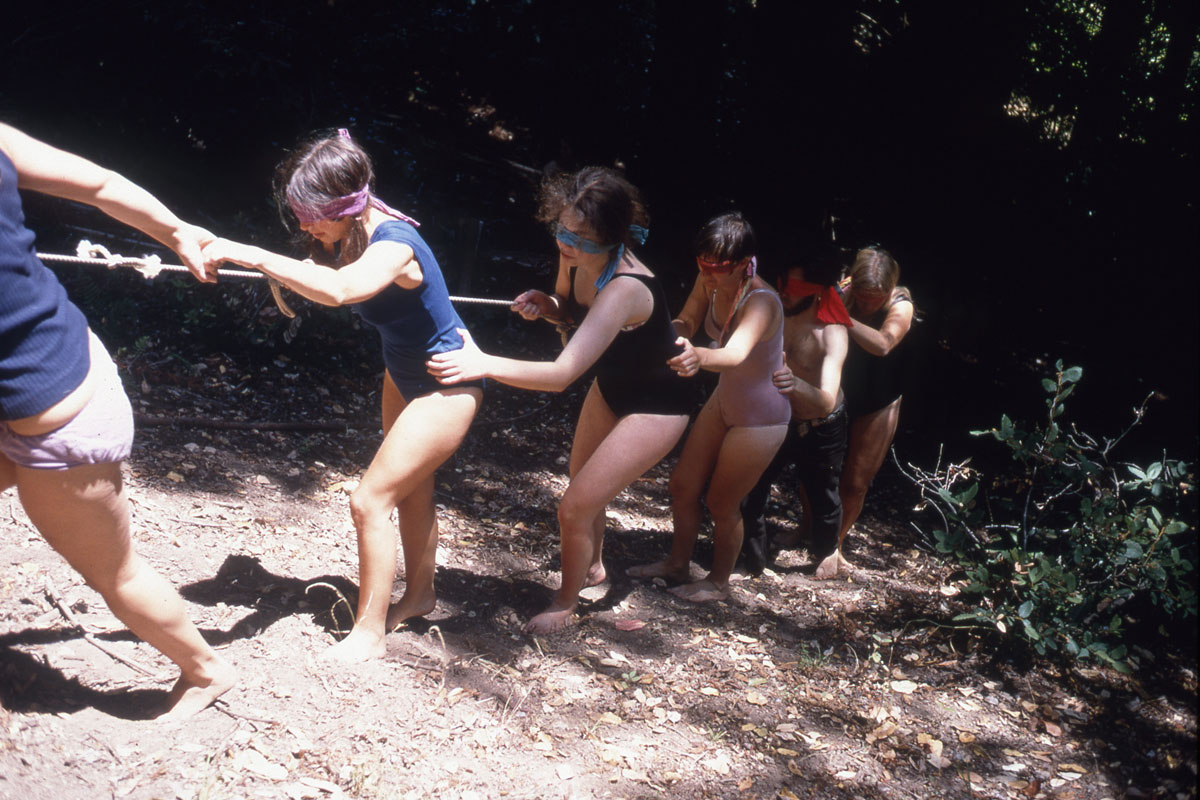 Dance and architecture are kindred spirits in their devotion to the human form, whether it’s in motion or at rest, within or outside the confines of natural or manmade spaces. Each discipline is governed by a number of self-evident truths—at some point, the feet of even the fleetest dancer must touch the ground; spaces that induce claustrophobia are bad—yet both are deemed at their pinnacles when hoary conventions are tossed aside.

Between 1966 and 1971, Anna (born 1920) and Lawrence Halprin (1916–2009), a dancer and landscape architect respectively, cast off as many of their vocations’ traditions as their mid-20th-century sensibilities would permit when they organized a series of workshops in San Francisco, at their Kentfield home in nearby Marin County, and at a real-estate development called Sea Ranch a bit farther north on the Sonoma County coast. Ostensibly focused on dance and landscape architecture, the workshops, held in 1966, 1968, and 1971, were designed to help people experience movement and spaces in new and unexpected ways, thereby giving participants a window into their place in the world. 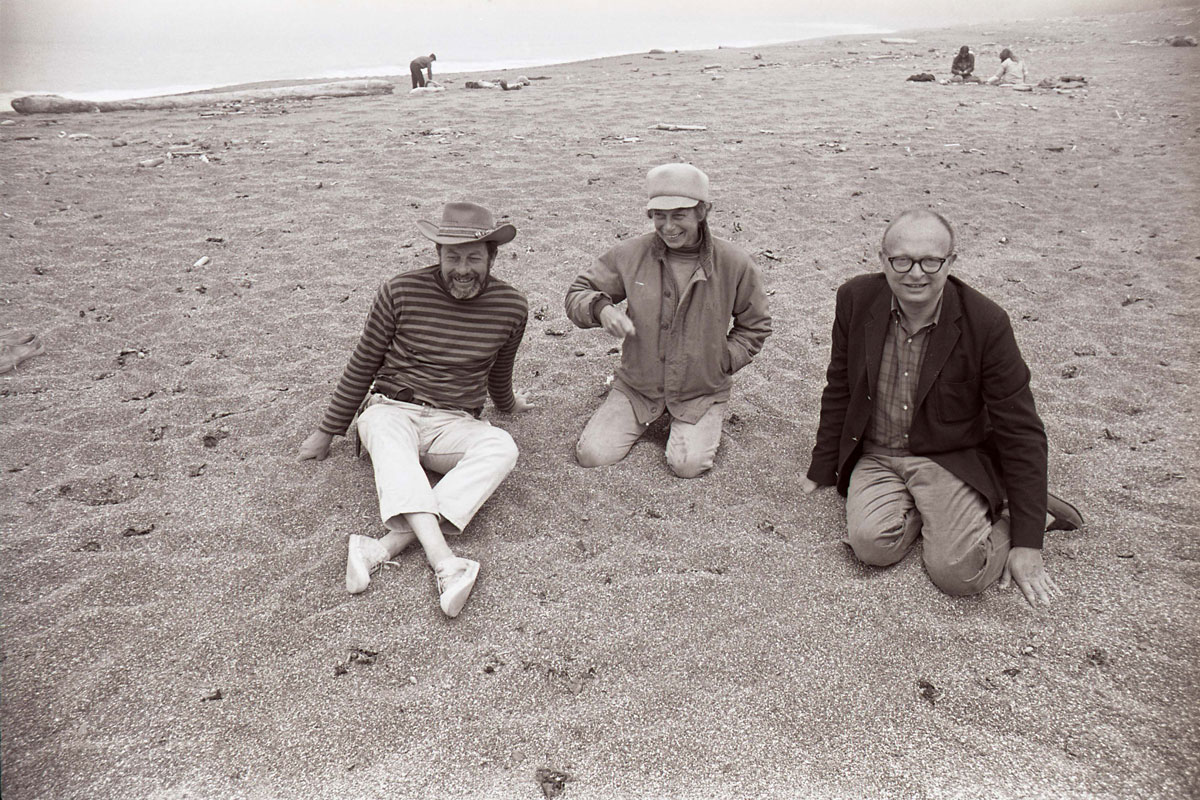 In 2014, the Graham Foundation of Chicago gathered together videos, photographs, and documents from the Halprin archives at the University of Pennsylvania to create an exhibition titled “Experiments In Environment: The Halprin Workshops, 1966-1971.” The goal was to give 21st-century gallery-goers a taste of what these workshops must have been like. Now though July 3, 2016, this same exhibition, supplemented by materials about the Halprins and the San Francisco psychedelic scene, is on view at the California Historical Society in San Francisco.

Unwittingly, no doubt, these additional photographs, magazine articles, and other scraps of ephemera, collected and arranged for display by the California Historical Society, paint the Halprin workshops as rather stiff exercises, at least when compared to the counterculture expressions that were so common to the free-spirited, hippie milieu of northern California in the late 1960s. 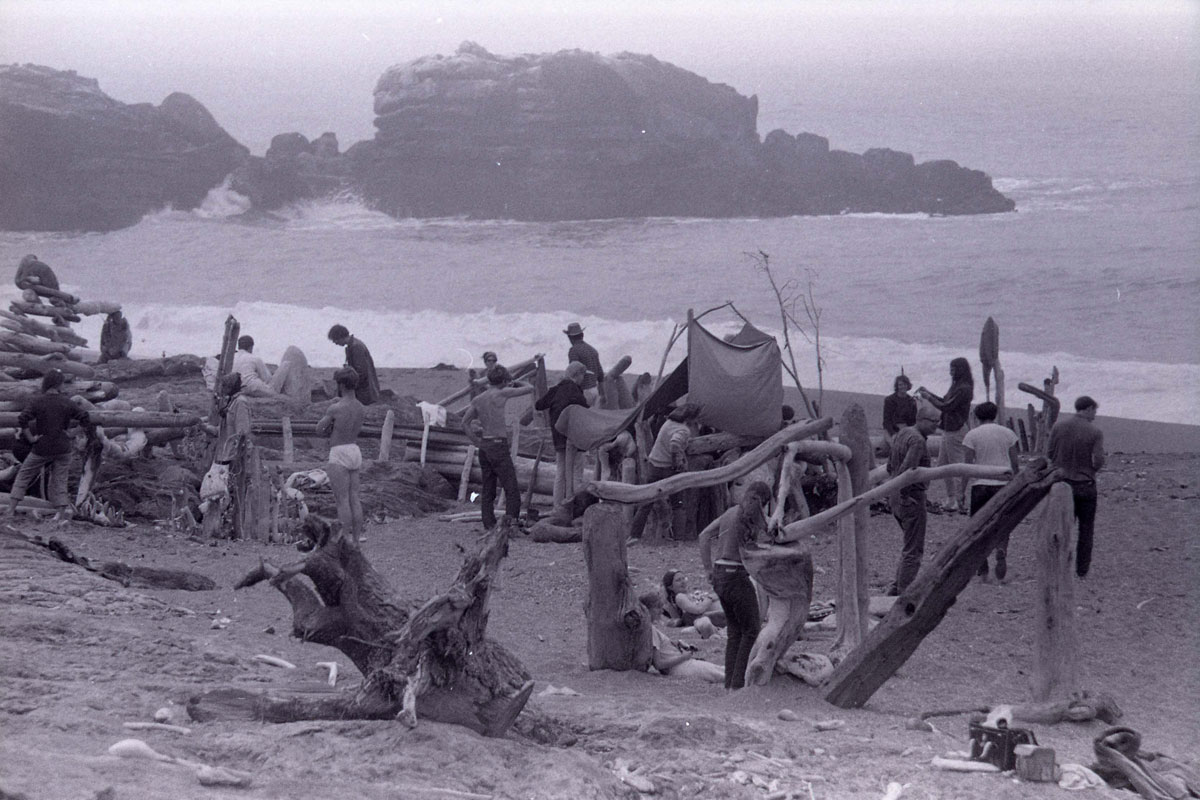 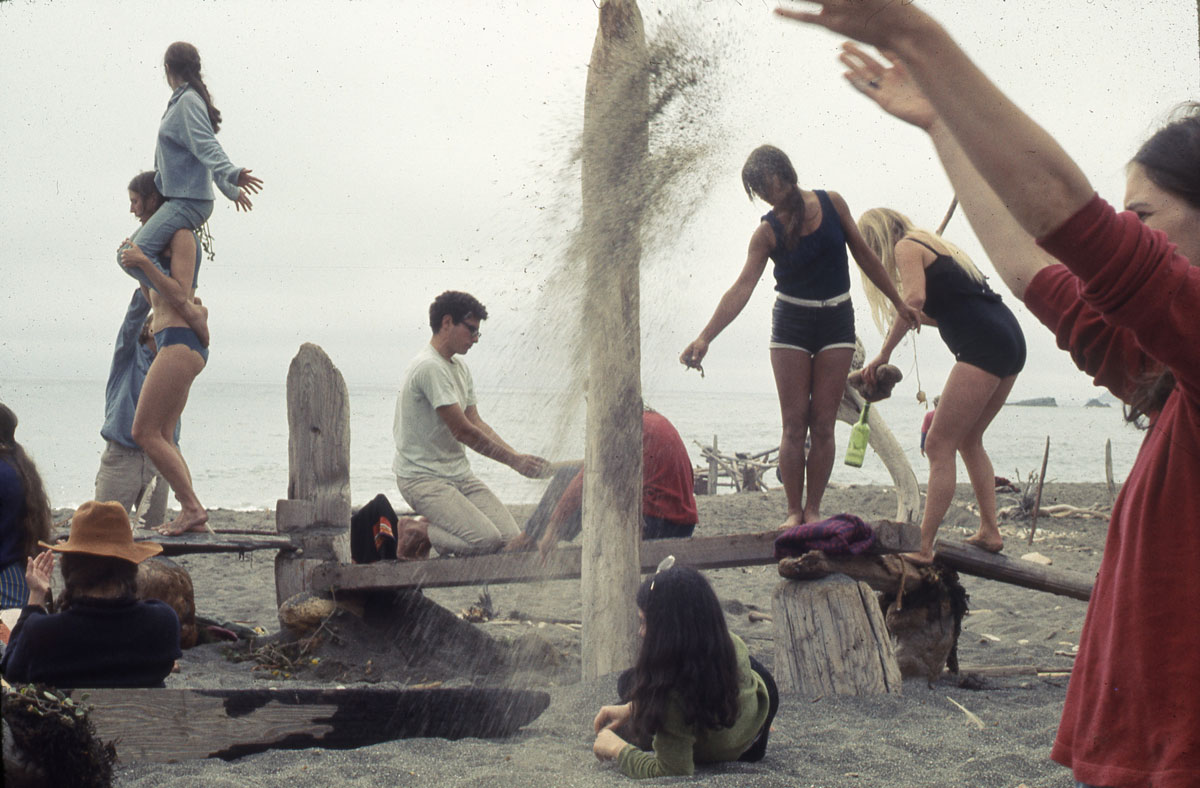 Consider the first workshop in 1966, which was held in San Francisco, at the Halprins’ home, and up at Sea Ranch between June 27 and July 22, and cost attendees $250 per person, plus transportation, food, and lodging. Workshop activities were led by the Halprins and taught by a “faculty” that included architect Charles Moore and electronic-music composer Morton Subotnick. Depending on the day, attendees walked blindfolded, danced on a redwood deck behind the Halprin’s home, got naked, and built a driftwood city in silence on a secluded Sea Ranch beach (Halprin wrote the master plan for that upscale vacation community, while Moore designed many of its actual homes).

The problem, of course, is that in 1966, anyone in the San Francisco Bay Area could engage in as much sensory deprivation -or enhancement – as they liked, and probably get laid for their trouble. Indeed, people living in San Francisco’s Haight Ashbury neighborhood and camping out at Marin County’s Muir Beach were conducting “experiments in environment” pretty much 24/7, without any academic mediation whatsoever. At the California Historical Society galleries, we see evidence of this exuberance in concert posters from the Straight Theater on Haight Street, flyers from grassroots community-arts organizations such as the Diggers, and a loopy interview with members of the Grateful Dead in a scruffy predecessor to Rolling Stone magazine called “Mojo Navigator R&R News.” 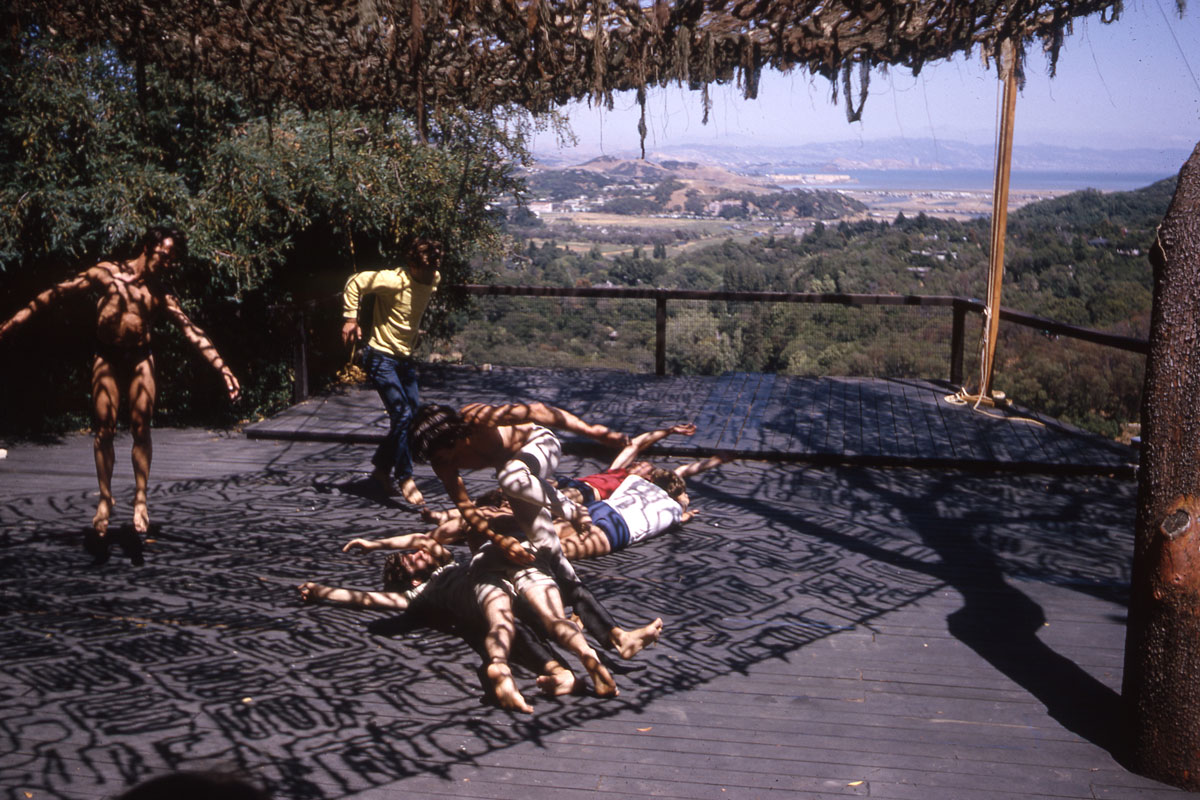 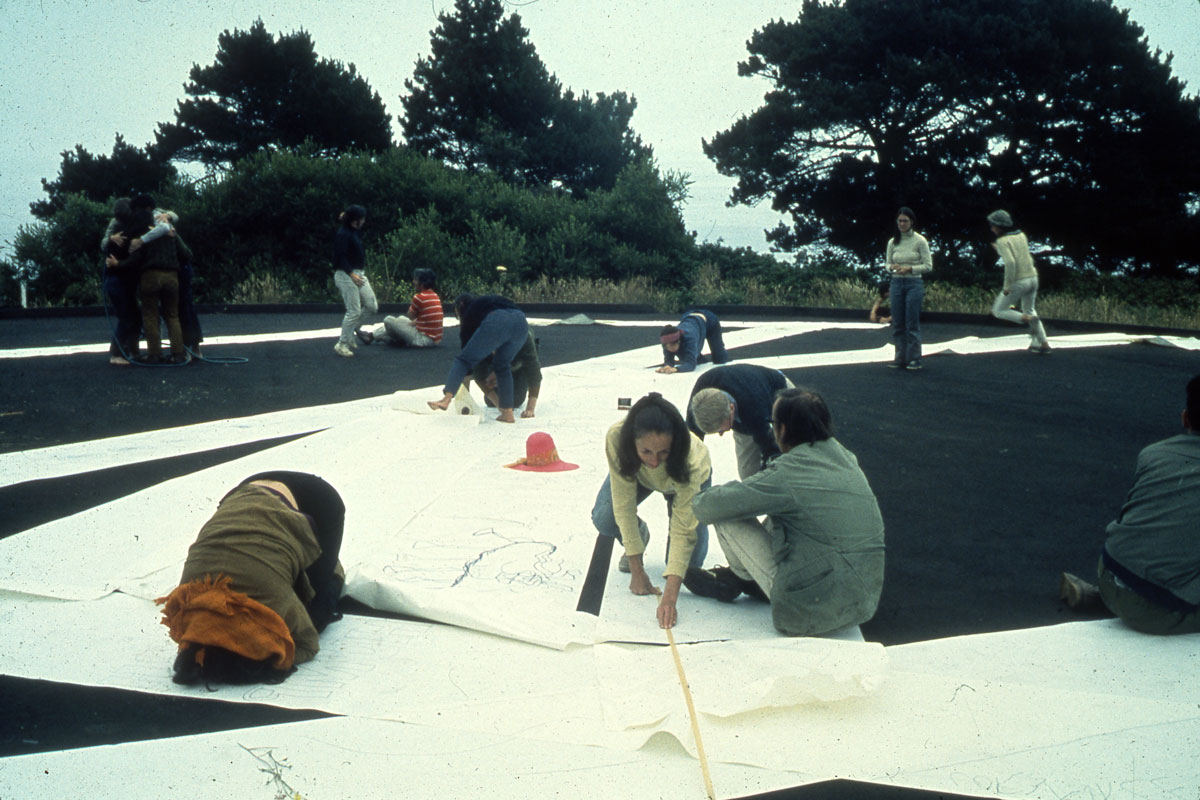 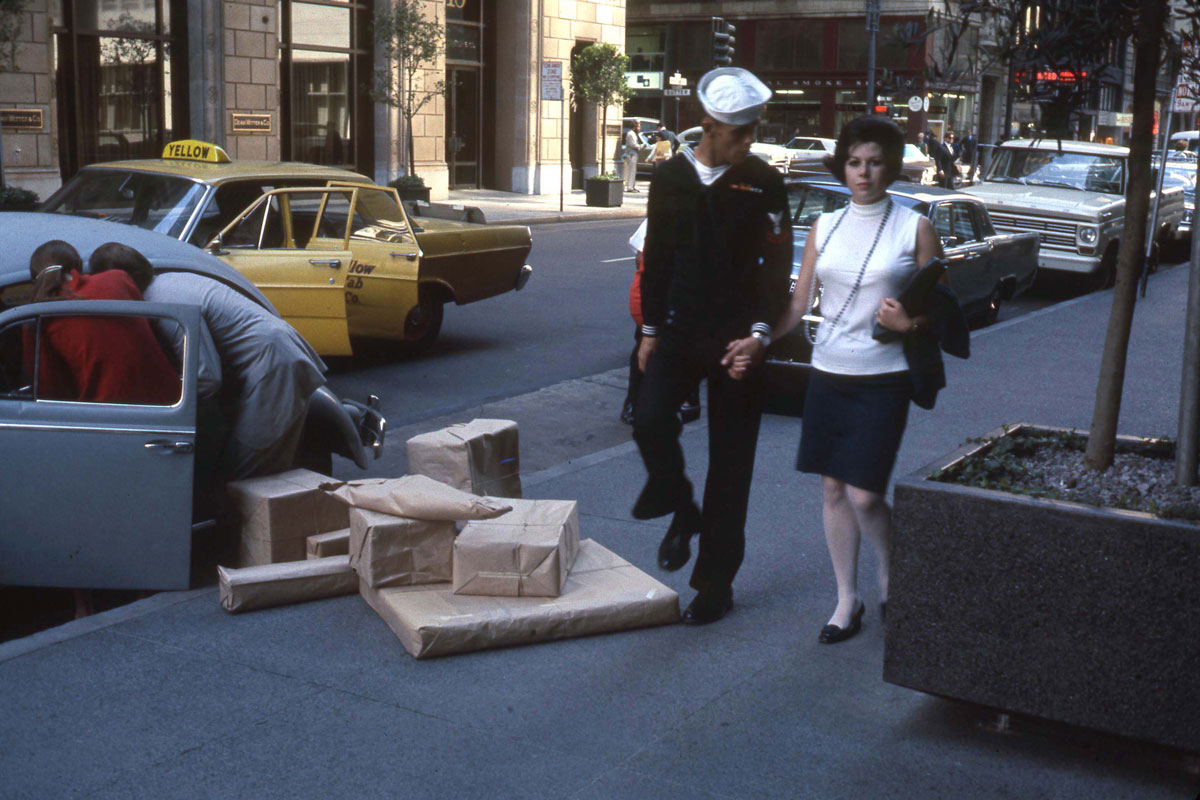 Delving into that slice of late-’60s history is always a whole lot of fun. In comparison, the artifacts describing the methodology of the Halprin Workshops seem downright stodgy, weirdly academic in an era when the counterculture was giving the academy the proverbial finger. By the time the final workshop rolled around in 1971, the lofty, open-ended goal of “environmental awareness” from 1966 had devolved into “leadership training,” funded by a grant from the U.S. Department of Housing and Urban Development, no less.

Today, it’s easy to smirk at that unimpressive arc, but you have to admire the poetry of the Halprins’ initial impulse. For them, all the world was not so much a stage as a musical score written in real time, our actions no more or less than the music of life itself. 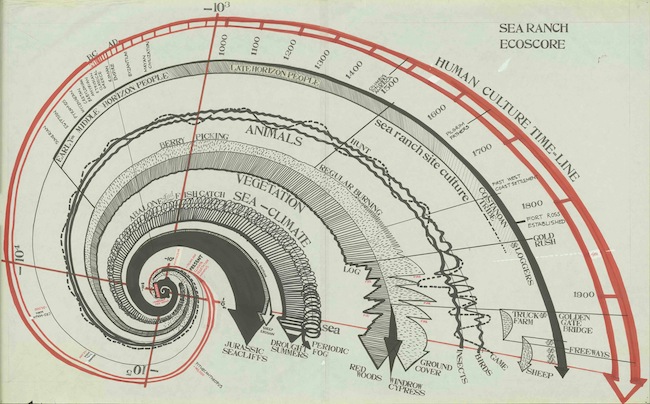 In fact, Lawrence Halprin had long embraced this music metaphor. Predating the workshops, his firm’s “Ecoscore” for Sea Ranch, executed in 1962 as a first step in defining the community’s master plan, put the real-estate development in the context of its site’s history, going all the way back to the Jurassic period when dinosaurs roamed the Earth. Resembling the cross section of a chambered nautilus shell, the Ecoscore was intended to remind developers and architects alike that people had been picking berries, hunting, and living at Sea Ranch for thousand of years before the Europeans and Russians arrived in the 17th and 18th centuries. Normally, architects sell their projects to clients by hyping their importance; the Ecoscore was designed to highlight Sea Ranch’s insignificance. 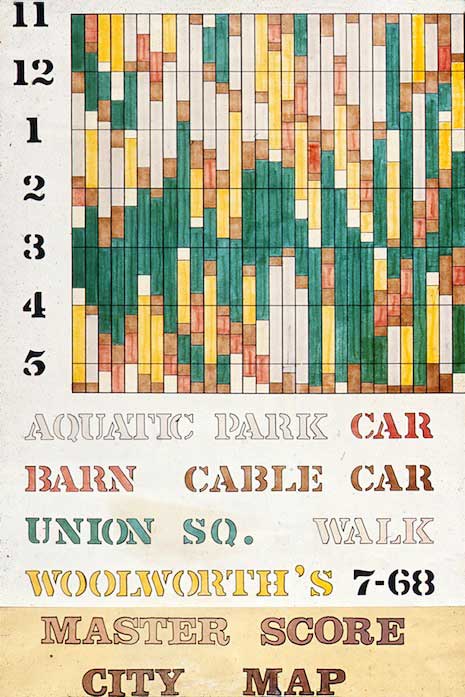 For the Halprins, though, scores for the music of life didn’t always have to be so sweeping, as seen in the “City Map Score” for an outing in San Francisco on July 1, 1968, when their second workshop, whose focus was “community,” was held. In this diagram, we see communities form and dissolve, as participants make their way around the city, guided by experiential activities supplied by the Halprins. According to the score, which appears to have been produced after the events of the day were tallied up, many of the 30 participants—the vertical bars—found themselves in Union Square at around 3 p.m. Looking at the bottom of the score, we notice that almost as many ended their day riding a cable car home.

Did workshop participants arrive at these common milestones independently? If so, how did they account for that? And what about the time between encounters—did those minutes and even hours of walking help foster community or break it apart? In the end, the Halprin Workshops weren’t fixated on answering these sorts of questions, but it’s nice that they’re remembered for asking them.