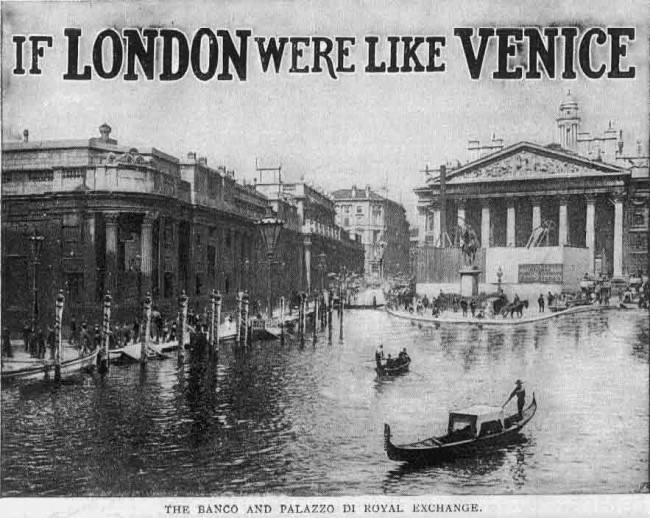 In 1899, Signor Somers L. Summers answered the question ‘If London Were Like Venice: Oh! That It Were’. His article appeared in Harmsworth’s Magazine. Illustrated by Messrs. R. Thiele and Co. It began:

“Geologists say that the land upon which London is built has subsided 68 feet during the last 500 years. This doubtless is traceable to substratiform deposits, lunar attraction, or causes equally occult; but whatever it is, the figures 68 disarm suspicion. Assuming that the subsidence is still going on, one can imagine the metropolis some day sinking below Thames level and becoming a second Venice.”

Summers told the story as if he were a returning to London after a trip far away.

“BUT didn’t you know?” asked my travelling companion.

“No!” I answered. “You see, I left England away back in ’99, and I have been virtually cut off from civilisation ever since. In Siberia the reading of newspapers is not encouraged, and letters, even if you have friends at home to write them, have a way of going astray unrivalled in any other country. Until I landed in Hull this morning, I had not had occasion to use the English language for years. So it is little wonder that what you say is surprising news to me.”

“Quite so,” continued the affable gentleman with whom I shared the first-class carriage,” though we have grown so used to it by this time that we almost forget London ever existed in any other form. Let me see, it must have been in 1910 — the year of the floods — that the last subsidence occurred. It would have come about naturally in time, geologists said, but the climax was certainly precipitated by the Government’s action in allowing London to be undermined to such an extent when the new coal fields were discovered under the city in 1900.

“We had been steadily raising the embankments of the Thames, but the floods swept these away, and one morning we awoke to find our streets converted into waterways. All manner of remedies were tried, including a Royal Commission, which, by the way, decided only last week that nothing could be done, thus endorsing the public opinion of fifteen years ago.

“Of course the lower stories of all houses had to be abandoned, save as diving baths, but it was a simple matter to add others. Naturally the old street traffic almost vanished, cabs, ‘buses, and carts giving place to gondolas and steamboats. To begin with, we had to import gondoliers from Venice, to instruct our late cabdrivers in their new craft, at the same time adopting many other features peculiar to the Bride of the Adriatic. These, as you can imagine, have had considerable influence on our customs, our architecture, and even our language. English is still largely spoken, however.” 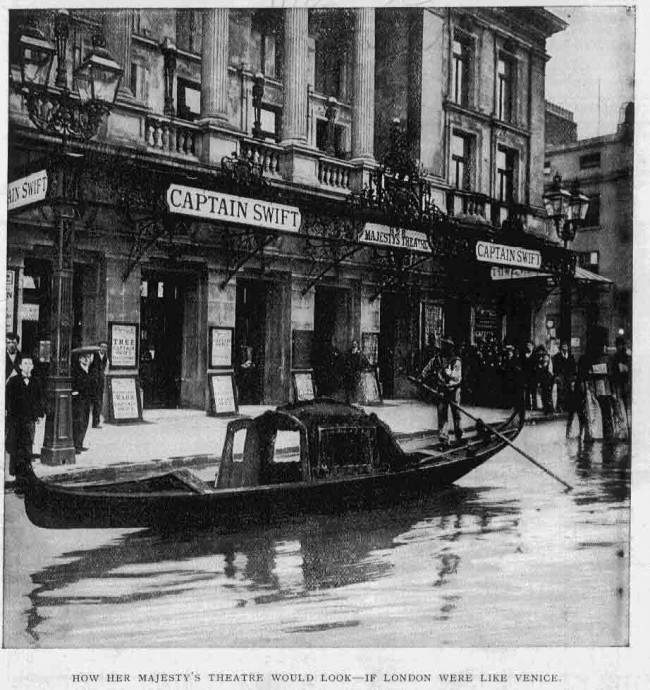 “Come! hand your bags to the servitori, and let me introduce you to the new London, the Bride di Middlesex, as we proudly term our city. You will stop at the Hotel Cecil, on the Canale, I presume. We shall find gondolas at the other side of this piazza.”

Somewhat bewildered, I alighted from the train and followed my friend, having heard him instruct a cut-throat looking ruffian regarding my luggage in a jargon I could not understand. He led the way across a large paved space on to a kind of quay. What he had described was true.

At our feet stretched a shimmering sheet of water, its surface, in our immediate vicinity, black with countless gondolas, the men standing up in them clamouring loudly for custom. My companion beckoned, and a score glided up as though we had pulled as many strings. Entering one, we took our seats in the cool shade of the awning. “Lago di Hyde, Canale del Regente, Lago di Piccadilly, Croce di Charing, and Grand Canal,” called my friend, and away we sped.

I was dumb with amazement. The dull roar of traffic that I had always associated with London streets had vanished as though it had never been. Save for the rhythmical splash of the oars and the low musical voices of the gondoliers as they passed each other or approached a turning all was silent as the grave. 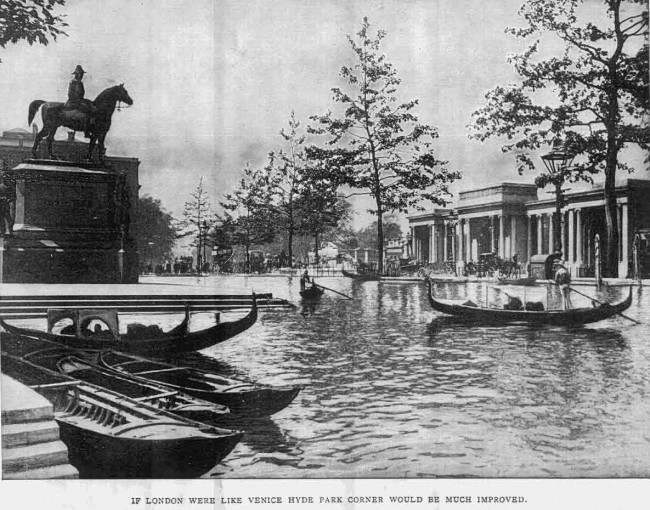 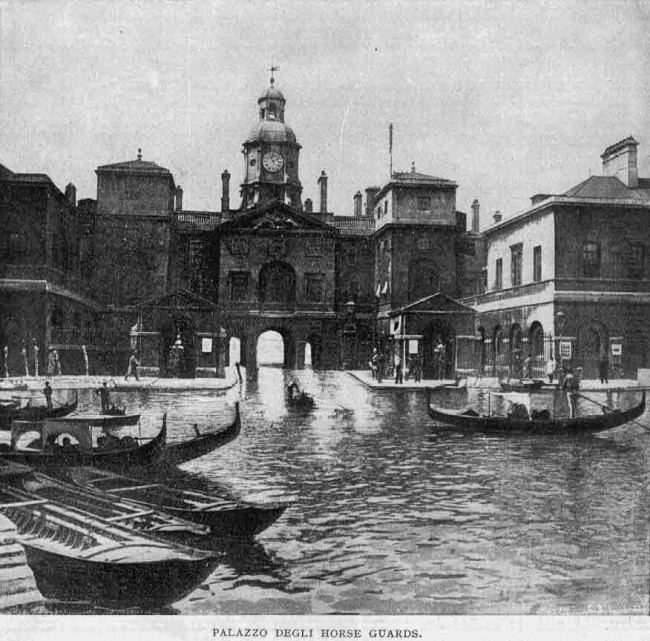 With this pleasantry ringing in our ear we passed under what was pointed out to me as the Bridge of Sighs, but which looked suspiciously like the old Tower Bridge. Now we turned, and ere long we were in another spot familiar to me.

“The Lord Mayor’s Show,” said I, “must be wonderful in these days.”

“Ah, yes; but you should say ‘carnival,’ and the head of the city is now known as the ‘Syndic’ — not Lord Mayor. It was suggested in some quarters that ‘syndicate’ would be more in keeping with the trend of the times.” 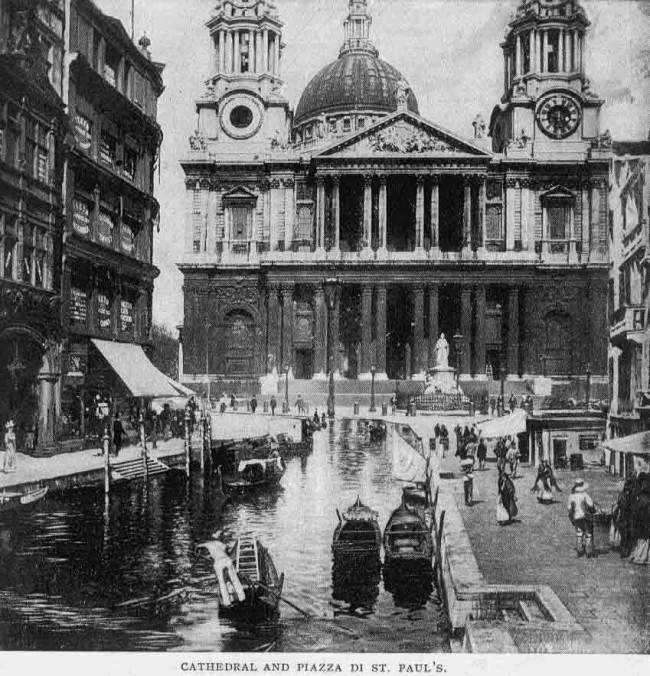 “Has cricket died out in London?” I asked.

“By no means,” was the reply; “on the other hand, we have improved it vastly, thanks to the introduction of water skates and floating wickets, and certainly rendered it far more exciting. I think we shall beat the Australians at the Lago di Lord’s to-morrow. It was very sad; their best bowler slipped on an oil patch and was drowned while playing at the Lago di Oval last week.” 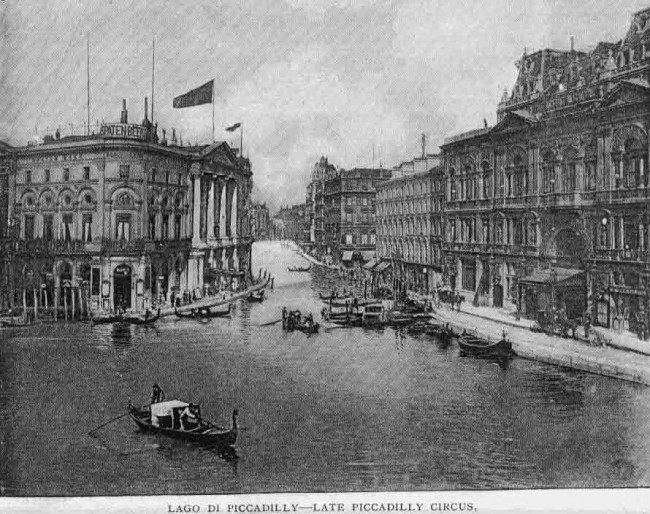 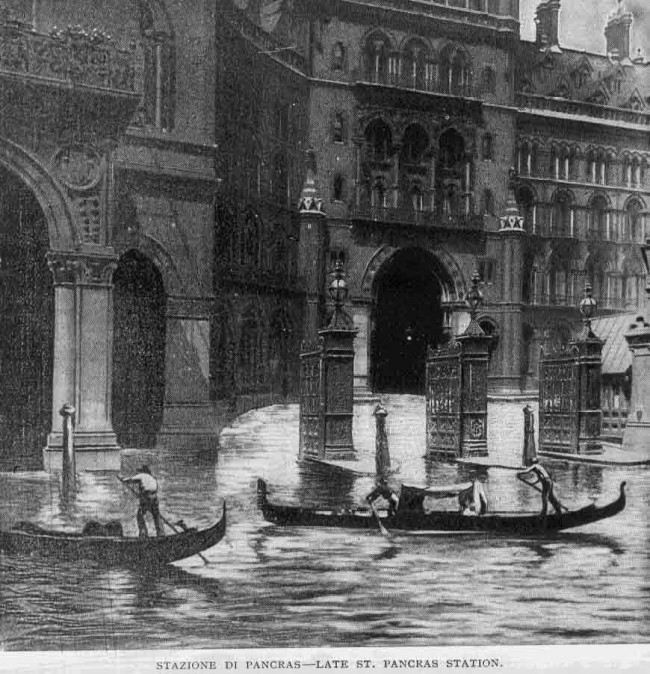 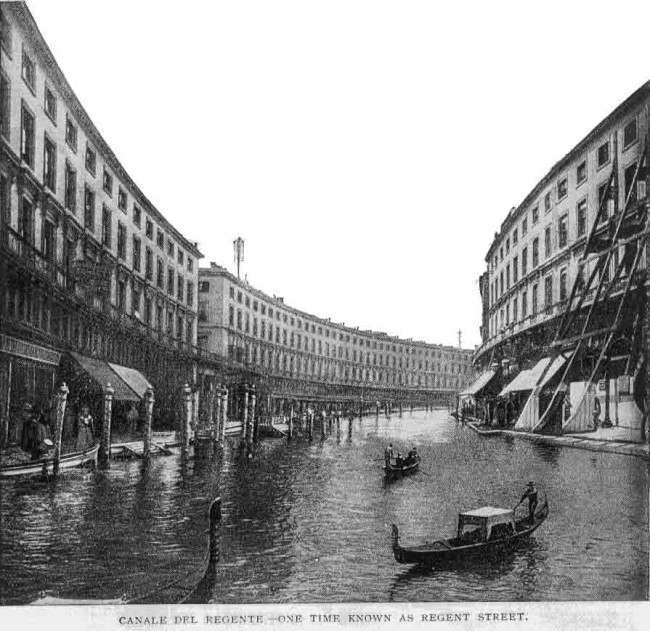 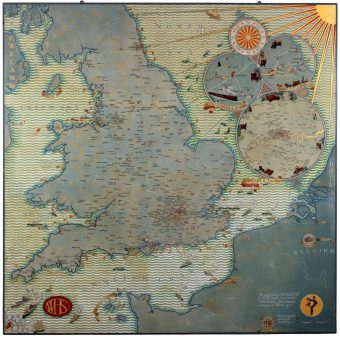