Ah! well a-day! what evil looks
Had I from old and young!
Instead of the cross, the Albatross
About my neck was hung.

– The Rime of the Ancient Mariner by Samuel Taylor Coleridge, 1798 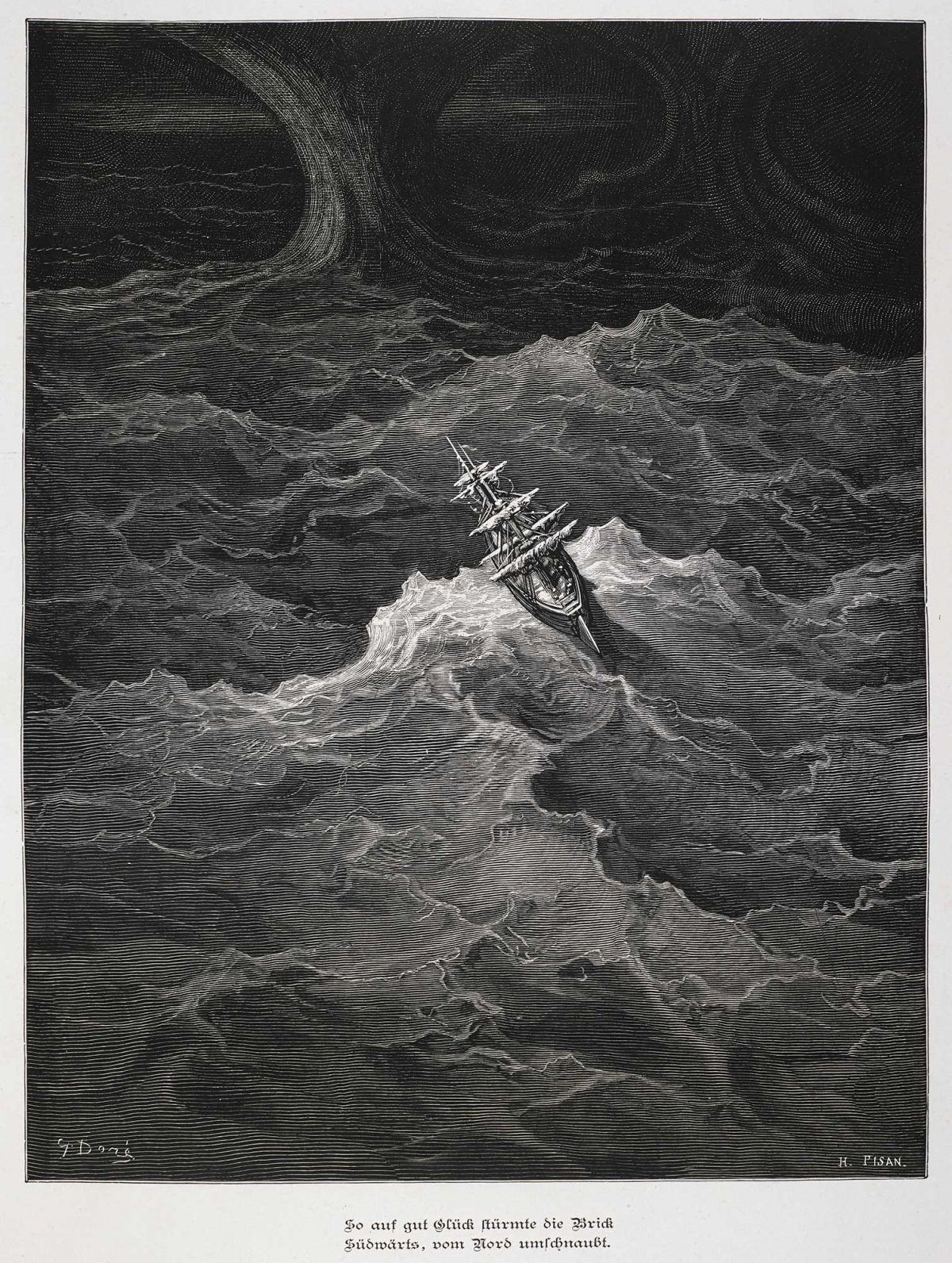 Gustave Doré created these illustrations for a 1877 German edition The Rime of the Ancient Mariner by Samuel Taylor Coleridge. Published as Der alte Matrose in Leipzig, the text was well-suited to Doré’s intense and haunting style. The French artist (1832 – 83) interpreted the conventions of popular Victorian art – fantasy, romance, satire, the medieval and Gothic, the literary and grotesque – as “engrossed with the immediacy of evil, the inescapability of the physical, and the disengagement of morbid humour”.

But can six hundred and twenty-six lines of Coleridge’s poetry be encapsulated in pictures? The University of Plymouth’s The Big Read tried it in 2020 with some success, creating an immersive work of audio and visual art from the 21st century. But it lacks Doré’s texture, the physicality of scratching the Mariner’s story in wood, each cut making an indelible line on the page just as the poem slices into the listener’s mind.

The poem is shag-pile deep in imagery. You can see the bedraggled ancient mariner as he tells his story of pain and fate to the smartly-dressed man on his way to a joyous wedding. You can hear the merry din within the banqueting room as the old man with the “long grey beard and glittering eye” accosts his latest audience on the threshold. First the stranger’s hand is seized and then his mind. He listens, enthralled by the hypnotic tale narrated in a simple balladic metre by the man whose eyes tell of having witnessed things unseen by most. The teller, insistent in his need to tell his hellish story of that ship of fools on their epic journey, whirls his audience off to a mysterious place. “Beneath the lightning and the Moon, The dead men gave a groan.” 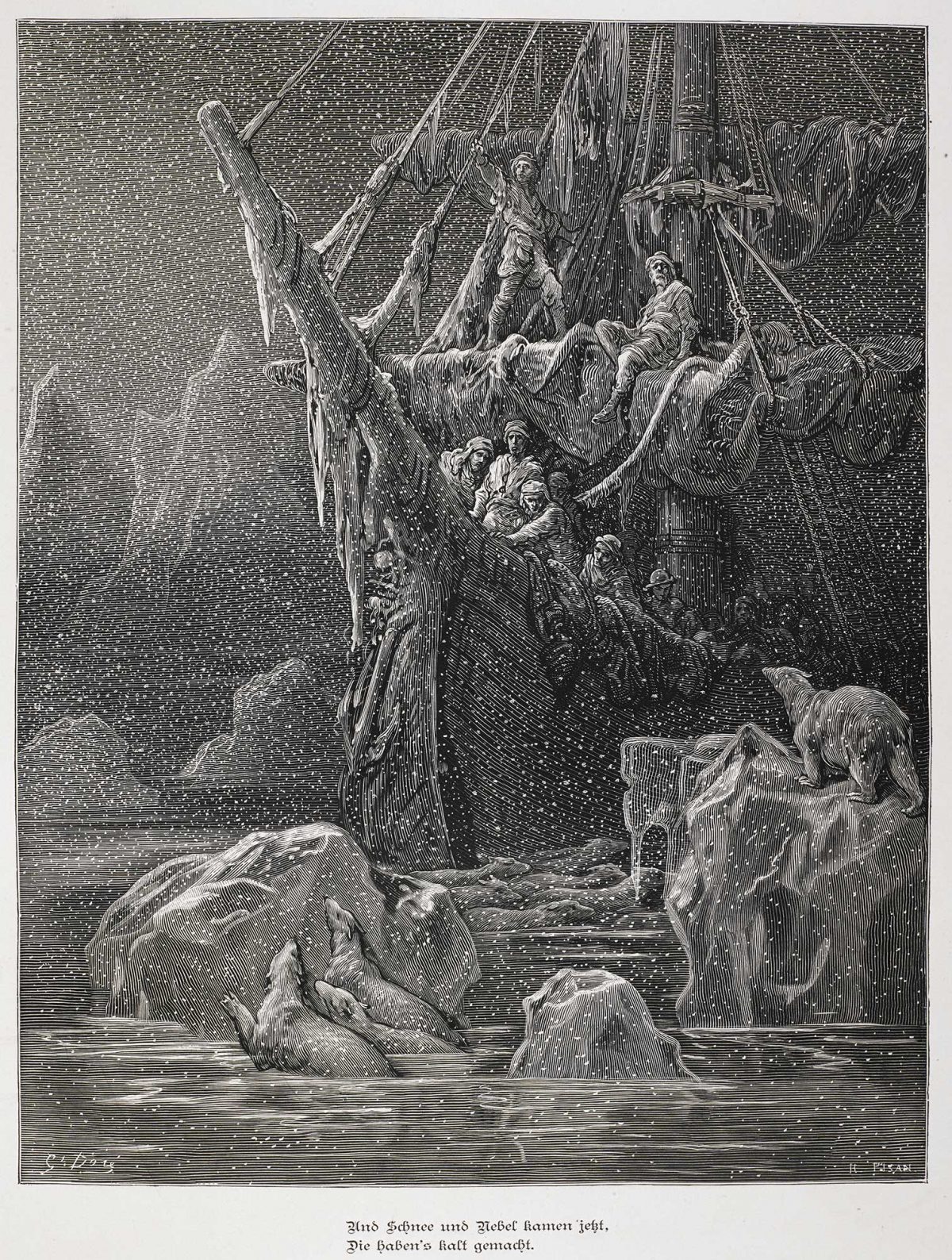 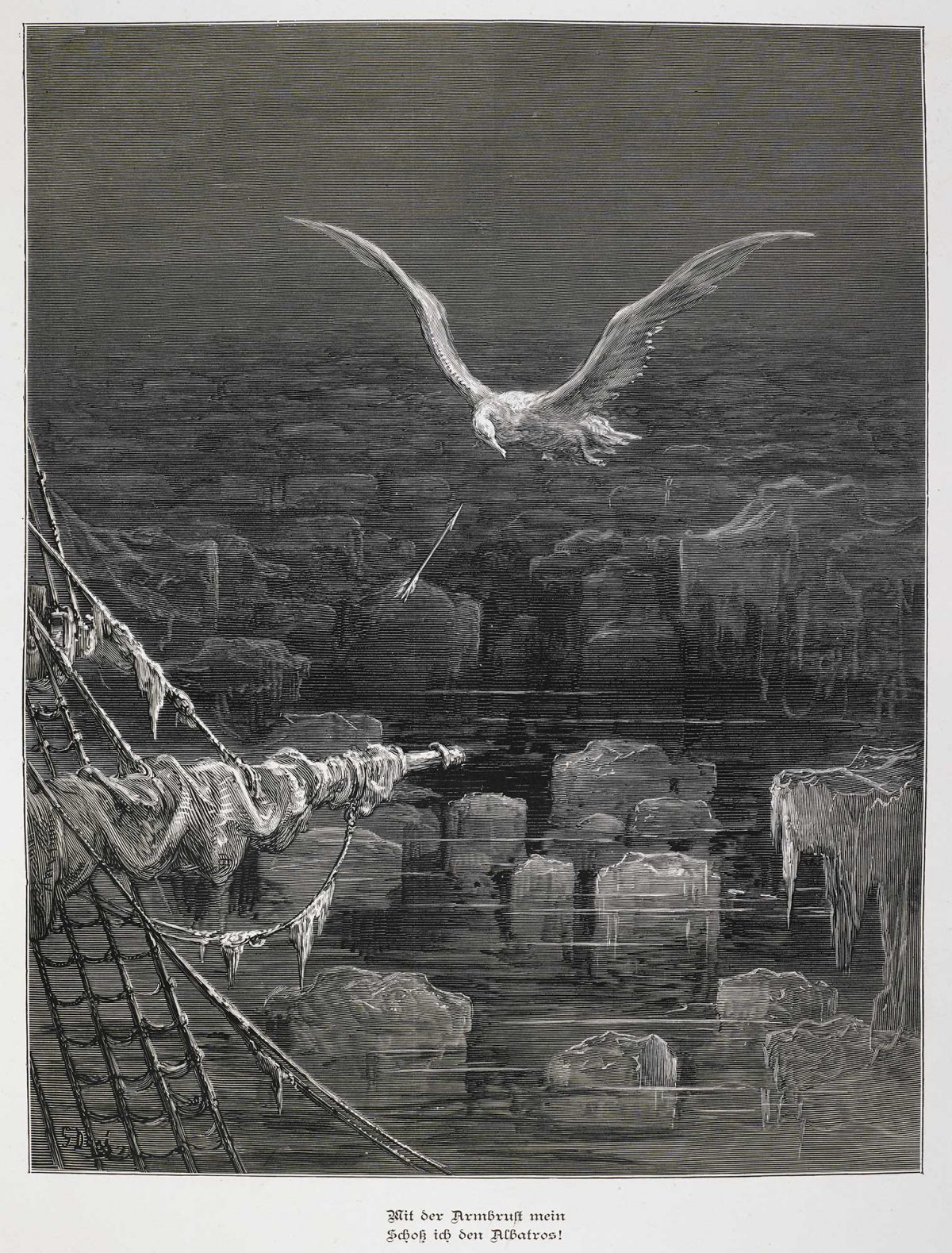 In Biographia Literaria, Coleridge explained his vision for the poem that is the :

The thought suggested itself (to which of us I do not recollect) that a series of poems might be composed of two sorts. In the one, incidents and agents were to be, in part at least, supernatural, and the excellence aimed at was to consist in the interesting of the affections by the dramatic truth of such emotions, as would naturally accompany such situations, supposing them real. And real in this sense they have been to every human being who, from whatever source of delusion, has at any time believed himself under supernatural agency. For the second class, subjects were to be chosen from ordinary life…In this idea originated the plan of the ‘Lyrical Ballads’; in which it was agreed, that my endeavours should be directed to persons and characters supernatural, or at least Romantic; yet so as to transfer from our inward nature a human interest and a semblance of truth sufficient to procure for these shadows of imagination that willing suspension of disbelief for the moment, which constitutes poetic faith. … With this view I wrote the ‘Ancient Mariner’ 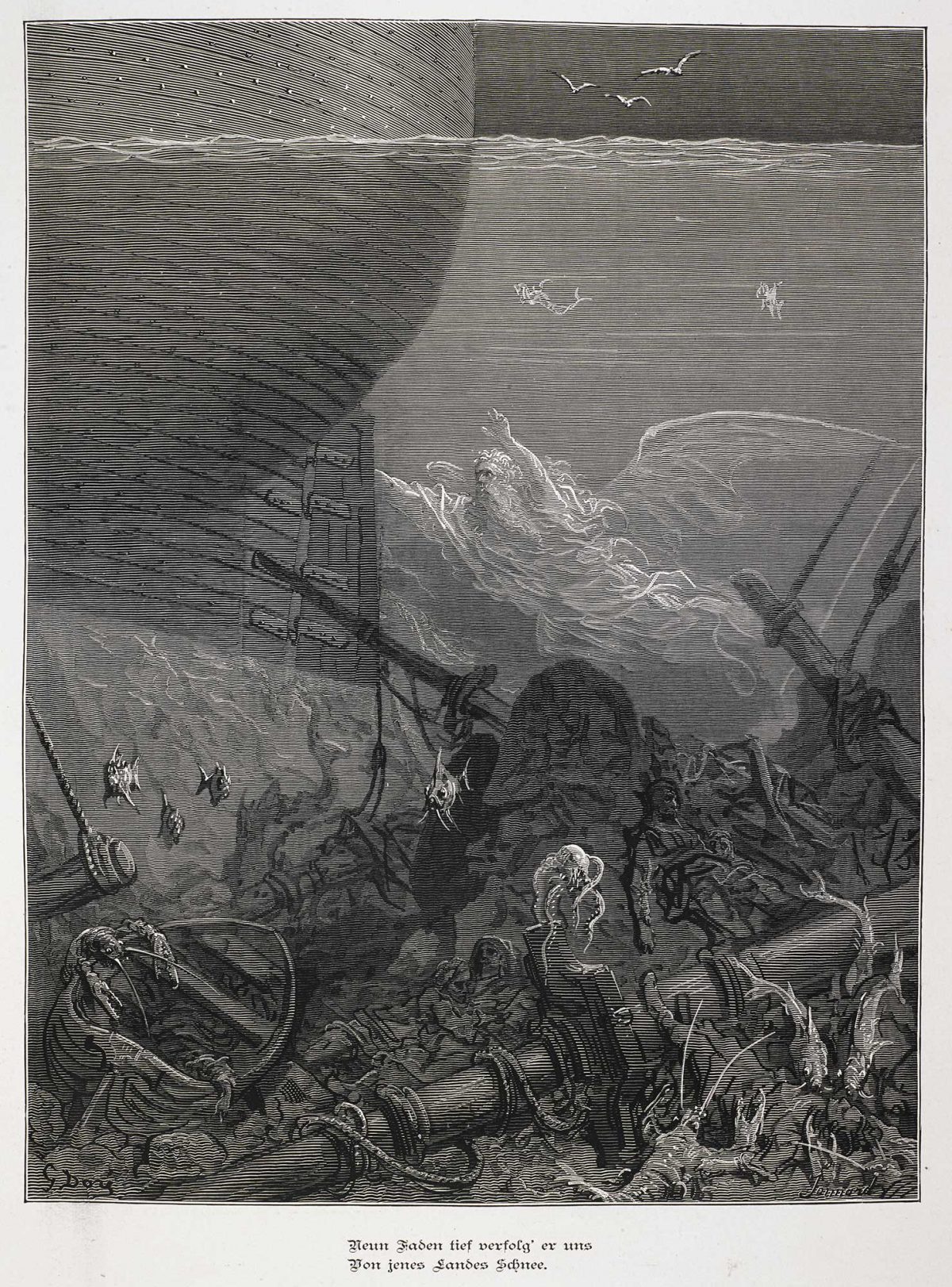 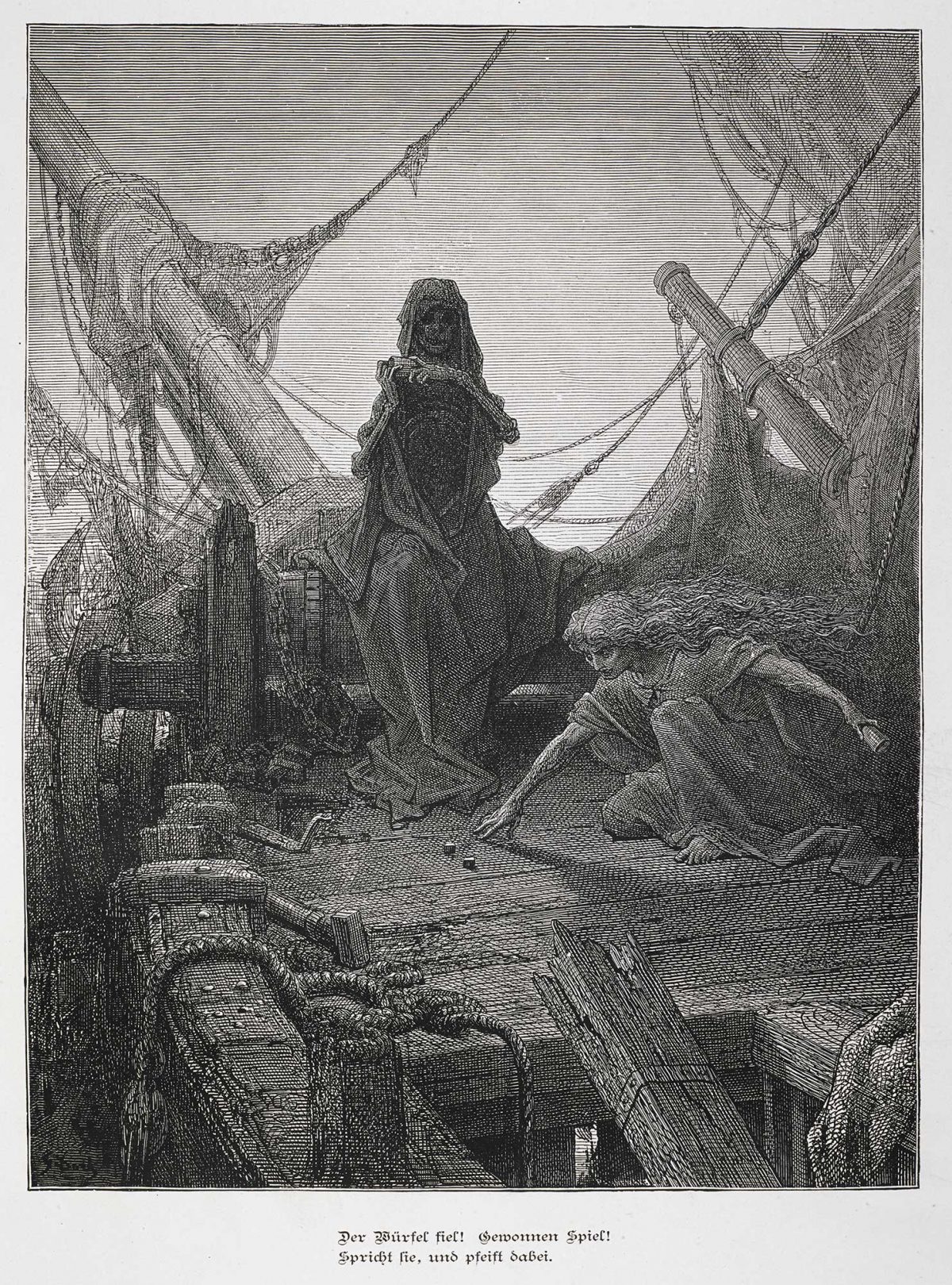 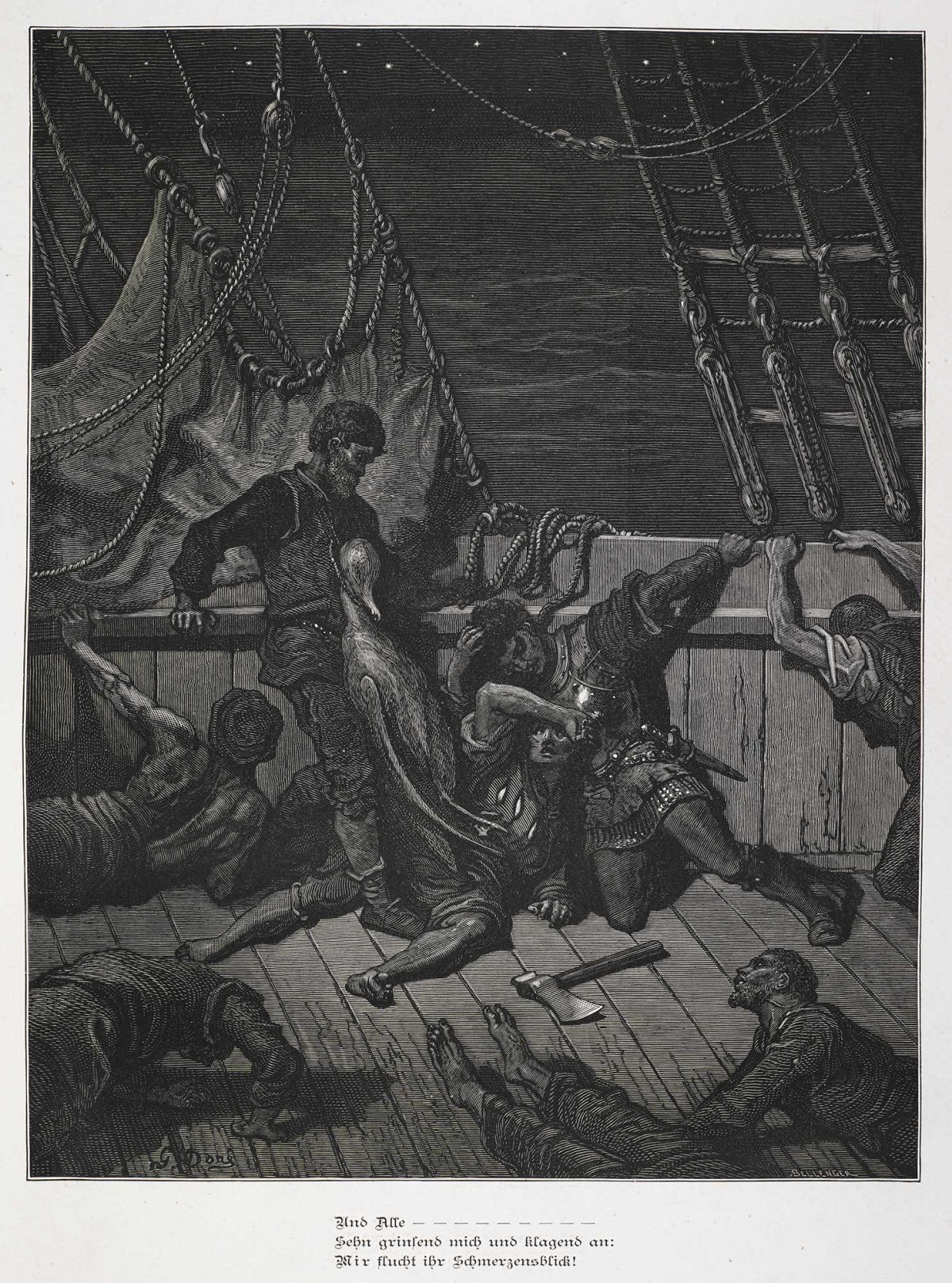 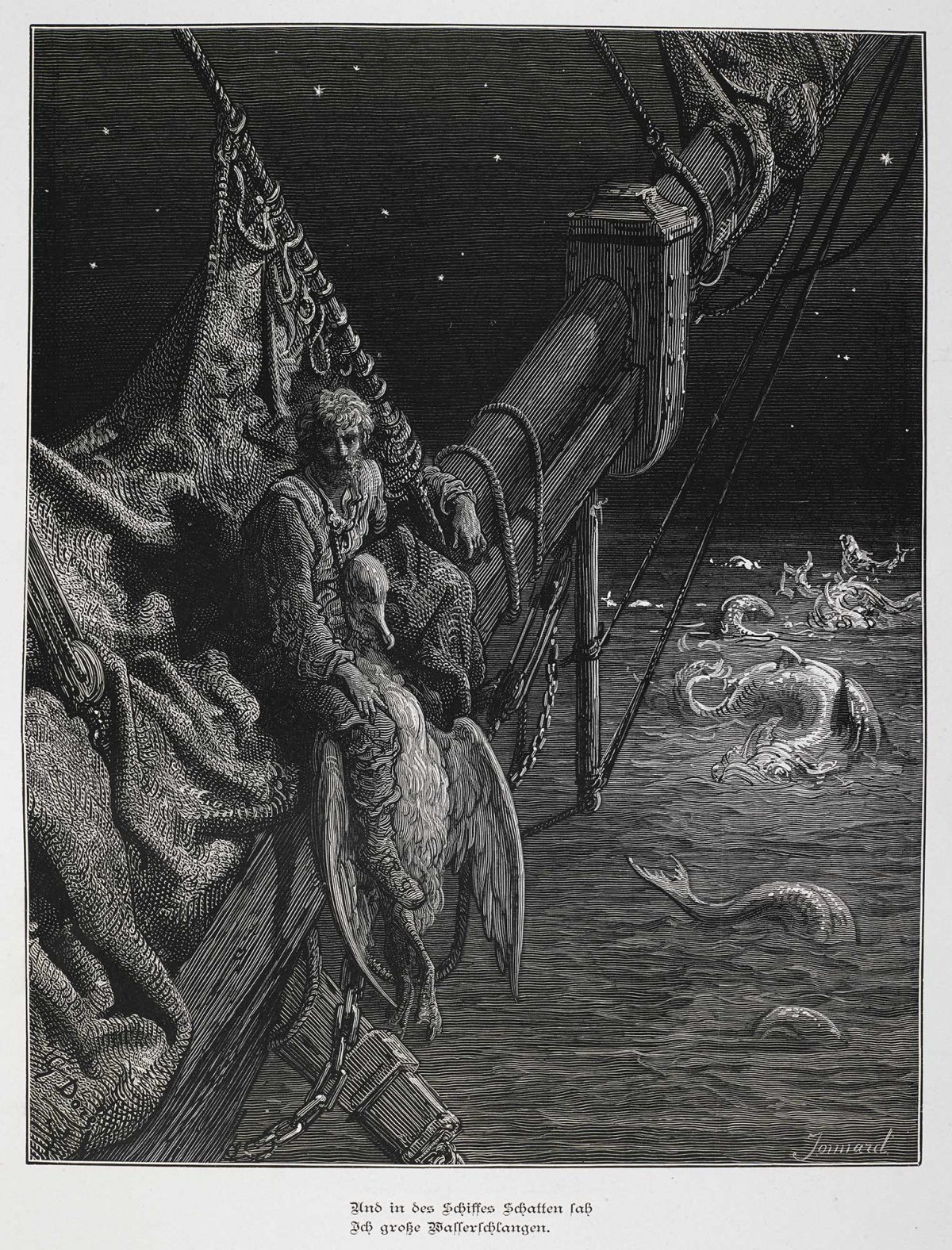 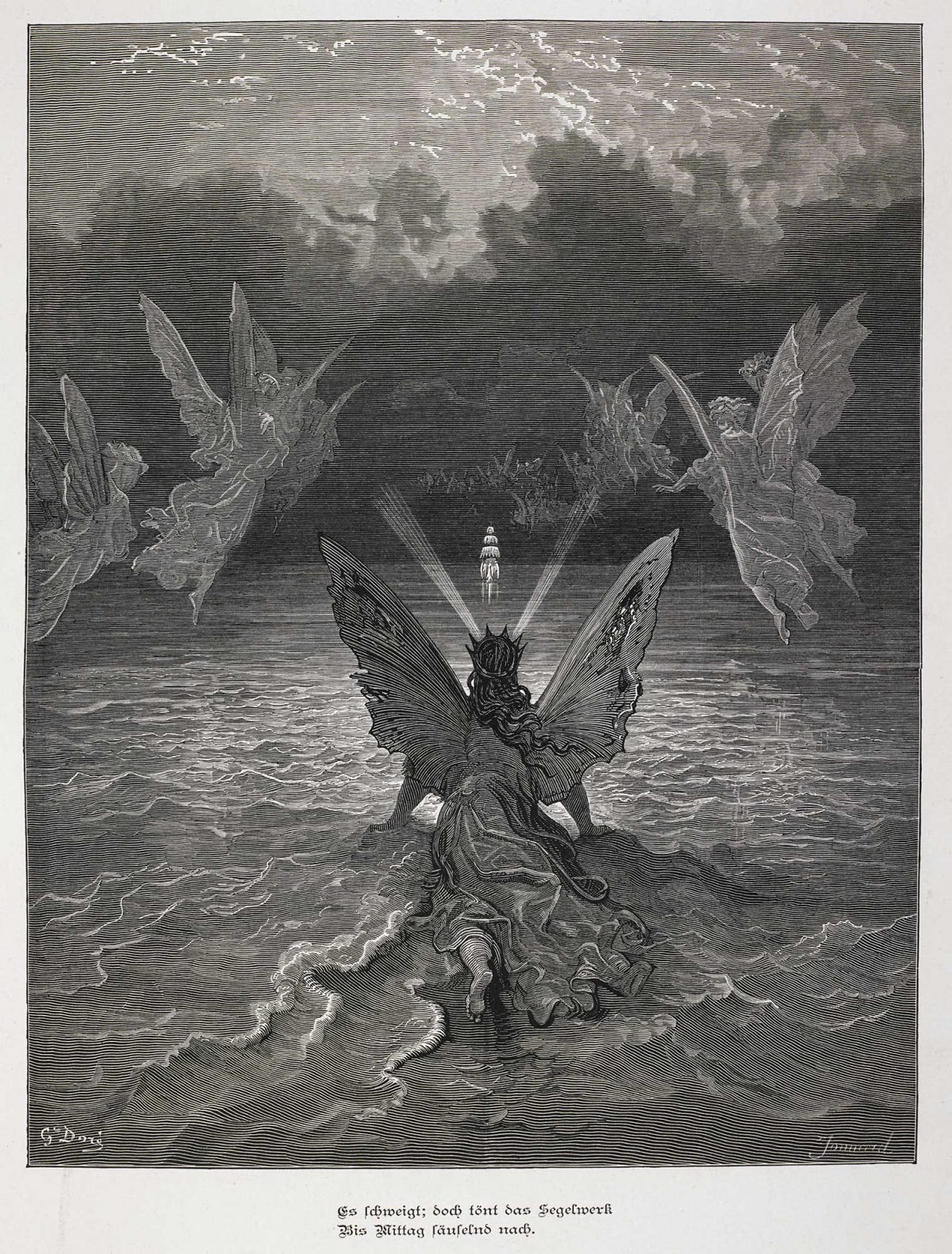 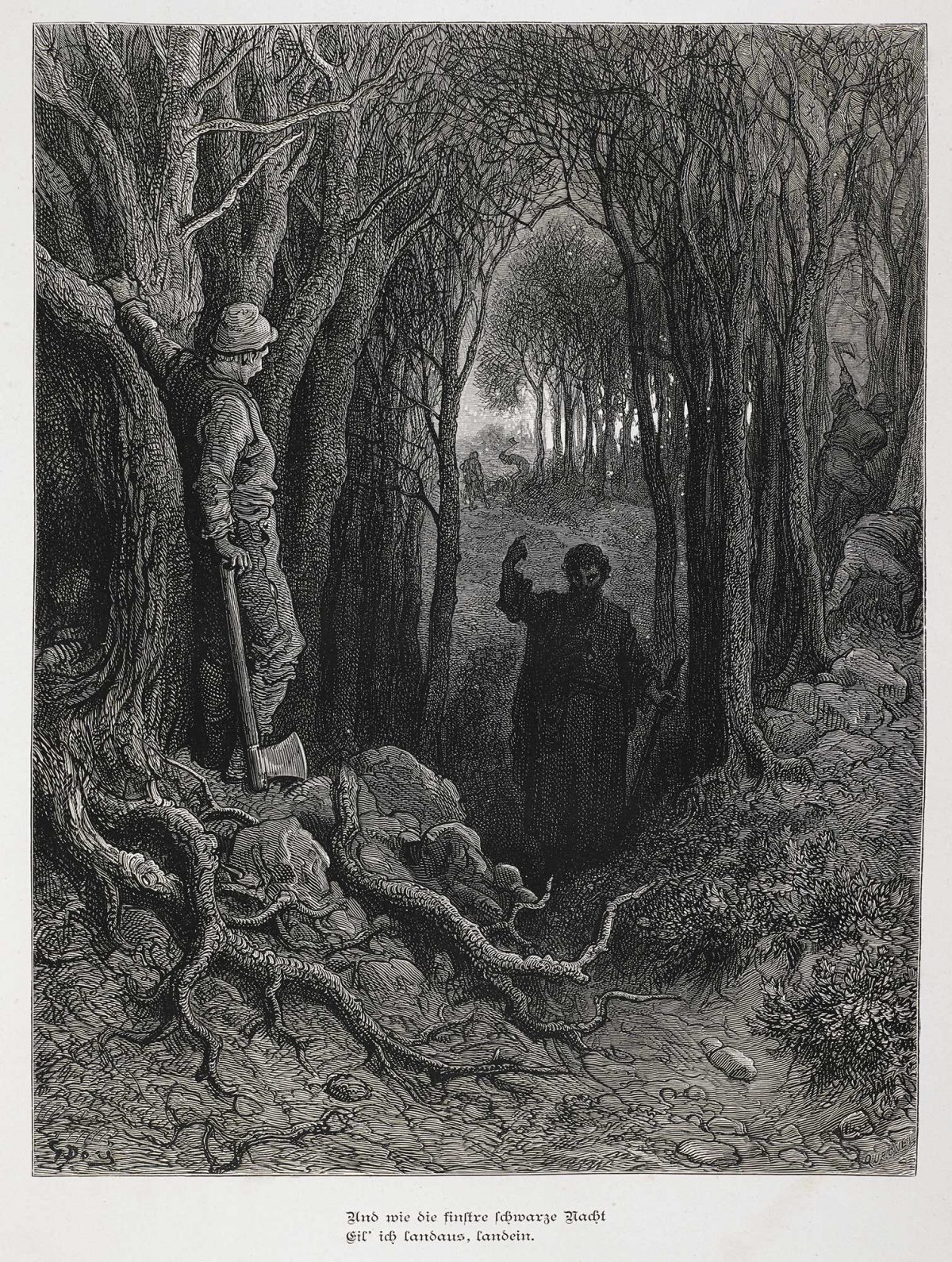 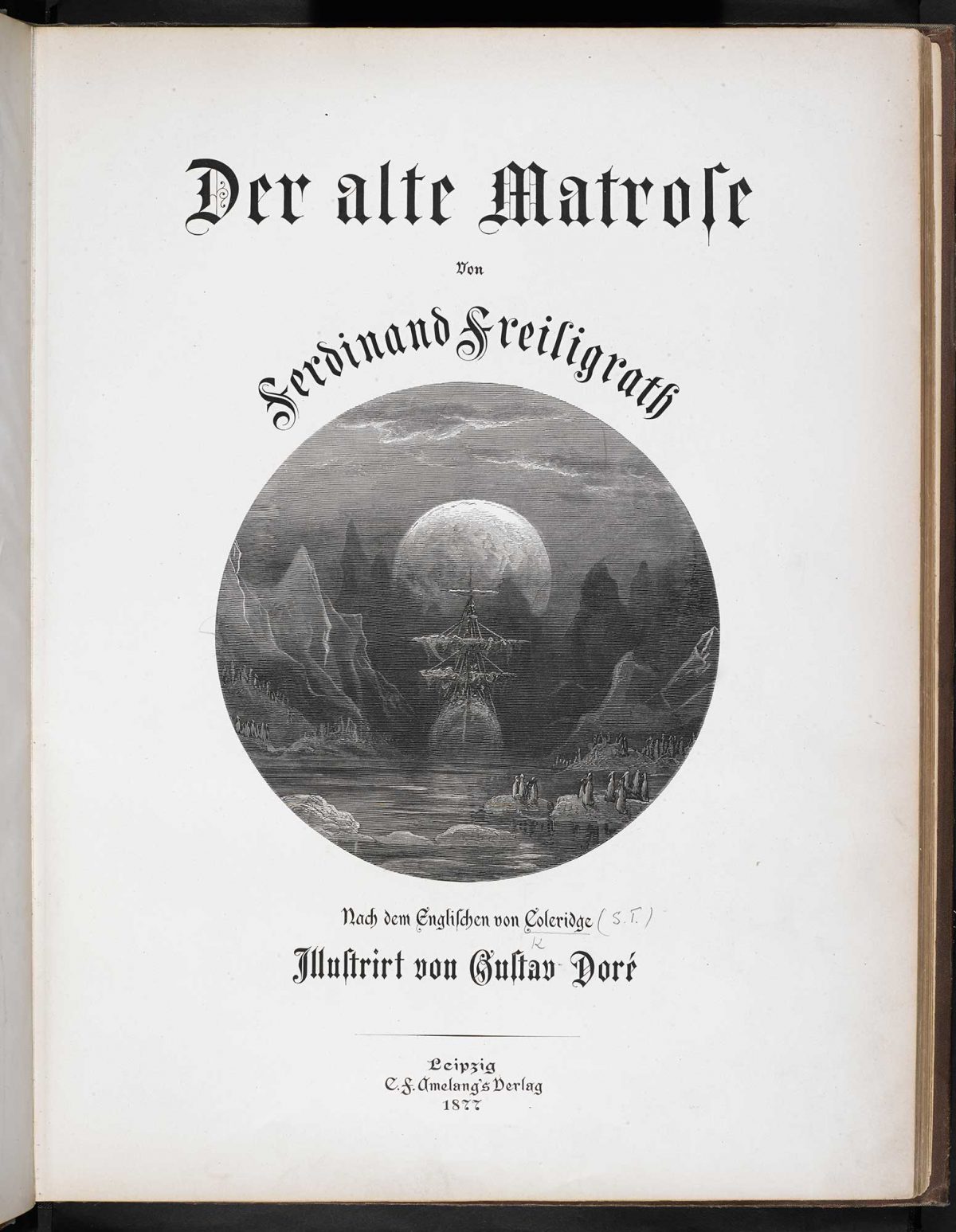 Buy the artist’s art prints in the Flashbak Shop.